To save their moms, these girls skipped Santa and wrote to Ellen instead.

'All I want for Christmas is to know that she'll get to stay in the United States.' 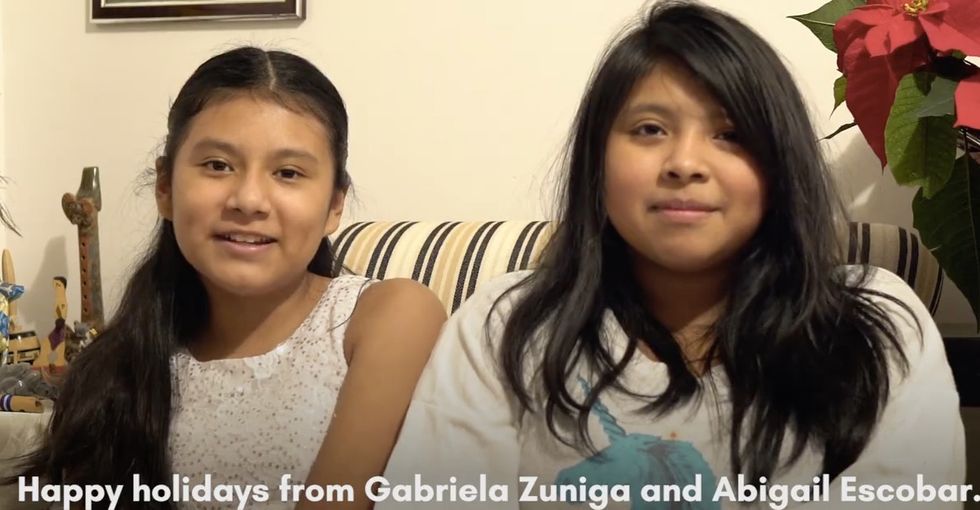 Santa can't bring Gabriela and Abigail what they want this year, so they're taking their Christmas wish to someone equally jolly and warm-hearted: Ellen DeGeneres.

In a new video from MoveOn.org, Gabriela Zuniga and Abigail Escobar read a letter they wrote to the queen of daytime talk shows, asking her to host a DACA recipient for a discussion about why passing the DREAM Act matters. As DeGeneres is a supporter of the DREAM Act and undocumented immigrants, the girls thought she might be up for the task.

You may say I’m a dreamer. But I’m not the only one. #DreamAct

Without the DREAM Act, both girls might soon have to say goodbye to their moms, who could be deported to a country they've never really known.

Both Gabriela's and Abigail's mothers are undocumented immigrants who came to the United States as children. For them and other Dreamers, America is the only home they've ever known. In 2012, after Congress refused to act on granting any sort of protected status or path to citizenship for these immigrants, President Obama announced the Deferred Action for Childhood Arrivals program.

Under DACA, undocumented immigrants who met specific criteria would be allowed to stay while Congress (hopefully) found a long-term plan. That plan never came, and in September of this year, President Trump announced plans to rescind the DACA program, leaving Congress until March 2018 to either pass the DREAM Act or leave people like Gabriela's and Abigail's moms vulnerable to immediate deportation.

As long as Congress won't act, Dreamers' futures remain very uncertain. No family should have to experience this.

After all, it's hard to make any long-term plans when you don't know whether you'll even be allowed to stay in the country or be separated from your children and sent to a country you can't even remember living in.

"My mom says everything is going to be all right," Gabriela says to the camera with a brave smile on her face. "I wish I knew that were true. Ms. Ellen, I need your help to make sure my wish comes true."

While neither you nor I have the kind of reach Ellen does, there are things each of us can do today to help Gabriela's and Abigail's wishes come true. For one, consider calling your member of Congress and letting them know that you support passing the DREAM Act. Another easy thing you can do is to share the girls' video on social media to help spread the word. Time really is running out, but we can't give up.

Watch the heartwarming video below and help these girls get a Merry Christmas in the process.

Dear Ellen, These Girls Have a Letter for You

The best thing you'll watch today: These young daughters of Dreamer moms skipped a letter to Santa this year and instead wrote to Ellen DeGeneres.Watch then show your support for a #DreamActNow: MoveOn.org/DreamAct

Posted by MoveOn.org on Thursday, December 7, 2017