This mom's empowering selfies show off life with an invisible illness.

She has Crohn's disease, but Crohn's doesn't have her. 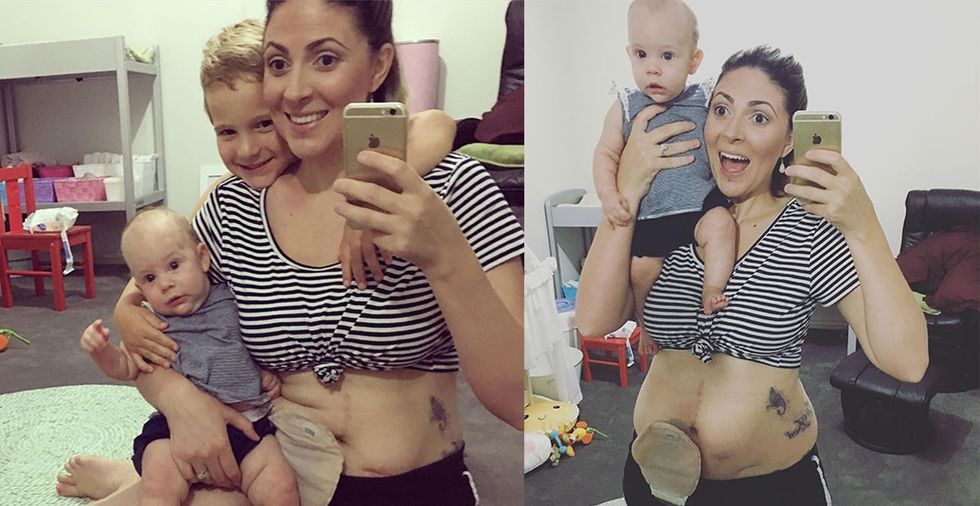 There are a lot of hard things about living with Crohn's disease. Not being able to talk about it might be the worst one.

Imagine being constantly tired, but in a way that even 15 hours of sleep a day can't cure. Imagine going to dinner, but every time you eat something as simple as a roll of warm bread, it feels like it might've had broken glass inside of it.

Then, it's time to go to the bathroom. Again. Is that the fifth time this hour or the sixth? You've lost track. It's a running joke now — your friends think it's funny, but nobody really talks about what happens when you step away. Because, really, you look fine. Just tired.

Crohn's, as defined by the Centers for Disease Control and Prevention, is "a condition of chronic inflammation potentially involving any location of the gastrointestinal tract." But as defined by myself, someone with Crohn's, it's like having food poisoning all the time. The symptoms and presentation are different for every patient, but one thing is the same for all: It's an invisible illness, and it sucks.

And let's face it. Talkin' about your poop is taboo. Especially if you're a woman.

Well, unless you're Krystal Miller.

Stumble over to her Facebook page, Bag Lady Mama, and nearly every post has a reference to doing the doo.

Krystal, who lives in Perth, Australia, has Crohn's. She was first diagnosed at 15 years old, and by 22, most of her intestinal tract had been badly damaged by the disease. At that point, doctors decided to remove large portions of her large and small intestines.

Krystal Miller and her husband, Shannon, son, Lukas, and daughter, Arabella. All photos by Krystal Miller, used with permission.

For the last decade, she's been living with a permanent ileostomy, a surgically made opening in the abdominal wall that connects the lower intestine to an ostomy bag.

Now, at 32, she's sharing her daily experiences through Facebook.

Her posts show raw insight into her world. They're unapologetically blunt, they're full of curse words, and they're gaining traction — quickly.

In an interview with Upworthy, Krystal said she expected to have a few hundred Likes on her page within a month or two of launching it, mostly from close friends who knew about her life with Crohn's. But since it launched Jan. 25, it's reached more than 13,000 Likes.

Check out her posts and you'll see some serious granny-panty love.

"I did expect it to reach Europe and America because I have international friends," she said. "But I never expected for it to be as expansive as it has been. It's crazy — I actually got recognized at my local shops the other day!"

Her photos show off her day-to-day life with her two children, Lukas, 4, and Arabella, five months, and her husband, Shannon. Each is filled with her unabashed love for her body.

Krystal, 32 weeks pregnant and wearing her bag, and her husband, Shannon, during their son's fourth birthday party.

Scars, bag, and the ostomy itself are all on display in the hopes that she can help remove some of the stigma around Crohn's and what life with the disease is like.

It's not a comfortable thing to live with physically or socially. It took years before Krystal was willing to open up about it.

"When I was first diagnosed, I was very uncomfortable. I would be in-tears uncomfortable if someone had to go to the toilet after me. ... And when you're young, it's embarrassing and it's pretty f*cking horrific. It's been slow progress , but I just kind of got sick of caring. Like, who gives a f*ck, it is what it is, I can't do anything about it."

She would go to extreme lengths to cover up the symptoms of the disease, especially when using public restrooms. But she credits the surgery that removed her rectum with alleviating a lot of that embarrassment as well. Once her permanent ostomy was in place, many of her symptoms were alleviated, and her experiences with "number 2" became more matter-of-fact than anything else.

"It's been slow progress , but I just kind of got sick of caring. Like, who gives a f*ck, it is what it is, I can't do anything about it."

From there, it became about reclaiming her sexiness and self-confidence, which started with revisiting how she looked at herself.

"When we look at other women, we don’t see the same flaws that we see in ourself. And I’ve had to retrain myself to see myself the way others might see me, to not notice the finer intricacies that I see on myself. Other people don’t see the sh*t that we see."

But she hasn't stopped there. She also posts fashion tips for other women with Crohn's and shares advice on how to dress the way you want while still being comfortable with a bag.

Krystal does have one thing she wants to say to other people who have Crohn's and other IBDs: It's not always going to be easy, and that's OK.

Oh, and one more thing — she's got a hashtag for the world: #bagbitchesrock.