This lovable grandma turned her daily 3-mile walk into a personal crusade against litter.

Litter is more than just ugly — it can be dangerous too. 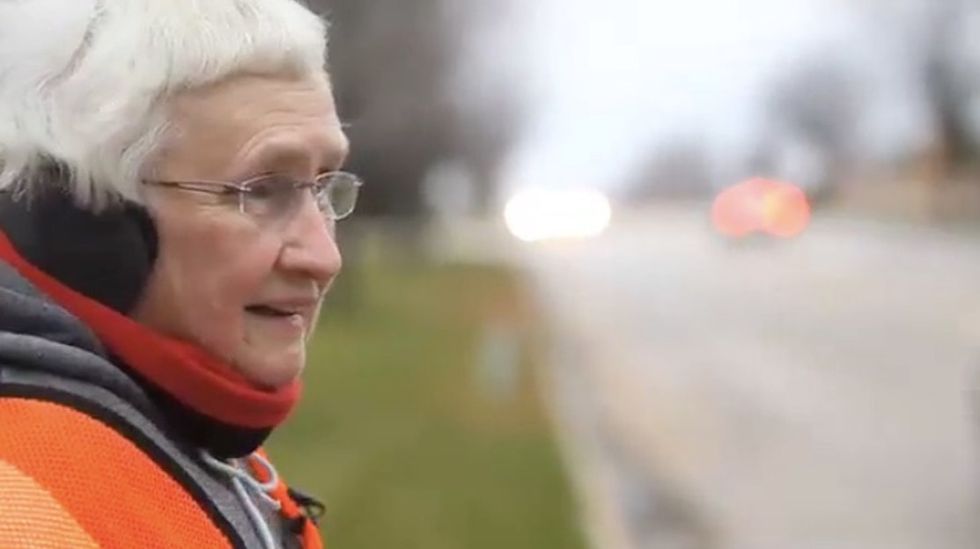 I try to keep my desk organized. There are my books to my left, my computer in the middle, and my lamp and notebook to the right. I like it that way — being tidy just feels right.

Larie's also a fan of tidy.

Larie McKeever is 80 years old. Every day she dons an orange safety vest, grabs a couple of trash bags, and takes a three-mile walk along Golf Course Road in Crystal Lake, Illinois. Along the way, she makes her neighborhood more beautiful by picking up litter and garbage.

“I try to leave the house as soon as it’s light outside,” Larie told the Northwest Herald. “But if I open my door and it’s pouring down rain, I won’t walk. Then again, if it starts raining while I’m on my walk, I won’t turn back.”

Larie finds all kinds of things.

You'd be amazed at what people throw away. Some of it is pretty normal — candy wrappers, for instance — but Larie's found driver's licenses and credit cards, too. She turns them in, of course. She also picks up aluminum cans, which are sold for recycling (the money goes to a local food pantry).

Her walks are even good for her heart.

Larie has a condition known as aortic stenosis. One of the valves out of her heart doesn't work quite right. But the daily exercise is great for her.

Larie's instinct for picking up trash has been with her for years, handed down from her father.

As she and her dad walked to his work every day in Story City, Iowa, they'd pick up any litter they'd come across.

"I think about my dad a lot when I'm walking," Larie told the Northwest Herald. "I think about how proud he would be that I'm still picking up litter, all these years later."

Wouldn't it be amazing if we had a million of her?

Because we could certainly use them. If you're a neat freak like me, you might not want to read this next sentence.

According to Keep America Beautiful, the average mile of roadway in the United States has over 6,500 pieces of litter on it.

That's more than one piece per foot! All together, that adds up to more than 50 billion styrofoam 44-ounce soda cups, grease-stained fast food bags, and cigarette butts mucking up our beautiful country.

Litter is more than just ugly — it can be downright dangerous.

"There's AAA research that shows that people have accidents as a result of litter," said Cecile Carson, senior director of affiliate development at Keep America Beautiful, a nonprofit dedicated to making littering unacceptable.

If a piece of trash flies out of the back of a pickup truck, for example, it could hit another car and cause a crash.

Of course, litter hurts the environment, too. Broken glass and bits of metal can cut people and pets. Plastic and cigarette butts end up in animals' stomachs. And anything on the road can end up in our water supply.

When you really love a place, you want to keep it clean. And this can have a big effect.

Keep America Beautiful has done a lot of research on this fact, and they say the problem is mostly individual people's behavior.

"Littered environments attract more litter," said Mike Rosen, a senior VP at Keep America Beautiful. "So if you can decrease the amount of visible litter, you can begin to change attitudes and change behaviors."

Before and after a cleanup. I wouldn't want to walk down "before," but I'd be real happy to have "after" in my neighborhood. Image used with permission from Keep America Beautiful.

Furthermore, if people see their neighbors and community members making an effort to go out and clean up, that also makes people think twice before littering.

"It personalizes it," said Cecile. A litterer might say, "Oh, that's the Kiwanis Club, that's the 4-H – I'm not going to litter on those people."

People like Larie — and anyone dedicated to stopping litter — deserve some recognition for keeping our country beautiful.

It's one thing to decry litter and trash, but it's quite another to go out and do something about it yourself. Larie's already inspired others in her community to pick up junk as they walk too, but imagine what America's streets would look like if everyone were as dedicated as Larie.

"I just like seeing the parks and streets cleaner," Larie said. "I don't like litter; I never have."

Watch Larie in action below.