This is the pentaquark. It's smaller than an atom, and until now, no one knew it existed.

It could teach us a ton about the universe. 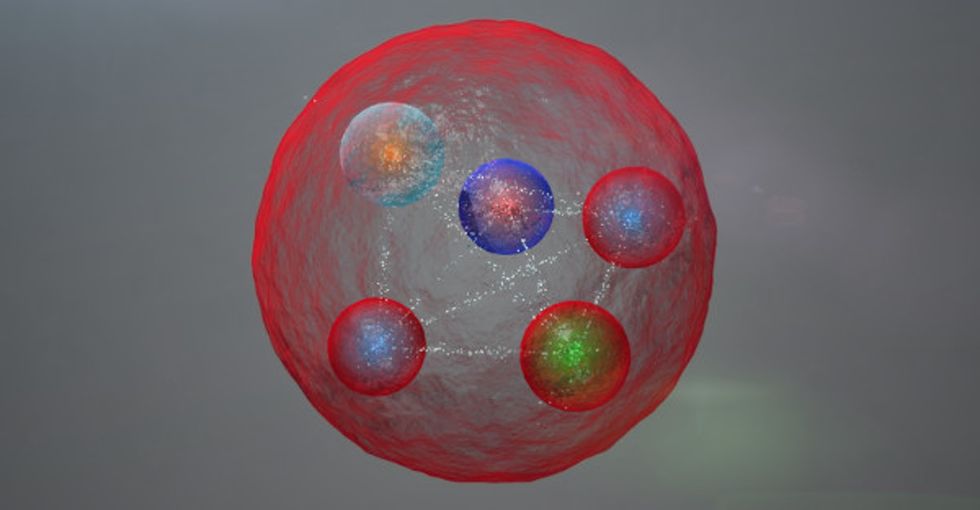 This is an image of an elusive, smaller-than-microscopic particle that not a single scientist on planet Earth knew existed before now.

It's called a pentaquark.

Scientists have been looking for it for a little while. But thanks to the Large Hadron Collider at CERN in Switzerland, we now know that it's a real thing. Like, for real for real.

Pentaquark? Hm. I guess I've heard of quarks. Is it kind of like that?

Yes! Quarks are essential building blocks of pretty much everything in the universe. If you stick three quarks together, you get a proton or a neutron. Stick a bunch of protons and neutrons together, slap on an electron or two or 37, and you get an atom.

There must be a German word for the specific mix of shame and pride getting this joke is probably conjuring in you. Image by Jonathan McIntosh/Flickr.

The discovery happened because, thanks to the Large Hadron Collider, scientists finally had the tools they needed to actually look for the thing. According to a CERN press release, "It's as if the previous searches were looking for silhouettes in the dark, whereas LHCb conducted the search with the lights on, and from all angles."

The Large Hadron Collider is awesome.

In case you haven't heard of the Large Hadron Collider before, it's basically a giant particle accelerator that shoots two high-energy beams of tiny, ultra-microsopic matter at each other through ultrahigh vacuum tubes and around superconducting electromagnets at -271.3 degrees Celsius, which is colder than space.

And the only reason it exists? To smash tiny particles together.

And the only reason it smashes tiny particles together? To discover awesome new things about science.

Scientists will have to study the pentaquark for a little while longer before they figure out what its existence really means.

It's not immediately clear what exactly the point of pentaquarks are or why they matter. But the fact that they exist opens up a vast world of research possibility that didn't exist yesterday.

Eventually they could lead to all sorts of cool stuff.

For now, thanks to CERN and the Large Hadron Collider, we just get to enjoy the pentaquark.

And let's face it. We've earned it.