This group found a simple way to get messages from homeless people to their families. 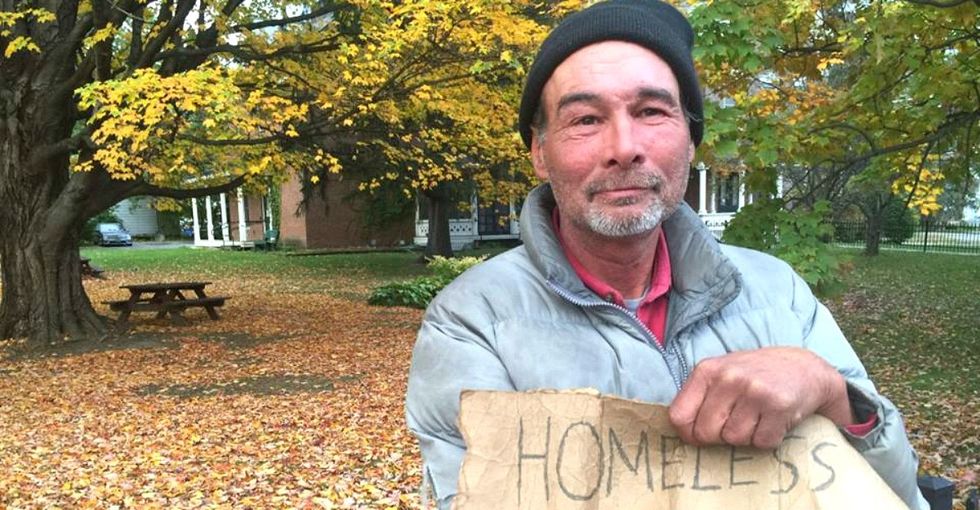 He remembered everyone's birthday and gave thoughtful gifts. One year, he gave Kevin an eagle bandana because Adler means "eagle" in German.

Mark also had mental health problems throughout his life. He was schizophrenic and often in and out of homelessness.

10 years after his death, Kevin and his father visited Mark's gravesite. It was Kevin's first time doing so. In fact, he didn't even known his uncle had one. Mark was estranged, but the family felt it was important "that he not be forgotten," as Kevin's father put it.

This got Kevin thinking about all the people without homes in the world (over 100 million according to the last attempted global survey) who either have a mental illness or are simply down on their luck and are disconnected from their families. Then, he thought about how easily he and his friends and family connect via social media — a power few homeless people are probably able to harness.

It wasn't until Kevin launched an art project for his church, however, that he found a way to change this.

He wanted to show his fellow churchgoers what it was like to see the world through a homeless person's eyes.

It was called Homeless GoPro and involved homeless volunteers wearing GoPros to show what a day in their lives looked like.

While working with them, Kevin kept hearing iterations of this sentiment: ​"I never realized I was homeless when I lost my home but only when I lost my family and friends to support me."

That's when he realized he could do a great deal more for them using the same camera and his Facebook account. He could record their stories and send them out on social media to help try and find their families.

He would end up calling the project Miracle Messages.

“That’s my daughter. I love her. And for Father’s Day she actually gave me a foot imprint. But I have a good friend who...

Kevin decided to test out his idea in San Francisco around Christmas in 2014.

He walked down Market Street and asked every homeless person he came across if they'd like to leave a holiday video message for a loved one.

That's when he met Jeffrey.

"I started talking to him," said Kevin. "He was a little bit out of it, but once I asked him about his family, he got incredibly lucid. He looked me right in the eye and said, 'I haven’t seen my family in a long time.'"

Kevin asked him if he'd like to record a video message for his sister and father (the family Jeffrey remembered) that Kevin would then use to try and locate them. He said "yes," and Kevin obliged.

That night, Kevin went on an internet search for Jeffrey's family. He found a group on Facebook associated with Jeffrey's hometown in Pennsylvania and sent them a message asking if they wouldn't mind sharing the video. They agreed, and within minutes, comments from locals started pouring in. After 20 minutes, his sister was tagged.

On Christmas Eve, Kevin got on the phone with Jeffrey's sister and learned that Jeffrey had actually been a missing person for 12 years. Three weeks later, Jeffrey's hometown ended up raising $5,000 to bring him home and rehabilitate him.

The reconciliation felt too good to be true. Kevin was able to change Jeffrey's life with his simple idea.

St. Anthony's has been serving food to the homeless since 1950. At first it seemed like no one was interested, but then, just as he was leaving, one man named Johnny took him up on his request to record a message.

He hadn't seen his family in 33 years and had been listed as missing person for 20. Kevin followed the same procedure he had enacted in Jeffrey's case, and within three weeks, all four of Johnny's brothers and sisters got on a plane to San Francisco with their families and reunited with Johnny in person.

According to Kevin, while he was in the hotel room with them all, Johnny looked at him and said, "Thank you for giving me my family back."

Out of the 45 video messages sent by volunteers at Miracle Messages, there have been nearly 20 reunions.

Perry's reunion with his son, Joseph. Image via Miracle Messages/YouTube.

Eight of those 20 have led to stable housing.

But the organization has much bigger plans.

Their goal is to reunite 1% of the world’s homeless population — that’s over 1 million people — by 2021. That may seem lofty, but considering how much they've already accomplished, it's not impossible.

Over 5,000 people have already reached out wanting to start chapters of Miracle Messages in their own communities.

There are still a few kinks to work out, like having a clear model for how to get consent, record, and upload videos to the proper channels, but people are motivated. These reunions are making so many lives better, homeless and non-homeless alike. The more people who can be brought back to their families, the more people will find their way home.

If you'd like to help this volunteer-based organization, you can donate to their site and learn more about volunteering here.