This Fox News host roasted Trump over his Charlottesville response. It's a must-see.

'You’ve decided that the portion of your base that is absolutely racist is so significant, so valuable that you hesitate ... to risk turning them off.' 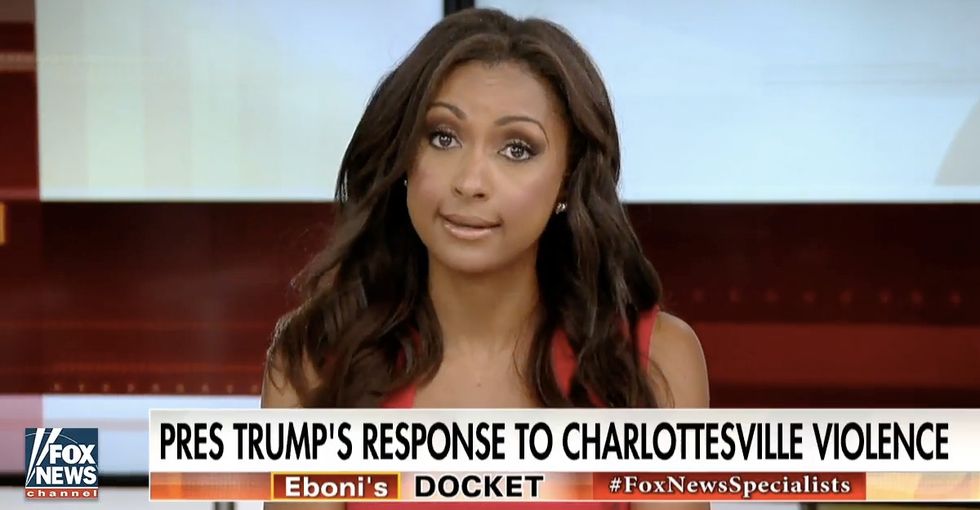 It's not every day you see a Fox News host take Donald Trump to task, but Eboni K. Williams did just that on the Aug. 14 episode of "Fox News Specialists."

After Trump's tepid response to white supremacist violence in Charlottesville, Williams — who, like many on the network, is generally pretty supportive of Trump and his agenda — tore into his "cowardly and dangerous" remarks. She was speaking, of course, to Trump's "many sides" comment on Aug. 12.

While Trump somewhat begrudgingly offered a more straightforward denunciation of white supremacists and Nazis on Aug. 14 (followed by a tweet calling the media "truly bad people" for not cheering his initial remarks), the damage had already been done.

Williams touched on a fear held by many related to Trump's "Make America Great Again" slogan: who, exactly, is included in this "great" America?

"Were Jews, Blacks, gays, and Hispanics included in the return of America to her glory years?" she mused. "Or would some of us be left out?"

"In a moment where you could have been crystal clear where you stand on the issue of inclusion, standing up against white supremacy and domestic terrorism, you very intentionally chose to be ambiguous and equivocate," she said.

Is Trump racist? Williams wouldn't go so far as to label him as such, but she did point out that Trump is "all too happy" to win the support of racists.

"President Trump, I do not know your heart, but what I do know for sure is that you’ve clearly done the math," Williams said. "You’ve decided that the portion of your base that is absolutely racist is so significant, so valuable that you hesitate ― even in the face of blatant, flagrant hatred ― to risk turning them off and thereby crippling your political stronghold."

Ultimately, the problems caused by Trump's decision to pander to racists can be solved by just one man: Trump himself.

Given his penchant for catching a few hours of cable news throughout the day, this blistering segment might have been the most important thing he heard on Monday.

"You are uniquely positioned to forcefully call out evil, anti-American domestic terrorists," Williams urged. "We certainly cannot change what we fail to acknowledge. I am asking you to address their anger, their misplaced fears. Let them know this is America, land of opportunity, and there is indeed enough to go around."