This depressing Hogwarts acceptance letter is going viral. You should read it. 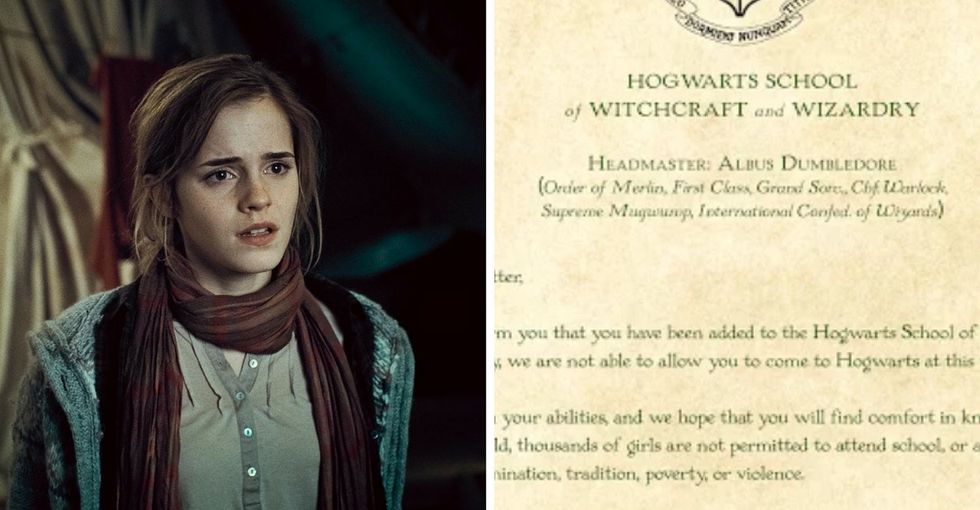 Can you fathom the wizarding world of Harry Potter without Hermione Granger?

Just imagine the disaster and horror that would await Harry and Ron if Hermione wasn't on that train!… https://t.co/AYCDniuOHM
— Susannah Choate (@Susannah Choate)1504286781.0

It's a thought that's horrified plenty of people online this week.

Gaining steam under the #WithoutHermione hashtag on Twitter, Potter fans discussed all the bone-chilling ways the series would have been different without its leading witch.

The consensus? The books would have been an awful, incomplete tale that left the magical world a complete mess.

Fans are pondering the unnerving premise thanks to an acceptance letter from Hogwarts' Professor McGonagall that went viral on Sept. 1.

"We are pleased to inform you that you have been added to the Hogwarts School of Witchcraft and Wizardry Waitlist," McGonagall begins. "Unfortunately, we are not able to allow you to come to Hogwarts at this time."

Image via The HP Alliance.

As the letter goes on to explain, getting waitlisted at Hogwarts wasn't a reflection on the applicant's abilities — it was a reflection of their gender.

"Around the world, thousands of girls are not permitted to attend school or are unable to finish their schooling due to discrimination, tradition, poverty, or violence," the professor noted.

The faux-acceptance letter was sent out by the Harry Potter Alliance for a new campaign in conjunction with She's the First encouraging supporters to use the hashtag to spread the word.

"What would the wizarding world look like without Hermione? What about without Luna? Or Ginny? Cho? Angelina? Tonks? McGonagall?" the campaign website reads.

"Hogwarts doesn't work without witches. Harry's story falls flat without heroines. Yet all over the world, girls and women are being kept out of classrooms and losing the chance to lead."

She's the First is focused on helping girls around the globe overcome the barriers they face in reaching graduation day.

Unique cultural challenges keep girls and young women out of the classroom. Factors like early marriage and high costs associated with schooling disproportionally affect girls, hindering them from gaining economic independence and pulling themselves — and thus, their families and communities — out of poverty.

"Girls are more likely than boys to remain completely excluded from education despite the efforts and progress made over the past two decades," a 2016 report by UNESCO found.

That's why groups like She's the First are so instrumental in making a difference.

The organization funds scholarships and mentorships for girls in developing countries, as well other basics that students need to stay focused on their studies, like medicines, school uniforms, and healthy food. And you can get involved too.

Share the Hogwarts acceptance letter on social media, learn more and expand She's the First's efforts around the globe, and stay up to speed on the issue by following Potterwatch — an online effort by the Harry Potter Alliance to promote a variety of social justice causes.

"If the Harry Potter series has taught us anything, it’s that back to Hogwarts means back to action," the campaign's website reads. "So hop on the Hogwarts Express — it’s time we make sure that everyone can get on board."