This dad's 'rules' for dating his daughters are perfect for 2017. 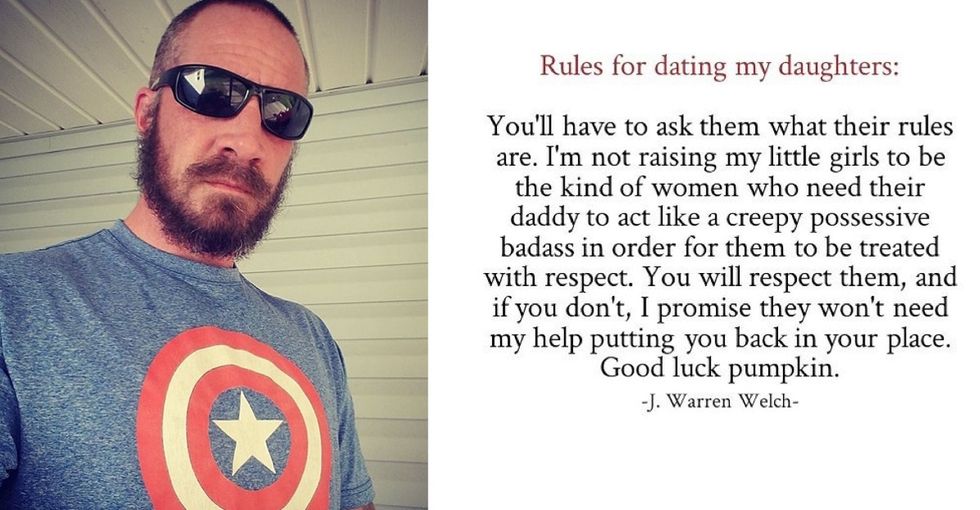 It's 2017: The stereotypical shotgun-wielding, overprotective dad type is officially out of date.

As a dad, it's hard to think about the day when your daughters start dating. To think of ill-intentioned boys or girls sniffing around, manipulating their emotions and leaving a broken heart in their wake is hard to swallow.

We're bound to be protective of our daughters because the fact is the world can be a more dangerous place for women than it is for men.

But it's also high-time we realized that they can make their own decisions and make their own rules for what they do with their bodies, and we can trust them to be the bosses and gatekeepers of their own lives.

Dad and poet Jeff Welch put it pretty perfectly when he shared his very simple "rules" for dating his daughters.

Are you ready to hear his brilliant rules? Because it's basically just one, and here it is:

They make the rules.

"I ain't raisin' no princesses," he wrote in the post.

I ain't raisin' no princesses.

The father of three girls (and stepdad to two more) elaborated:

"You'll have to ask them what their rules are. I'm not raising my little girls to be the kind of women who need their daddy to act like a creepy possessive badass in order for them to be treated with respect. You will respect them, and if you don't, I promise they won't need my help putting you back in your place. Good luck pumpkin."

Welch's post went viral, with support and admiration from other parents pouring in from across the globe.

Welch says the overwhelmingly positive reaction to his post shows that maybe, just maybe, this antiquated mindset is beginning to fade away with a new generation of parents at the helm.

"I think [the stereotype of the overly protective dad] really is rooted in a genuine protective instinct that any good father SHOULD feel toward their daughters," he writes in an email. "But it can also plant a mindset in our daughters that they need a man's stamp of approval on major decisions they have to make."

So dads — put down the shotguns. Wipe away the aggressive scowl directed toward every potential date. Ease up on the vice-grip handshakes.

Take it from Welch: There are much better ways to raise strong and empowered women.