This bold girl is ushering in a new wave of media representation for Latinos.

Seeing ourselves represented in the media in a fun and fearless way is a wonderful thing for the Latino community. 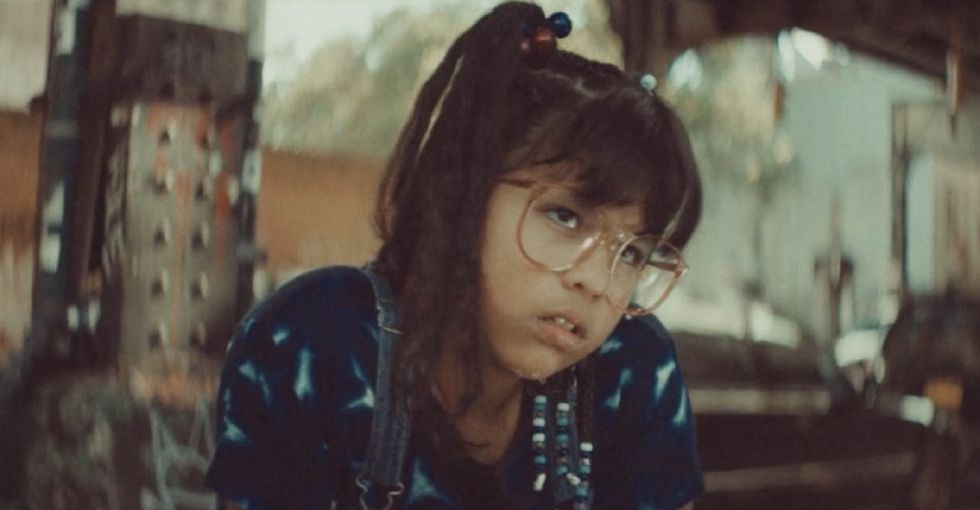 The second I saw the spark of self-confidence in the little girl's eyes, I knew Bomba Estéreo's music video "Soy Yo" would be different.

You may have heard of Bomba Estéreo — they're a Colombian band that's seen some heightened success recently. Will Smith teamed up with them on the song "Fiesta," and "Soy Yo" plays in a badass recent Target commercial starring Rita Moreno. The Spanish phrase "bomba estéreo" is a term used in Colombia for a really cool, awesome, badass party ... and I can definitely imagine being at one of those, dancing the night away with "Soy Yo" playing on repeat.

The song's title means "I'm Me" in Spanish, and the video proudly showcases a curious and modern little girl roaming a neighborhood. Throughout the song, she comes upon a series of things that could be considered obstacles to anyone who may not be sure of themselves, but she knocks each one down with pure gold bravado.

This little girl may very well be my spirit animal.

I was so transfixed by the protagonist's delightfully confident swagger that after I watched it, I immediately called my sister to have her watch too.

We both instantly fell in love with the pint-sized star and agreed the little girl has a striking resemblance to my sister when she was that age — actions and all, which made it that much cooler. Watch the video for yourself:

So, yeah, this is a well-made music video, and the song is pretty catchy. But for the Latino community, this video is a really big deal even beyond all that.

Why? Because I almost never saw myself represented in the media when I was a kid.

I didn't have a Latina version of a Winnie Cooper character from "The Wonder Years" on television when I was growing up. Sure, we had the hilarious La Chilindrina, a bonafide crybaby and drama queen, from the hugely popular television show "El Chavo del Ocho," which I adore. But she wasn't exactly the picture of self-confidence. And she also doesn't depict what I consider an accurate representation of little girls in the Latino community.

So this video matters A LOT. Young Latino girls now will have someone like this video's protagonist on screen, and they can relate to her. She looks like them, and she's fearless and bold in a music video from a band that's getting a big break in America. That's amazing. Where have girls like her on TV been all my life?

The video opens with our heroine spinning around in her salon chair.

She absolutely loves the way she looks — no fancy curls or updo needed. This scene screams, "I love myself!" It's an awesome display of self-confidence.

Sure, her look may not fit the stereotypical mold of what some people consider attractive, but she loves it and that's all that matters. Get it, girl! If all of us could look in the mirror and be as confident as she is, that would be a wonderful thing.

Then comes a face-off with a pair of girls, where our protagonist unapologetically toot-toots their negativity away.

Just when we expect our little starlet to feel intimidated, powerless, or embarrassed over the sneers of her peers, like in most tween movies and old after-school specials, she busts out her flute and plays with unapologetic originality.

This scene is proof that you don't always have to fight when you feel threatened or intimidated: You can diffuse the situation by just being your goofy self too.

The music video also tackles fearlessness in the most delightful way possible when our main character jumps into a basketball game.

Sure, she may not have the skills of the others playing in the pickup basketball game ... but that's not going to stop her from trying anyway. She doesn't need the b-ball skills to impress. She's got the confidence and the courage to just go for it, and that speaks volumes.

On her last stop, the girl encounters a trio of breakdancing boys and adds her own funky fresh moves.

OK, so she doesn't dance exactly like them, but she has her own impressive moves that she's happy to bust out, and they showcase her unshakeable confidence in herself and her originality. Yassss! Here's a tiny sample:

Or even this classic move...

Watching a young Latina girl walk around like the world is her oyster is mind-blowingly awesome.

This video makes a powerful statement for the next generation of girls about what they can do. It's a massive cultural shift. Can I get a heck yeah for this awesome representation of pride and self-confidence for Latina girls everywhere?

Director Torben Kjelstrup says his inspiration for the video came from an old photo of his girlfriend from the '90s. "She was looking so overly confident that she totally pulled it off, and I felt it resonated perfectly with the theme of 'Soy Yo.'" He said Sarai, the lead actress in the video, took it to the next level with her performance. Hell yes, she did.

This video makes me feel elated (and not just because I can't stop dancing while listening to the song). It makes me excited about the new direction Latino representation is taking that includes more self-awareness, more self-worth, and a great desire to show it all off.