There are no easy answers when it comes to a war that divided the country, but we can try. 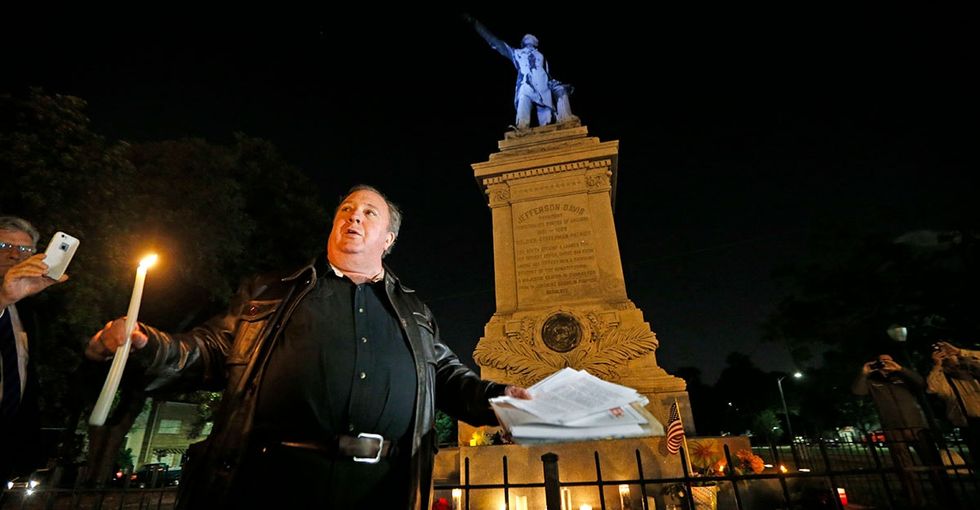 In the early hours of April 24, 2017, the first of four Confederate monuments in New Orleans was dismantled — to the delight of some and anger of others.

In 2015, the New Orleans City Council voted 6-1 to remove four of the city's Confederate monuments. Just months after Dylann Roof murdered nine people inside a Charleston, South Carolina, church, many in the South began the process of reconsidering what place Confederate flags and monuments have in modern society.

The first monument taken down was the Liberty Place monument — a statue honoring the Crescent City White League's attempt to overthrow New Orleans' government after the Civil War.

From 1934 until 1981, when the inscription was covered up, the statue shared an endorsement of white supremacy:

"McEnery and Penn having been elected governor and lieutenant-governor by the white people were duly installed by this overthrow of carpetbag government, ousting the usurpers, Governor Kellogg (white) and Lieutenant-Governor Antoine (colored). United States troops took over the state government and reinstated the usurpers but the national election of November 1876 recognized white supremacy in the South and gave us our state."

That monument being taken down in New Orleans? This is what it says on it. Context for when you see "traditionalist… https://t.co/q9hBGC1ouY
— Helen Kennedy (@Helen Kennedy)1493046395.0

Landrieu on Liberty Place monument: The monument was put up to celebrate the murder of police officers by white supremacists.
— WWL-TV (@WWL-TV)1493039481.0

You'd think that dismantling a literal monument to white supremacy would be something most people could agree on. You'd be wrong.

Workers taking down the monument faced threats of violence from those intent on preserving it and had to sneak in to dismantle it in the dead of night, guarded by snipers and wearing bulletproof vests and military-style helmets.

A common argument in favor of protecting the Confederate-era monuments is that removing them would be a form of "erasing history."

Corey Stewart, a Republican running for governor of Virginia, even went so far as to say that removing the monument meant that "ISIS has won."

It appears ISIS has won. They are tearing down historical monuments in New Orleans now too. It must end. Despicable! https://t.co/hrO0cLozos
— Corey Stewart (@Corey Stewart)1493042033.0

And others made a bizarre argument about the removal of the monument being about "Marxism."

But taking down these monuments doesn't mean forgetting the Confederacy's role in American history.

Nobody is going to forget the Confederacy anytime soon — especially not those whose ancestors were harmed by it — and you'd be hard-pressed to find someone who argues that artifacts from the Civil War shouldn't be displayed in proper context within museums.

Yes, some monuments simply mark a historical event or person; but others outright celebrate them, and it can be a very thin line between the two. Perhaps there's a better way to remember significant moments in history without celebrating those who fought to preserve the institution of slavery.

In 2016, The Atlantic reported that there are around 1,500 Confederate monuments around the U.S. — many of these monuments located in regions of the country that weren't even a part of the Confederacy. Statues of Robert E. Lee, Jefferson Davis, and P.G.T. Beauregard pepper the country.

On Twitter, people chimed in with some suggestions for what we can honor in place of these monuments without forgetting or erasing our Civil War history.

For every Confederate monument we should commission 5 statues of the black people that wanted said person gone
— Dad (@Dad)1493034548.0

History is what happens, and it should never, ever be forgotten. Monuments come after, and they don't always get it right.

Remembering the Civil War doesn't mean we must pay tribute to those who took arms against the state, and it certainly doesn't mean we must (or even should) preserve literal monuments to white supremacy and racism — especially in a city with a majority people-of-color population.

The real question here — which is sure to bring out strong emotions on all sides of this issue — is about what we build next. Do we take a critical look at our past to inform ourselves how to live better today, or do we devote time and energy and emotion to uncritical protection of vanity monuments that only divide us further?

After battling the snow, Rex gets a third chance to find the perfect home

Meet Rex -- a sweet, beautiful, collie mix. Originally adopted from a Tyler, Texas animal shelter at just 12-weeks-old, Rex's family could no longer keep him and returned him to the shelter when he was only four.

Last week in the wake of the horrible storms in Texas, generators gave out and shelters lost power. The pipes burst and water was cut off. The lack of water, power, and other resources created a dire situation with many pets at risk of euthanasia in shelters across Texas.