These just-unearthed ancient tablets show how little has changed in 2,000 years. 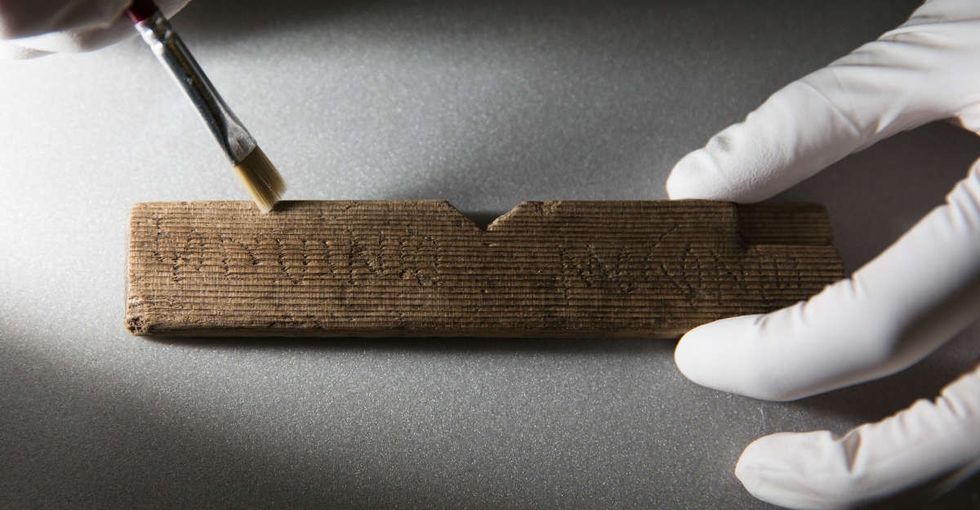 The most fascinating part of the 405 ancient Roman tablets recently unearthed in London is what's written on them.

They're not filled with abstract philosophy. Or enigmatic paeans to long-forgotten gods. Or even soul-deep wisdom of the ages.

Archeologist Luisa Duarte displays one of the tablets. Photo by Daniel Leal-Olivas/Getty Images.

They're filled with things like business advice, IOUs, and even a schoolchild's writing practice.

Oh yeah, and they include the oldest-ever written reference to the city of London.

The tablets were found almost by accident during an archeological survey to prepare for the construction of Bloomberg's new headquarters in Europe.

"I’ve been digging around in London for years and never quite imagined that in the late 1st century, there was a community of people who are very much like us," Sophie Jackson, the manager of the dig project, told New Scientist.

The reference to London was made sometime between 65 and 80 A.D., 40 years earlier than the city's previously known first written mention.

The inscription reads: "In London, to Mongontius" and is believed to be the beginning of a letter written by someone in the upstart city to an acquaintance elsewhere in the empire.

"...because they are boasting through the whole market that you have lent them money. Therefore, I ask you in your own interest to not appear shabby. You will not thus favour your own affairs..."

In which someone is basically telling their buddy to dress like the big shot they've made themselves out to be.

"...I ask you by bread and salt that you send as soon as possible the 26 denarii in victoiriati and the 10 denarii of Paterio..."

In which someone invokes the time-honored tradition of hitting up a rich friend for money.

The tablets are incredible evidence that people 2,000 years ago lived in ways we can recognize today.

Two centuries ago, people weren't all sitting around writing impenetrable political treatises, fighting mummies, or speaking in obtuse, poetic dialects (though some, thankfully, did).

Like people today, they started businesses, they owed people money — and tried to get out of paying them back — and their children struggled to learn to read.

In that sense, the tablets are kind of soul-deep wisdom of the ages.

But through it all, we've always been human.