These guys just learned what it feels like to be a woman in Congress.

The inequality is real, and it's time we do something about it. 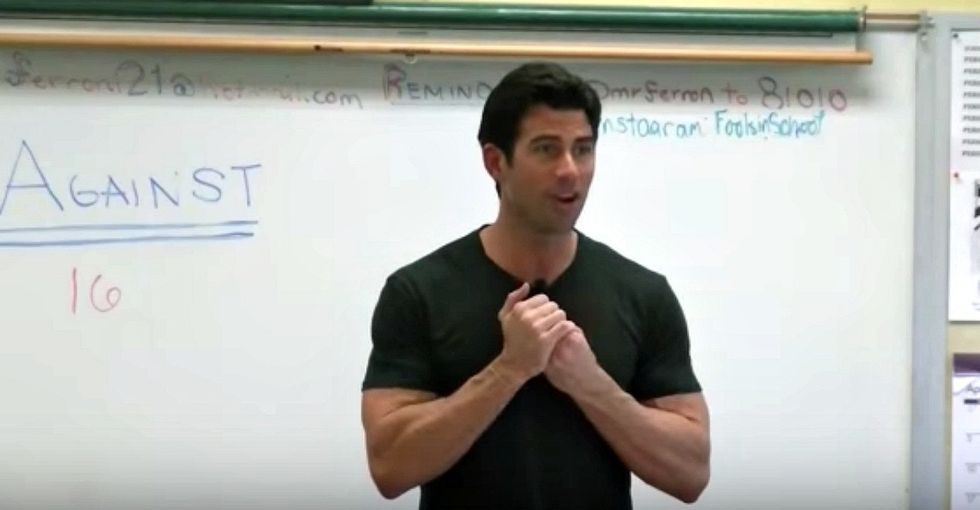 News flash: There's a whole lot more men than women in Congress. A disproportionate amount, you might say.

Ooo! Ooo! There's one! It's like a veritable "Where's Waldo?" Photo by Molly Riley/Getty Images.

High school teacher Nicholas Ferroni wanted to explore what it means to be disproportionately represented in Congress by flipping that 80/20 dichotomy, using his students as test subjects.

Ferroni's been known to do the occasional social experiment, but he says this time — in a video featured by SoulPancake — his students weren't aware they were participating in one; they just thought they were voting on run-of-the-mill school government stuff.

The first question he asked the students: Should girls get a 21% discount on all school-related items? With a voting base that was 80% female, the majority of the students were in support of this. Several of the boys saw the validity in it too, explaining it's not fair that girls tend to spend more on accessories and still earn less than guys do.

But when Ferroni asked the students if girls should get a two-minute head start between classes, things started to get tense.

That's what a face melt looks like. GIF via SoulPancake/YouTube.

There was less overwhelming support for this rule as it seemed blatantly unfair to the guys. But with a 20% minority vote, could the guys sway the vote in their favor? Not a chance.

Ferroni continued having the group vote on proposals that were increasingly biased towards the female students until the guys just about had a fit.

Suddenly the frustration congresswomen (and women in the world in general) feel every day became painfully clear.

"You can't put this approved if there's only girls voting," said one outraged male student in Ferroni's class. He went on to liken the experience to "a boys prison."

All Ferroni's students were floored when he revealed the intent of the experiment.

"It opened the eyes of the boys, but, more importantly, it angered the girls when they actually realized Congress is the complete opposite," Ferroni explained in an e-mail.

When we talk about proportional representation in Congress, it's not about tokenism and it's not about doing it "just because." It's because an overwhelming majority will always vote in its own best interest. If Congress reflected the diversity of the country it represents, it would better able to make decisions that are good for everyone.

Check out Ferroni's experiment in this video by SoulPancake: