There is a movement to paint over the hate-fueled election graffiti, and it's fantastic.

'We have so many people who are devastated and feel hopeless. This is a way for them to do something.' 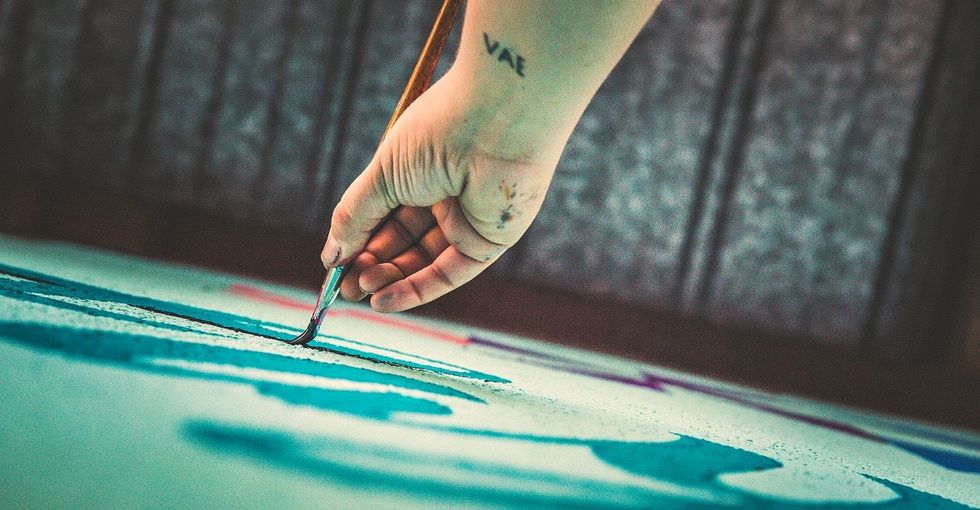 When Olivia Trimble heard that a hate message had been spray-painted on a wall across from her town's public library, she grabbed her paint, jumped in her car, and headed over.

According to Trimble, the hateful message — a sign that read "F**ck N**gers" — had already been reported to the Fayetteville, Arkansas, police but had yet to be covered up.

“I felt moved to take it down," Trimble said. "I didn’t want my kids or any other person to see that hatred in our city.”

But she didn't just take it down...

She covered it up with a message of love.

And Trimble didn't stop there.

When she got home, Trimble wrote a message on social media asking members of her community to let her know of other hateful messages that might appear.

If she could get to them, she'd cover them with uplifting messages in a matter of hours.

Soon after, Trimble began reaching out to other sign-painters, artists, and activists to ask if they would offer similar services in their own neighborhoods. Within a day, she was overwhelmed by a flood of messages from fellow painters — from Chicago to Copenhagen — pledging to do the same.

In the Repaint Hate Facebook group (which has over 3,000 members as of this writing), people can report hateful graffiti that needs covering and share pictures of the messages of love painted over them.

Earlier this week, the owners of Smoke and Barrel Tavern in Fayetteville donated a wall to Trimble, so she could continue spreading positive messages in the face of these hate crimes.

She is still also the on-call painter for any new hate graffiti that might appear in her city, but she believes there can never be too many positive messages, especially during a time where hate crimes are on the rise.

Repaint Hate is far from the only group with the idea to cover up hateful messages with positive ones.

When a church in Maryland was vandalized with “Trump Nation, Whites Only” graffiti, community members got together and hung “Love Wins" posters all around the church. Students at Michigan State covered up a message painted on their school's boulder that read "Kill 'em all" with "Love 'em all." Three days after the election, Laura Molina, together with her husband Robert, covered up the hate-filled graffiti they found on the sidewalk outside the HRC headquarters in New York City:

“We have so many people who are devastated and feel hopeless," said Trimble. "This is a way for them to do something.”

Painting over these hateful messages is just one way people are taking an active stance against the recent uptick in hate crimes in this country.

A movement called "Yes, I'll accompany my neighbor" was started to accompany minorities who feel threatened on their daily commute and is picking up steam nationwide. Community members and students at Baylor University literally stood and walked with student Natasha Nkhama after she was harassed on campus by a racist. The Anti-Defamation League has taken to fighting hate crimes on a legal and governmental level.

There are plenty of little things each and every one of us can do to make a difference. You just have to keep your eyes open, and when you see something you can make better, follow Trimble's lead — get out on the street with whatever tools you need and do something about it.

Of course, you should always report a hate crime to the SPLC and your local police department before taking action. They may also have some helpful advice on the best course of action to take.