The story behind the World's Smallest Park is even more delightful than you'd expect. 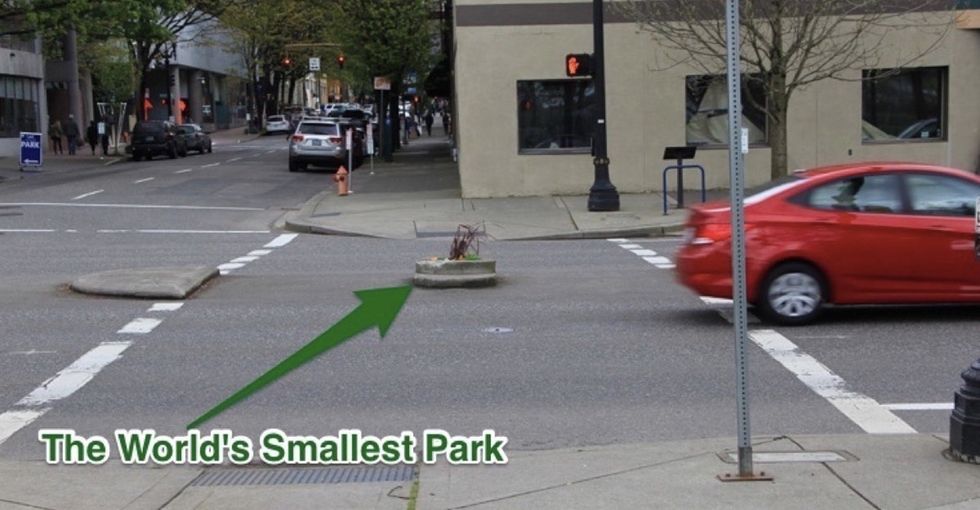 Like any good dreamer, Dick Fagan spent time writing, listening, and staring out his office window, a detail which is important to this story.

More than 70 years ago, from his desk on the second floor at The Oregon Journal, Fagan noticed a small, round concrete traffic median on top of which a traffic signal would be installed. Construction eventually wrapped up on the median, but no light or traffic signal ever went in.

Soon, the bare space grew thick with weeds and neglect.

After watching the space go unattended, Fagan went down to the median himself, cleared the weeds and trash, and planted some flowers.

Mill Ends Park from above. Photo by Don Ryan/AP.

He called it Mill Ends Park, after his popular newspaper column of the same name ("mill ends" are the odd, rough pieces of lumber often left over and discarded at mills).

On St. Patrick's Day in 1948, Fagan held a dedication ceremony and declared Mill Ends to be the World's Smallest Park.

Fagan, a proud Irishman, used his column to describe the "goings-on" at the tiny park, sharing whimsical tales of an active leprechaun colony led by head leprechaun, Patrick O'Toole.

He continued writing about the park and its fantastical inhabitants until his death in 1969. Shortly before he died, the city held a rededication ceremony for Mill Ends, complete with city council members, a ribbon cutting, an Irish pipe band, and an Irish dance group.

A local group gifted Fagan a permanent cement enclosure for the park, complete with stadium turf and a handmade leprechaun statue. Fagan was too ill to attend the ceremony and passed away just a few weeks later.

Mill Ends Park lives on to this day and has even earned international recognition.

Since 1976, Mill Ends has been an official Portland city park.

At 452.16 square inches (about the size of a laundry basket) it holds the Guinness Book of Records title for the world’s smallest park.

Though it was moved briefly for roadwork, Mill Ends Park still sits in the median at the intersection of what is now Naito Parkway and Taylor Street.

The city looks after it, replacing the small tree and plants as needed, just as it would any other public park.

Tourists and locals alike are encouraged to visit.

Just keep an eye out for traffic.

Over the years, the park has seen improvements like a butterfly swimming pool, a tiny ferris wheel delivered via full-size crane, and even dinosaurs.

Last stop of the trip. Someone filled this tiny park with dinosaurs!

After all these years, it's still a great spot for the occasional picnic...

The List having a morning laugh and a delicious breakfast in the worlds smallest park in Portland, OR. It was nice having the park to yourself for a change. #MillEndsPark

In 2011, the leprechauns  joined forces with demonstrators and hosted what is likely the smallest Occupy Portland event on record.

What began as Fagan's simple effort to beautify a forgotten space has now become a world-class (albeit odd) landmark.

Yes, it's one of the many things that "keeps Portland weird," but it's also a living tribute to ingenuity and creativity. Never doubt what one dreamer can do with a little potting soil and a lot of imagination.

Allison Wildman crouches low to get a photo. Photo by Don Ryan/AP.