The Soviet Union literally destroyed the Aral Sea. This nation's going to bring it back. 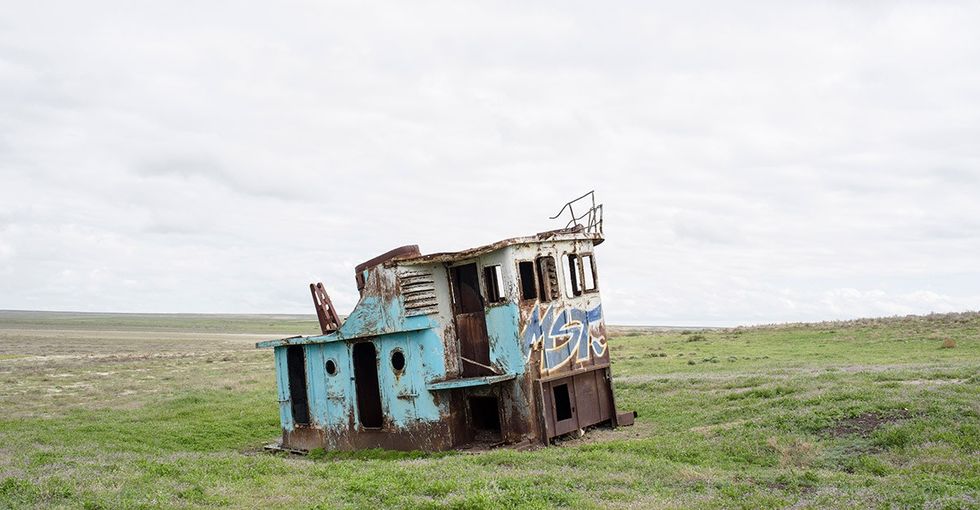 We thought the Aral Sea was dead.

Located between modern-day Kazakhstan and Uzbekistan, the Aral Sea was once one of the world's largest freshwater lakes.

But starting in the 1960s, the Soviet Union began rerouting rivers away from the sea and into giant agricultural projects. Starved of incoming water, the Aral began to evaporate and disappear, leaving behind briny pools and a ghostly, polluted desert.

By 2007, the lake was just one-tenth of its former size. Former United Nations Secretary General Ban Ki-moon called it one of the world's worst environmental disasters.

But now the sea — at least a little part of it — is coming back to life.

In 2005, Kazakhstan built a massive dam, Dike Kokaral, around one of the Aral's few remaining pockets of water, a lake that's come to be known as the North Aral Sea.

Now, rather than disappearing into the vast desert, incoming river water has stayed and pooled. Over time, the water level has risen, and freshwater fish that had been driven off by lower waters and rising salt levels returned.

And with the fish came fishermen.

For two weeks, French photographer Didier Bizet traveled to the North Aral Sea to see how the water's return had affected the region's towns and cities. This is what he saw.

In the morning, fishermen from the town of Tastubek drive out to the (now vastly closer) coast.

A lot of people from the village are fishermen, including 23-year-old Omirserik Ibragimov.

Ibragimov works with his friend Kanat. The fishermen usually work in pairs and use small, rusty boats.

When he's not working, this fisherman stores his boat's engine in his car. Nobody's likely to steal it, but it's too expensive to risk losing. Photo from Didier Bizet.

Outside the North Aral Sea, the vast majority of the former lake is still desert.

Local guide Serik Dyussenbayev says this particular patch of land used to be under about four meters (about 13 feet) of water. The ground, contaminated with Soviet-era pesticides, is dotted with thousands of sea shells.

This ship lies about 30 kilometers from Tastubek. There used to be more, but they were cut up for scrap. Photo from Didier Bizet.

But the fish prove that, at least in the North Aral, the dam is working.

In Tastubek, fish are sorted, washed, and frozen. Photo from Didier Bizet.

Factories in Tastubek and the nearby city of Aralsk sort, clean, and freeze the fish, which are then shipped all over the region, even into Russia and Uzbekistan.

In Aralsk, fish shops have returned.

Decorations at the Rara café hint at how close the water used to be to Aralsk — and maybe how close it could be again.

A second phase of the dam project could raise waters even more, bringing the sea to Aralsk and other former ports again.

The Aral Sea is still one of the world's greatest environmental disasters. We shouldn't ignore that, but recovery is possible.

It's important to understand that the North Aral Sea is only a small part of the former lake and just returning the water won't solve every problem. Any long-lasting recovery could take decades.

The fishermen head home at the end of the day. Photo from Didier Bizet.