The NICU is the last place any parent wants to be. One mom thinks differently.

Even when she didn't know if her four children would live or die, the NICU provided peace for one mom. 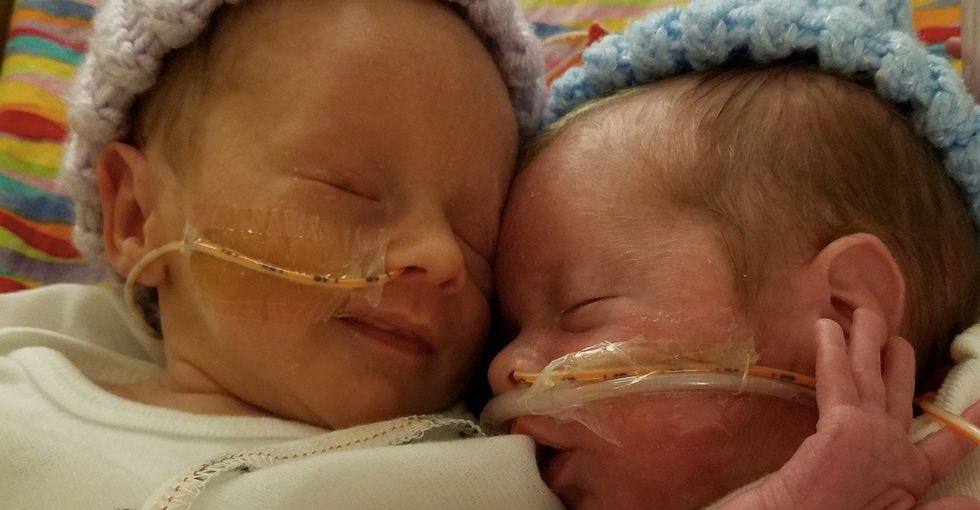 "Are you f**king kidding me?" Those were the first words out of Andrea Boring's mouth in January 2008 when the ultrasound technician informed her that she was going to have twins.

The irony isn't lost on Andrea — because even though her last name is "Boring," her life is anything but.

She developed a rare pregnancy complication known as HELLP syndrome that affects less than 1% of all pregnancies and was rushed to the operating room after learning her liver was dangerously close to rupturing.

In doing so, her twin boys, Hayden and Logan, were delivered via cesarean section after only 28 weeks, and they weighed in at 2 pounds, 6 ounces, and 2 pounds, 5 ounces, respectively.

They spent 71 days in the NICU (Neonatal Intensive Care Unit).

Even though she's smiling, Andrea was pretty nervous during her first NICU experience. Photo from Andrea Boring, used with permission.

Eight years later, Andrea was back at the doctor and heard the same news: She was pregnant with twins. Again.

And, yes, she uttered the same phrase as she did the first time around, only louder.

Under much less stressful circumstances, in March 2016, Michael and Joshua were born after 28 weeks and weighed in at 2 pounds, 10 ounces, and 2 pounds, 11 ounces. These little ones spent 53 days in the NICU.

Michael and Joshua enjoyed a nice embrace in the NICU. Photo from Andrea Boring, used with permission.

So if you're keeping score at home, Andrea and her husband David endured two stints in the NICU with two sets of twin boys. Oh, and they also had a healthy little girl right in the middle.

Real talk: The NICU is not a fun place. But the time spent there can have a silver lining.

Andrea's four boys survived the NICU, but many babies aren't as fortunate. With preterm birth being the greatest contributor to infant death, not all NICU stories have a happy ending.

Even still, the NICU provided Andrea Boring with some much-needed perspective on parenting, and she wants other parents to know the experience doesn't have to be so scary.

With that in mind, here are five positive things she took away from her time in the NICU.

1. Recovery from birth can be a lot easier in the NICU.

While in the NICU, Andrea felt that she had time to recover on her own schedule. Photo from Andrea Boring, used with permission.

Andrea knows what it's like to deliver babies inside the NICU and outside of it. When it comes to recovery, she believes the NICU holds an advantage.

"When I had my babies in the NICU, I was able to let my body recover the way it needed to," Andrea told Upworthy. "It's great to recover while top-notch caregivers are tending to your baby's needs."

2. Spending quality time with the older kids can be much easier.

Andrea treasures the time she spends with her older kids. Photo from Andrea Boring, used with permission.

Pregnancy didn't treat Andrea very well. She suffered from extreme morning sickness and felt tired and irritable most of the time. When her babies were in the NICU, she found happiness in being able to focus on her older children.

"I found that I enjoyed the time I had with my older kids when I wasn't pregnant anymore," Andrea said. "It's no secret that I'm a lot more fun to be around when I'm not uncomfortable."

When you have five kids, having them on a schedule is a big deal.

"In the NICU, the babies are always on a schedule and they come home on a schedule," Andrea said. "As a mom with five kids, I can safely say that is the best thing in the world."

4. If she had questions, they had answers.

Thankfully the NICU is filled with people who can answer the questions scared parents have. Photo from Andrea Boring, used with permission.

Being a new parent comes with a lot of questions. Is the baby latching correctly? Is she eating enough? Should his poop look like this?

Andrea was thankful to have lactation counselors, physical therapists, occupational therapists, and more right at her fingertips to answer all her questions while in the NICU.

"So many people were available to handle my concerns, and that's invaluable to any parent," Andrea said.

Lauren is one of the amazing nurses who made Andrea's stay at the NICU such a positive one. Photo from Andrea Boring, used with permission.

It's impossible not to build powerful bonds with the individuals caring for your children, and Andrea is so thankful for them.

"Throughout our two NICU stays in two different states, I've kept in touch with the nurses who cared for our sons," Andrea said. "They kept my babies alive for months and I will always treasure them because of it."

In the often chaotic world of the NICU, Andrea leaves us with three small pieces of advice.

"Have faith, be open about your feelings, and don't feel that you need to spend every waking moment in the hospital or else you will go crazy," she said. "In my mind, the NICU showed me everything that is good about the world."

Her four boys would agree.