The Navy just named a ship after this gay rights icon. Here's why it matters.

Harvey Milk is known for one historic first. Now it's time for one more. 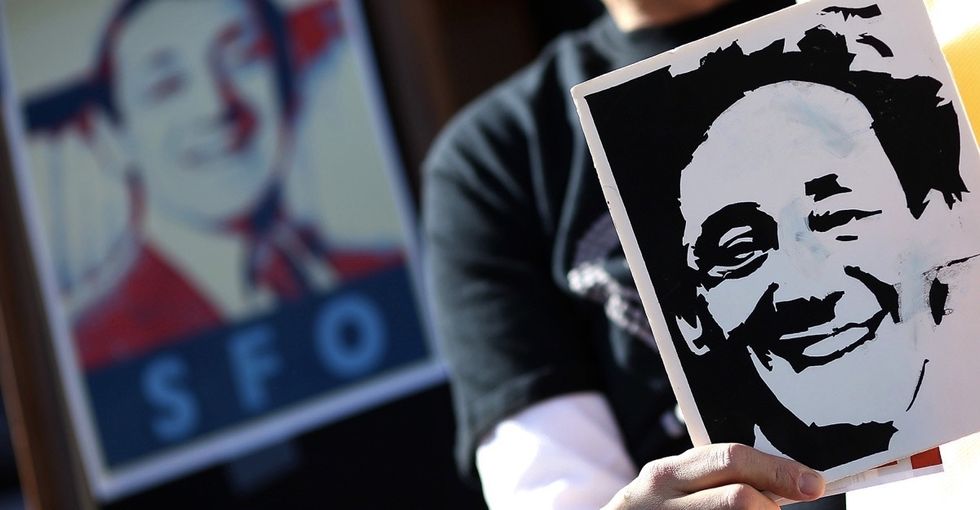 Many people know about Harvey Milk's legacy as a gay rights icon. Less talked about is his history in the Navy.

From 1951 to 1955, Milk served as a diving officer aboard the U.S.S. Kittiwake, a submarine rescue ship. Milk achieved the rank of lieutenant junior grade prior to receiving an honorable discharge.

Following his career in the Navy, Milk devoted the next two decades to activism and public service, becoming the first openly gay man to be elected to public office in the United States. In 1978, he took office as a member of the San Francisco board of supervisors. Sadly, less than a year later, he was shot and killed.

Milk's personal possessions at the grand opening of the Gay, Lesbian, Bisexual and Transgender history museum in 2011 in San Francisco. Photo by Justin Sullivan/Getty Images.

After his assassination in 1978, Milk received some of the country's highest honors, including the Presidential Medal of Freedom.

"His name was Harvey Milk, and he was here to recruit us — all of us — to join a movement and change a nation," said President Obama. "For much of his early life, he had silenced himself. In the prime of his life, he was silenced by the act of another. But in the brief time in which he spoke — and ran and led — his voice stirred the aspirations of millions of people. He would become, after several attempts, one of the first openly gay Americans elected to public office. And his message of hope — hope unashamed, hope unafraid — could not ever be silenced. It was Harvey who said it best: 'You gotta give 'em hope.'"

In 2014, Milk was immortalized in the form of a postage stamp.

And in 2013, supporters pushed to rename one of the terminals of San Francisco's airport after Milk.

Unfortunately, their plan never came to fruition, but the wide support for the plan illustrates the power of Milk's legacy.

Supporters of Harvey Milk during a rally at San Francisco City Hall in 2013. Photo by Justin Sullivan/Getty Images.

In July 2016, the Navy — where Milk began his historic career — announced that it will be naming a ship after him.

During his time in the Navy, Milk had to hide who he was. At the time, gay service members were banned from the military. It wasn't until 2011 that lesbian, gay, and bisexual individuals would be allowed to serve openly. And it wasn't until June 2016 that Secretary of Defense Ash Carter announced that the ban on transgender service members would be lifted.

Milk's name among the engraved names of AIDS victims during a World AIDS Day commemoration event at the National AIDS Memorial Grove in San Francisco. Photo by Justin Sullivan/Getty Images.

Now that all people are allowed to serve their country regardless of sexual orientation or gender identity, it's only fitting that one of the most prominent LGBTQ activists made another historic first: becoming the first gay man to have a naval ship named after him.