Take a look at how the people of Ireland are showing support for marriage equality. 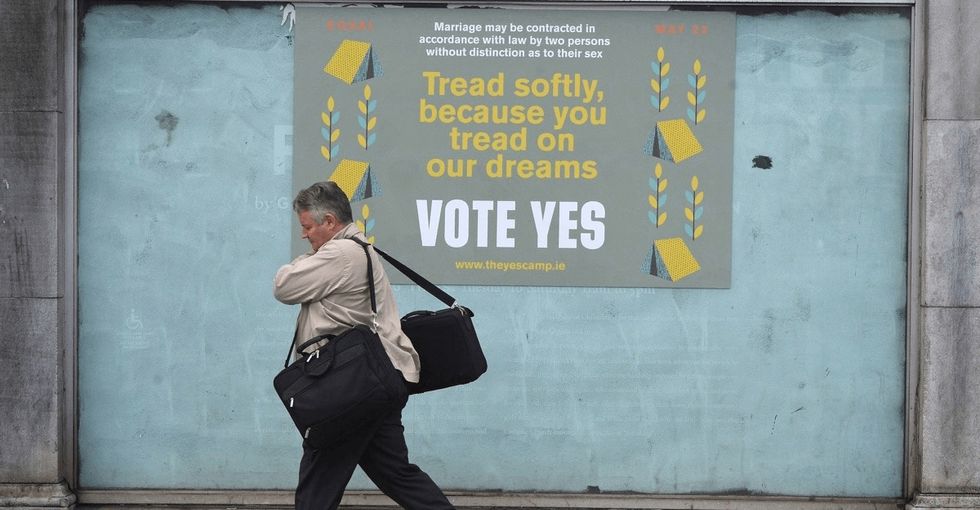 The people of Ireland take to the polls to cast a vote that could improve the lives of countless citizens: a vote on whether or not they will embrace marriage equality.

A 2010 law granted same-sex couples the ability to apply for civil partnerships but still prevented them from being allowed the full equal treatment that comes with marriage. In 2013, the government announced that they would support putting the question of marriage equality up to a vote sometime in the first half of 2015, and that brings us to now.

The vote is a simple "yes" or "no," asking whether or not to add a single sentence to the country's constitution.

That sentence is simply, "Marriage may be contracted in accordance with law by two persons without distinction as to their sex."

Those in favor of marriage equality will vote "yes." Those opposed will vote "no."

LGBT people and their supporters have been out in full force urging the people of Ireland to vote yes, driving the hashtag "#VoteYes" near the top of Twitter's worldwide trend list.

The cause drew support from Ben & Jerry's.

Rock band U2 voiced support for equality in the country they call home.

And best of all, it brought out some incredibly thoughtful, energetic tweets from regular people about to experience something fantastic in their country.

Ruthe later admitted that she ate the "I've" Skittles but it's the thought that counts.

There were lots of pictures of people going to or from the polling place.

Support also came in the form of clothing choices.

John here makes an excellent point. What better way to show how much you appreciate the work of Oscar Wilde than to improve the lives of LGBT people in his home country? I mean, other than tattooing a quote of his on your body like I did.

My absolute favorite, however, is this post by Kevin Beirne. His mom made a few, let's say, changes to his room.

Came #hometovote all the way from London and found my mum had made some subtle changes to my room for me #VoteYes pic.twitter.com/BOdxqXhJoN
— Kevin Beirne (@KevBeirne) May 21, 2015

No matter who you are or where you live, you can appreciate how powerful this moment is in history.

Take, for example, the story of William and Kevin. The two have been together for nearly 10 years. They recently got engaged and live in Savannah, Georgia. For them, there's hope that the U.S. will support marriage equality with the upcoming Supreme Court decision.

They look at Ireland's situation with hope for their own future.

While it's unfortunate that whether or not people have the same rights is being decided by a vote, it's cool to see how enthusiastic some people are.