She was once known as 'the world's greatest athlete.' After last night, she's so much more.

"It's not just about me, it's about all of us accepting one another. We are all different. That's not a bad thing, that's a good thing. And while it may not be easy to get past the things you always don't understand, I want to prove that it is absolutely possible if we only do it together." 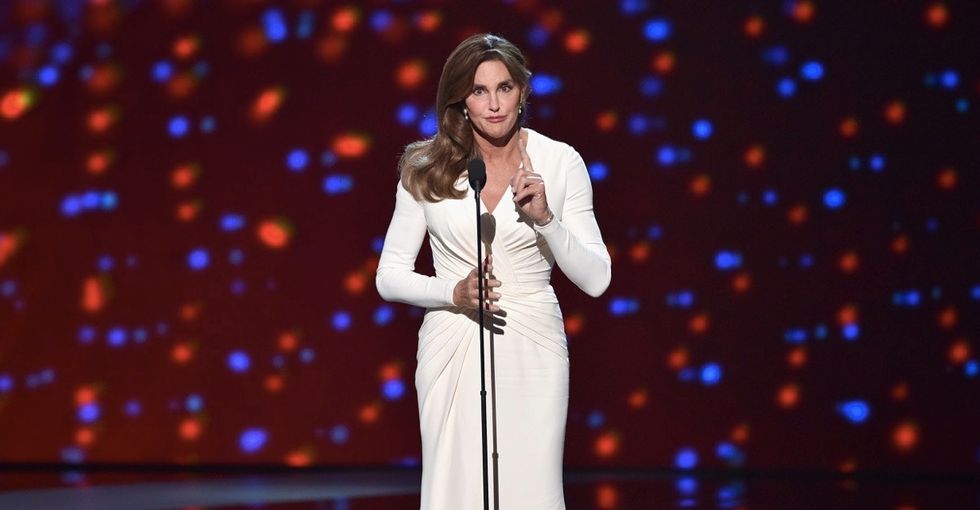 It's only been a few months since Caitlyn Jenner came out as transgender.

During her April 24, 2015, interview with Diane Sawyer, Jenner confirmed what tabloids have (often insensitively and offensively) speculated about for years: that she's a woman.

Since then, she's landed on the cover of Vanity Fair, has a reality show premiering this July, and was honored during the 2015 ESPYs with the Arthur Ashe Courage Award.

But it's been a long time since Jenner has been in the spotlight for her athletics.

The ESPYs are, after all, a sports awards show. While a whole new generation knows Jenner only for her family's reality show, to others she is something else: a symbol of American masculinity and heroism.

In 1976, Jenner took home the gold medal in the men's decathlon at the Summer Olympics in Montreal. As presenter Abby Wambach and a pre-awards ESPY video illustrated, she came along at a time when America needed a role model.

But in doing that, she inadvertently found herself constrained to the expectations that the world held for "Bruce Jenner," making it that much harder for her to break free.

Caitlyn Jenner received the gold medal for her victory in the 1976 men's decathlon. Photo by AFP/Getty Images.

During a powerful 10-minute acceptance speech at the ESPYs, Jenner stood in that sports spotlight once again.

But this time, it looked a lot different.

Jenner's speech included the standard thanks to family and friends, along with some self-deprecating jokes. But the most striking part of her speech was unrelated to her personal story and instead focused on issues that affect low-income trans people and trans women of color.

"Just last month, the body of 17-year-old Mercedes Williamson, a transgender young woman of color, was found in a field in Mississippi stabbed to death. I also want to tell you about Sam Taub, a 15-year-old transgender young man from Bloomfield, Michigan. In early April, Sam took his own life. Now, Sam's story haunts me in particular because his death came just a few days before ABC aired my interview with Diane Sawyer. Every time something like this happens, people wonder, 'Could it have been different, if spotlighting this issue with more attention could have changed the way things happen?' We'll never know.

If there is one thing I do know about my life, it is the power of the spotlight. Sometimes it gets overwhelming, but with attention comes responsibility. As a group, as athletes, how you conduct your lives, what you say, what you do, is absorbed and observed by millions of people, especially young people. I know I'm clear with my responsibility going forward, to tell my story the right way — for me, to keep learning, to do whatever I can to reshape the landscape of how trans issues are viewed, how trans people are treated. And then more broadly to promote a very simple idea: accepting people for who they are. Accepting people's differences."

Jenner seems to understand the immense power she has to drive the conversation about trans people forward, which is important. As she says: "With attention comes responsibility."

And she seems determined to use the massive attention she commands to refocus our attention on the less glamorous topics of trans culture, like violence against trans women of color, homelessness, healthcare, and employment discrimination.

"My plea to you tonight is to join me in making this one of your issues as well. How do we start? We start with education."

Earlier this year, I wrote an editorial for Slate reflecting on the media's seeming disinterest in reporting stories about trans women of color who face unspeakable violence at alarming rates. If Jenner stays true to her goal, she has the power to turn that tide.

"My plea to you tonight is to join me in making this one of your issues as well," she said. "How do we start? We start with education. I was fortunate enough to meet Arthur Ashe a few times, and I know how important education was to him. Learn as much as you can about another person to understand them better."

Jenner's speech was a call for people to try to understand one another and to treat each other with respect.

If you had the misfortune of following the #ESPYs hashtag on Twitter during the broadcast, you probably saw this problem playing out in front of you. Many people don't see trans people as human beings worthy of even the most basic understanding.

What these people may or may not realize is that when you call someone a "freak" for being transgender, that comment applies to all transgender people. To Caitlyn Jenner, to Laverne Cox, to Jazz Jennings, to Chaz Bono, and even to me.

And that's why Jenner's message is so very important.

You can watch Jenner's speech below (and there's a transcript underneath that).

"If you want to call me names, make jokes, doubt my intentions, go ahead, because the reality is, I can take it," she says at one point during the speech. "But for the thousands of kids out there coming to terms with being true to who they are, they shouldn't have to take it."