She was moments from being swept away by a flood, when 3 strangers stepped in.

Our weather may be getting stronger, but that doesn't mean we're getting weaker. 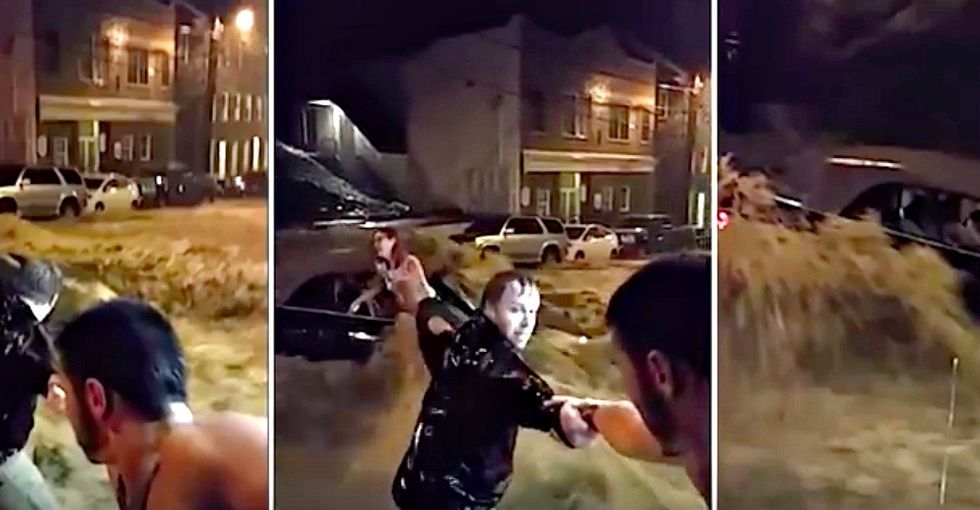 Over the weekend, Maryland was hit by a historically epic flood. Ellicott City saw over six inches of rain in under two hours.

The flash floods tore into buildings and turned the city's streets into rivers, putting anyone stuck in a car in a dire situation.

Jamie Knight was one such driver, who was pulled from her car by a few brave locals acting quickly to form a human chain.

Jason Barnes, a local toy store owner, had just lost all his merchandise in the flood when he decided to risk his own life for a complete stranger. Barnes' stepfather, Chris Penning, told WBAL-TV that owning a toy store had been his stepson's dream 10 years in the making, second only to writing comics about superheroes.

In the face of all his efforts being washed away, however, Barnes became a real-life superhero. He didn't think twice as he plunged into the raging flood waters to save Knight, who had gotten locked in her car as it was being carried away.

Barnes heading out into the flood waters. GIFs via Ark News/YouTube.

The whole ordeal was caught on camera, and the resulting video is pretty incredible. At one point during the rescue, Barnes lost his footing and almost got swept away in the raging floodwaters.

Thanks to teamwork and gumption, the two other men anchoring him to the building got him back on his feet and the trio managed to get Knight out through her car window and onto slightly dryer land.

It's inspiring to see people banding together to save a life, especially in the face of a natural disaster so extreme it only happens once in 1,000 years.

There really are heroes everywhere. And while this incredible rescue is worth celebrating, it's important to remember these dangerous weather situations are happening more and more often as a result of our changing climate.

As such, it's time we use this heroic nature so many of us possess, pool our collective efforts, and pull our planet back from the proverbial precipice.

If these three men were strong enough to save one life from flood-force currents, then surely the rest of us banding together have enough power to turn things around on a global scale too.

Watch the entire awesome rescue below: