Note on woman's apartment door about her howling old pug is a heartwarming reminder to treat animals with kindness. 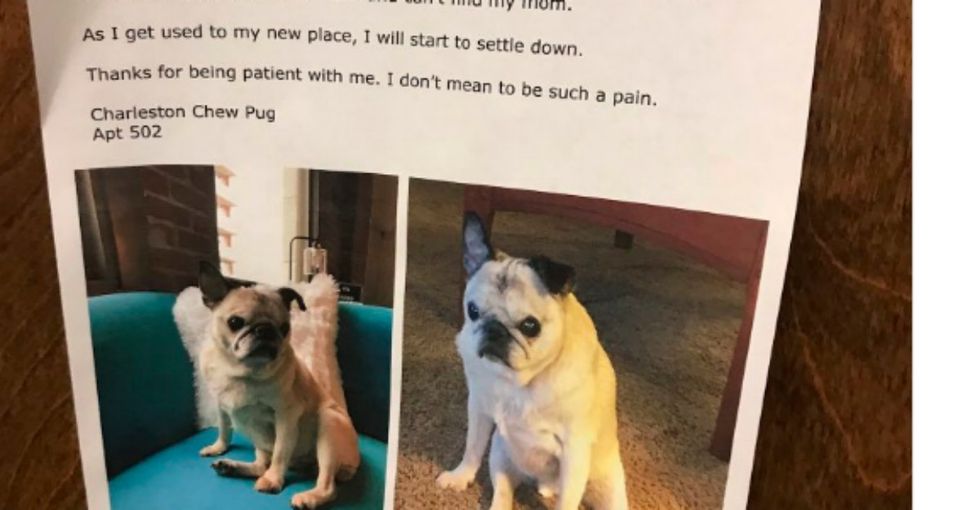 Please stop what you're doing and say hi to Charleston Chew.

He's an adorable old pug from Pennsylvania who's recently won over the internet's heart.

And he'll likely win over yours, too.

All photos courtesy of Sharla Wilson, used with permission.

(According to his human, Charleston goes by about a dozen other names — including Muffin Toes, Puffins, Chi Chi, and Butters. But for the sake of simplicity, let's stick with Charleston.)

Charleston and his owner, Sharla Wilson, recently moved into a new home in Pittsburgh.

But Charleston's been having some real issues with the change.

You see, the new apartment — with its foreign floor plan and unusual surroundings — has been stressful for 11-year-old creature of habit Charleston.

So he's been a bit louder than usual throughout the adjustment period.

Concerned her new neighbors may be irked by Charleston's stress-induced howls, Wilson taped a message to her front door.

"Hello, Neighbors!" the note began. "My name is Charleston Chew and I'm very sorry for my howling."

"I'm an old man now, with cataracts, and sometimes I get real scared because I can't see where I am and can't find my mom. As I get used to my new place, I will start to settle down.

Thanks for being patient with me. I don't mean to be such a pain.

"It's a quiet building and I just didn't want anyone losing sleep or getting upset over his challenges to adjusting," Wilson explains in an email to Upworthy. "This isn't something he just does when I'm away at work. If I'm in another room or in the shower, he'll howl for me if he wakes up and I'm not by his side."

She's not kidding. Here's a cute video of Charleston howling ... at a dandelion.

Well, you asked for it. He smelled a dandelion he couldn't locate and howls galore ensued... pic.twitter.com/8ACenw95G1
— Sharla (@Charlestons_Mom) May 2, 2018

One of Charleston's new neighbors, Megan Jones, spotted the note on Wilson's door and shared a pic of it on Twitter. "You howl all you want Charleston, honey," she wrote.

Since Jones shared it on April 30, nearly half a million people have liked the image, and over 120,000 have retweeted it (at the time of this writing).

The replies to Jones' tweet were delightful as well. Many people were losing it over how adorable Charleston is, and many fellow pet owners shared pics of their own four-legged family members.

"What an awesome mom!" one user chimed in. "Letting the new neighbors know what's going on in such an adorable way!"

Charleston's viral fame even made its way back to Wilson and Jones' landlord!

The story is super sweet all on its own — but it gets even sweeter when you learn how much Charleston has meant to Wilson over the years.

Charleston was given to Wilson when he was just 5 weeks old. He weighed less than 3 pounds and wobbled more than he actually walked.

"I'm a big proponent of adoption and wasn't in the market for a dog," Wilson said. "That being said, as soon as I saw his tiny little face, he had my heart."

The little pup has helped Wilson through more than he'll ever know.

"Charleston has been my constant through some of the biggest struggles and obstacles I've faced," Wilson says. "He's been a steadfast source of laughter and joy. He has been a driving force of renewal and hope during my darkest days. He is the embodiment of the purest form of unconditional love this world has to offer."

Maybe he's not the fiercest guard dog — "My apartment was once broken into and I guarantee you [Charleston] offered the intruder a beer and helped him carry the stolen goods to the car," Wilson jokes — but he's a kind-hearted keeper nonetheless.

Charleston's health has been declining, though.

And as many pet owners know all too well, it's a tough experience for Wilson.

Among other ailments, Charleston has diabetes, which keeps him on a very strict diet. Wilson said she can spend over $300 a month on items like insulin, prescription food, lotions, and pee pads: "I stretch myself to try and give him the best life after all that he's given me."

"It's difficult not to feel sorrow from time to time at the idea of losing my sweet boy," she says.

Fortunately, the love-struck internet wanted to help Charleston out.

Wilson confirms that PetSmart is letting Charleston and Wilson go on a shopping spree, free of charge. A company called WyzeCam is providing camera so that Wilson can keep tabs on Charleston when she's away from the apartment. And 1-800-PetMeds is sending a goodie basket filled with calming tabs, an activity monitor, and more.

Wilson has had "tears in [her] eyes" from all the love sent Charleston's way. She's "at a loss, shocked by it," she says. "To be able to give him a bit more and get some things that were beyond my means is just incredible."

But beyond any tangible items, Wilson is most touched by the fact that strangers near and far have been able to get to know the Charleston she's adored from the start.

"This outpouring of love has been the most comforting experience," she says. "I see Charleston as this unique and wonderful little guy, and to feel so many people experiencing that with me has been inconceivably fulfilling. His big heart has touched people and it's beautiful to feel that I'm not alone in my sentiment."

"He and I are a tag team of weirdos," Wilson concludes. "And I wouldn't have it any other way."

This article was originally publisted on May 5, 2018.