Scientists on 3 continents now have evidence: Some chimps have entered the Stone Age.

They're not as far behind us as we thought. 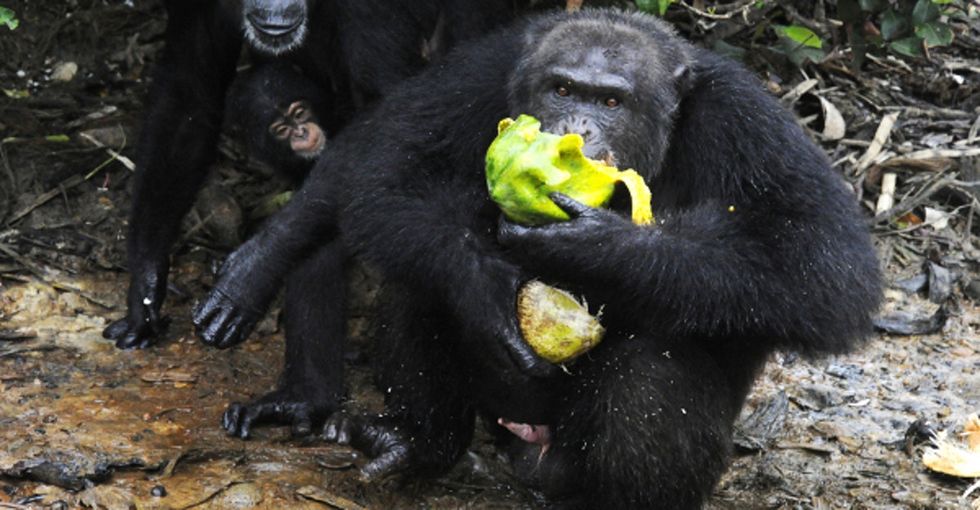 Chimpanzees may be even smarter than we thought they were.

According to a fascinating report from Collin Barras of the BBC, archeologists in Africa, South America and Southeast Asia, have been digging up crude stone tools that date back thousands of years — tools that were fashioned by non-human primates.

Which means something kind of extraordinary (emphasis mine):

"The tools are crude. A chimpanzee or monkey stone hammer is hardly a work of art to rival the beauty of an ancient human hand axe. But that's not the point. These primates have developed a culture that makes routine use of a stone-based technology. That means they have entered the Stone Age."

That's right: We now how pretty solid evidence to suggest that at least some chimps are now firmly in the Stone Age.

For reference, here are a few of the things humans did during the Stone Age:

And then learned to tiptoe away slowly when it got ... a little out of hand. Photo by Cameron Strandberg/Flickr.

We made this from a wolf. Photo by kitty.green66/Flickr.

And selling it at our craft stores in Mendocino. Photo by Nambassa Trust and Peter Terry/Wikimedia Commons.

And while Chimpanzees aren't close to doing any of those things...

At least as far as we know.

Though, honestly, what would you do if you saw this? I don't even know. Photo via Thinkstock.

It's possible these creatures are a lot more like us than most of us give them credit for. And who knows where they might be in the next few thousand years?

...it might be time to reassess how we treat our primate cousins.

Many countries like New Zealand and the U.K. have banned experiments on chimpanzees and other apes, and some others, like Spain, have gone as far as to grant them limited human rights.

Here in the U.S. we haven't gotten quite so far, but calls for change are growing. A lawsuit pending in New York courts alleges that chimpanzees deserve full personhood and the protections that accompany it.

Even if we're not willing to go quite that far just yet, the more empathy and kindness we can extend to chimps and other apes, the better.

Otherwise, we might be in for a rude awakening sooner than we think.

GIF from "Planet of the Apes" by Twentieth Century Fox/Via Tech Noir.