Sally Ride was the first American woman in space. Google just honored her in a really cool way.

Ride was a true pioneer in space travel, breaking down so many barriers in the process. 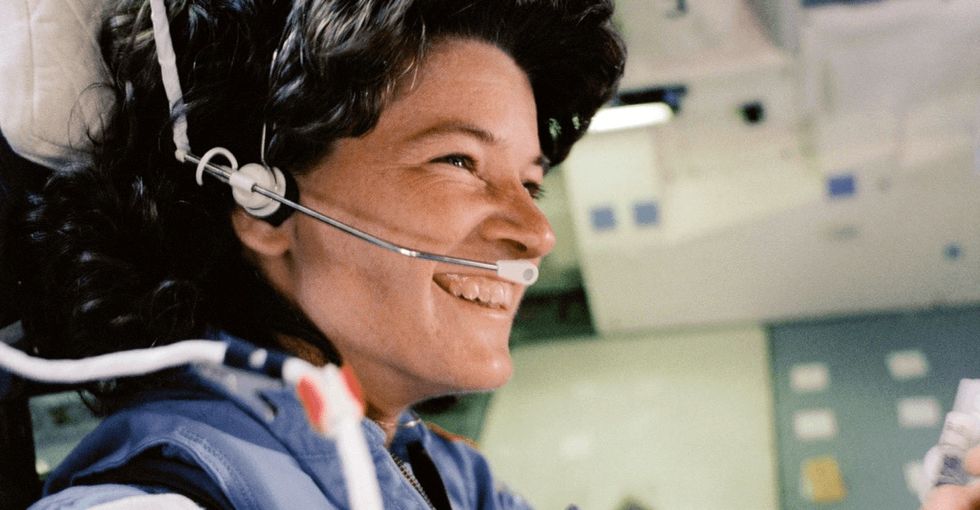 Sally Ride was the first American woman to travel to space.

Born on May 26, 1951, Sally Ride is best known for being the first American woman — and third woman overall — to travel to space. Since Ride's June 1983 flight, dozens of other American women have completed missions for NASA. In total, more than 50 women have ventured into space.

She died in 2012 at the age of 61 after being diagnosed with pancreatic cancer.

Google honored her by putting together a series of four Sally Ride-themed doodles in honor of what would have been her 64th birthday.

Ride's most impressive legacy, aside from her space flight, may very well be inspiring kids of all races and genders to enter science, technology, engineering, and math (STEM) fields.

"As the first American woman in space, Sally Ride — who would have been 64 today —captured the nation's imagination as a symbol of the ability of women to break barriers. But her historic flight represented just one aspect of a remarkable and multifaceted life. She was also a physicist, a science writer, and an inspirational advocate for keeping kids excited about science as they go through school. ... In 2001, Sally and I and three friends started Sally Ride Science to create programs and publications that bring science to life and show young people that STEM is fascinating, creative, and fun. Since then, we've trained thousands of teachers on how to spark and sustain interest in STEM and reached millions of students with our books and programs." — Tam O'Shaughnessy

Ride believed that girls were the key to the future and that society misses out when it clings to gender expectations.

Many people took to Twitter to remember Ride's accomplishments, including a number of fellow astronauts.

Remembering former colleague #SallyRide on her birthday. 1st American woman to fly into space. You inspired many. pic.twitter.com/WZEphK24vV
— Scott Kelly (@StationCDRKelly) May 26, 2015

Happy Birthday, Sally Ride! @GoogleDoodles A pioneer and role model to generations of us. https://t.co/znpnYASurg pic.twitter.com/WSjbE0YpnH
— Chris Hadfield (@Cmdr_Hadfield) May 26, 2015

Astronaut @AstroKarenN on Sally Ride's influence: "Those 'firsts' kind of stick in your head'" http://t.co/SCAD3Zx9cL pic.twitter.com/c76Nrm2tfj
— amightygirl (@amightygirl) May 24, 2015

Check out the short video Google put together highlighting Olivia Huynh, the artist behind today's doodles: