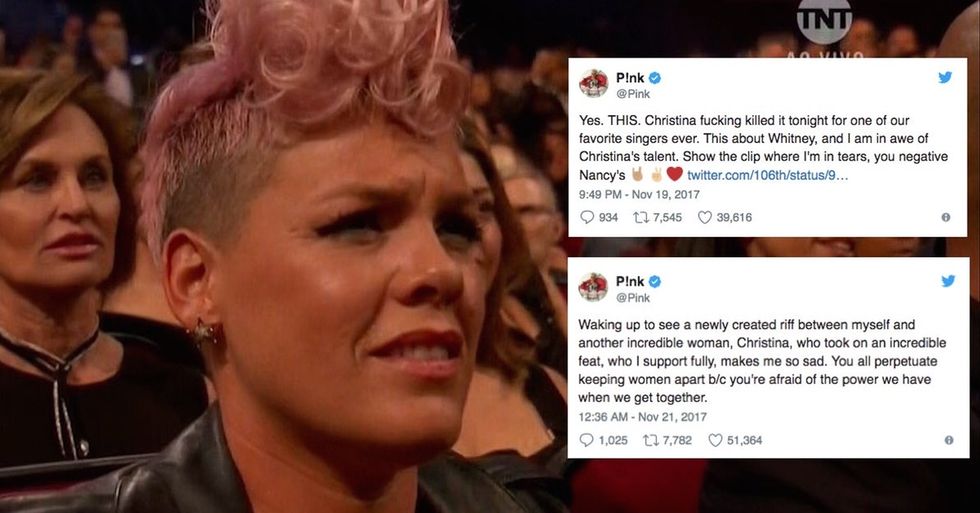 During the American Music Awards, Christina Aguilera performed an emotional tribute to the late and iconic Whitney Houston.

Houston's ballads are notoriously challenging to sing, and not everyone thought Aguilera was up to the task. Some viewers even took screencaps of different celebrities in the audience who producers cut to during the performance, a few of whom appeared to be cringing or grimacing.

Including singer Pink, whose reaction face went viral on Twitter.

Immediately after the show, Pink posted on Twitter to make things crystal clear: That was no grimace on her face.

The singer noted that she had loved the performance and that people were misinterpreting her awe as discomfort.

"I am in awe of Christina's talent," she wrote. "Show the clip where I'm in tears, you negative Nancy's!"

That didn't stop the "Pink disses Christina!" narrative from spreading across the internet.

The whole thing hearkened back to the pair's admittedly complicated relationship over the years. (Pink has said Aguilera actually tried to punch her once.)

So Pink returned to Twitter two days later with an even stronger message.

"You all perpetuate keeping women apart b/c you're afraid of the power we have when we get together," she wrote.

Her tweet spread far and wide, with over 7,000 retweets along with hundreds of messages of support.

Our culture has a bizarre fascination with Hollywood feuds and friendships gone sour, especially those involving women.

From Debbie Reynolds and Elizabeth Taylor in the late 1950s, to Katy Perry versus Taylor Swift in the 2000s, we can't seem to get enough of who's beefing with whom. Pink says it has to stop.

Not everyone is going to get along or be friends. But in America in 2017, it's counterproductive to celebrate petty divisiveness or, worse, manufacture it where it doesn't exist. The very least we can do is listen to women when they're trying to support each other, instead of forcing them into tired catfight narratives.

In an age where an alarming amount of men in entertainment are being accused of sexual harassment, at best, coercion and rape at worst, it's especially irresponsible to artificially pit women against each other based on split-second facial expressions.