Parisians hug, touch, and cuddle with these giant blocks of ice — just like the artist wanted.

"Art has the ability to change our perceptions and perspectives on the world." 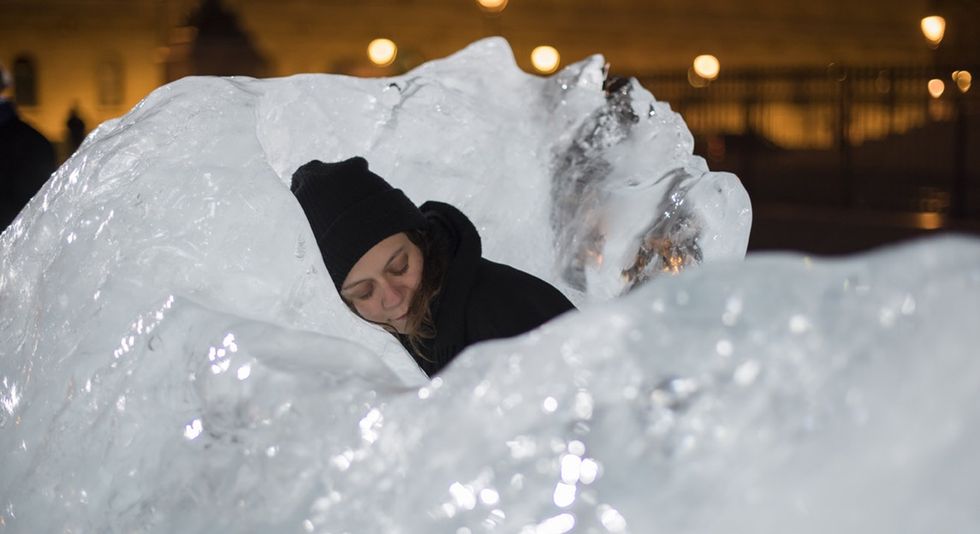 Global leaders are now meeting in France for the COP21 climate change conference. The meeting is being held in Le Bourget, a suburb of Paris. Although, really, maybe it would be more appropriate to hold it on a melting iceberg, considering what they're discussing.

One artist, however, figured that if the leaders weren't going to go to Greenland, he'd just have to bring Greenland to them.

Olafur Eliasson, a Danish-Icelandic artist, teamed up with Minik Rosing, a Danish geology professor and arctic researcher, to wrangle 12 mini-icebergs all the way from Nuuk, Greenland, to Paris' Latin Quarter, placing them on the world leaders' proverbial doorstep.

"Ice Watch: Paris" is what he's calling it.

The blocks were placed in a circle in the Place du Panthéon, a famous square outside of a mausoleum for French heroes and icons.

Not everyone gets to live in places with glaciers. Many people may have only ever seen glaciers on television. By giving people the chance to actually go see, taste, and touch a part of one, Eliasson hopes he can make their disappearance feel more visceral and real.

“As an artist I hope my works touch people, which in turn can make something that may have previously seemed quite abstract into reality. Art has the ability to change our perceptions and perspectives on the world and Ice Watch makes the climate challenges we are facing tangible. I hope it will inspire shared commitment to taking climate action." — Olafur Eliasson, IceWatchParis.com

The 12 mini-bergs were originally pieces of glacier that had fallen into the sea, where Eliasson and Rosing lassoed them up. A cargo ship then took them to Denmark in refrigerated containers, where they were loaded onto trucks for Paris.

At the time of capture, their combined weight was 100 metric tons (80 now that they've slimmed down during their trip). If that sounds like a lot, you should know it's minuscule compared to the 200 billion metric tons of glacial ice Greenland loses each year.

And it's these glacial bergs that a lot of people are watching out for. Glaciers trap water up on land, away from the ocean. This keeps sea levels down. But when the glaciers break apart and do fall into the sea, well, it's like dumping ice cubes into a full glass of water. Things are going to overflow.

If this seems vaguely familiar, it's because this isn't the first time Eliasson has used ice to make a statement. He set up another Ice Watch installation in Copenhagen a few months ago.

Watch this video to see Eliasson and Rosing's team wrangling wild icebergs off the coast of Greenland.

Not everyone will get a chance to see "Ice Watch: Paris" before the blocks melt, but if you're serious about saving our glaciers, sign this petition from the NRDC to demand climate action from our world leaders. They'll present it at the Paris climate talks!