One hospital's December tradition brings people together in the most adorable way. 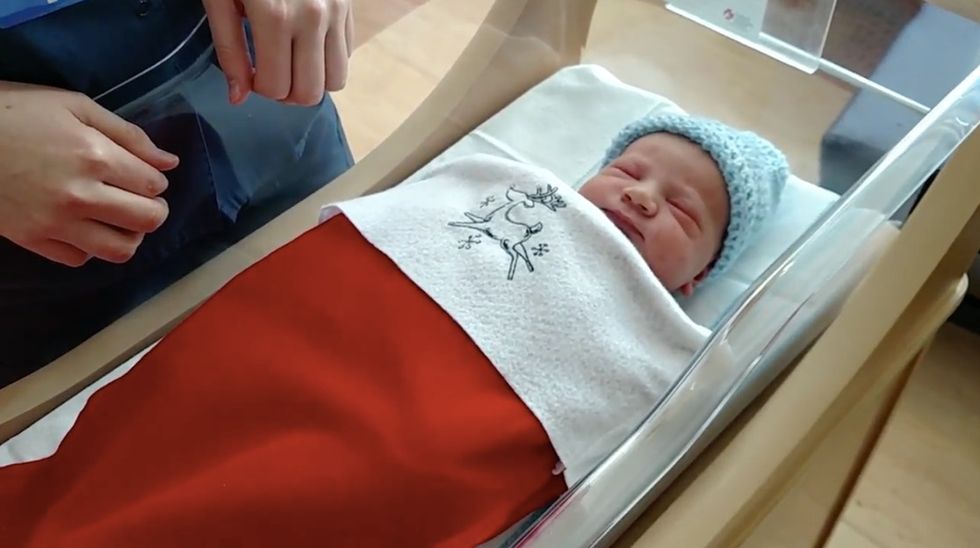 Every December, something very special (and very adorable) is tucked inside the holiday stockings at one California hospital — BABIES!

Since the 1930s, Redlands Community Hospital has been swaddling December babies in cozy stockings sewn by local volunteers as a special gift to the parents.

The Linen Committee — a group of hospital auxiliary volunteers who mainly took care of sheets and towels — first started the project. By the 1960s, it had really taken off, and a full-fledged sewing committee was needed just to make the stockings.

Today, the yearly tradition is undertaken with the help of the Redlands Sewing Center and a strong community of people who want to keep the tradition alive.

"We accept all volunteers that are willing to come and help us out," says Sue Carlson, event coordinator at Redlands Sewing Center. "We don’t even ask them to bring their own machines. They use our store machines, so they just come down."

"Last year, we had a customer that came in just to buy something," she adds, "and we showed her what was going on, and she sat down for like an hour and donated some time. ... To me, that’s what it’s about."

Seeing people come together to make these stockings is an amazing thing. But what's even more amazing is seeing the heartwarming reactions to stocking-clad babies.

"We don’t really announce it," Nikyah Pfeiffer, marketing manager at Redlands Community Hospital, says. "It’s more of a pleasant surprise that we like to give to our patients."

Of course, some parents do know about the tradition — it's hard to keep something this adorable a secret from year to year — but that doesn't take away any of the magic.

That's because the tradition means a lot to the families. "I think it makes them feel like they’re a part of something bigger than just having their baby born in a hospital," Pfeiffer says. "It helps bring a sense of community, and they’re always grateful that they had their baby here."

Unfortunately, the tradition was paused for a while in the 1990s but then brought back by Sylvia Terifay, a longtime volunteer and coordinator for the stocking tradition, in 2005 with the help of the Redlands Sewing Center. She passed away this year, and the community is dedicated now more than ever to continue the tradition in her honor.

One thing that will never disappear is the lasting effect Redlands Community Hospital has had on families over generations.

Wrapping babies in holidays stockings isn't the only way the hospital is working to build up the sense of community either.

Since the early 1900s, the hospital has had another tradition — Baby Day — that takes place every five years. On this day, the families of the babies born at Redlands Community Hospital gather for one big group picture.

The hospital hangs Baby Day photos in a hallway dedicated to the history of the community, and it has become a landmark of sorts with local families.

"They bring their children and their grandchildren back to the hospital to show them their particular picture," says Pfeiffer. "It’s just a generational thing that’s really great to see because you don’t get that type of connection very much with hospitals anymore."

These traditions have managed to forge a powerful bond between the hospital and its community that has lasted for decades.

And this bond will continue for generations to come.

After all, who's going to get tired of seeing a newborn snuggled into a holiday stocking?