Moringa is known as 'The Miracle Tree,' and its powers are spreading worldwide.

Put it on a salad or drink it in a cocktail. Moringa is about to be everywhere. 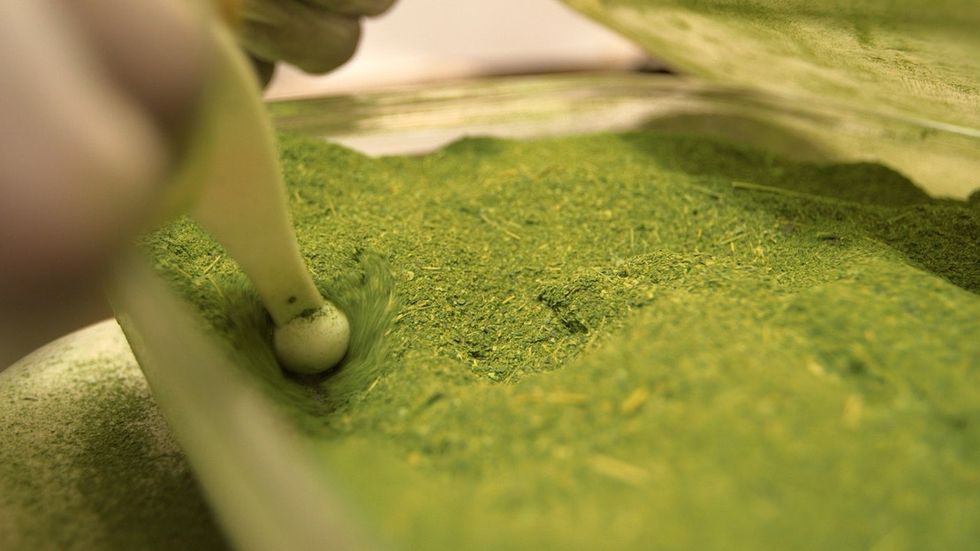 Would you know if you had treasure in your own backyard?

What if it grew right in front of you?

For some farmers, that's the moringa tree, which is anything but ordinary. Those who utilize it don't call it "The Miracle Tree" and "Mother's Best Friend" for nothin'.

No ordinary leaf: Moringa tree leaves are said to be full of vitamins, minerals, protein, fiber, and amino acids.

Posted by Upworthy on Thursday, January 5, 2017

The moringa tree is an exciting and tasty solution to ending global hunger and poverty.

"We've helped farmers in Ghana earn over $350,000 worth in income from what was just a backyard tree called moringa," says Kwami Williams, from the organization MoringaConnect.

The reason why? Its leaves are ridiculously amazing. They are tiny but pack a punch, containing more vitamin A than carrots, more protein than eggs, more calcium than milk, and more iron than spinach.

Handfuls of moringa leaves. All images via Upworthy.

Moringa has a bitter taste, similar to green tea, and it's a good source of energy. While the benefits of the plant are still being studied, advocates say it has potential as an anti-inflammatory and that it can help diabetic patients lower their glucose levels. It can also help new moms with milk production, and its seeds are said to produce one of nature’s finest cosmetic oils for hair and skin care. The list of its benefits goes on.

While moringa, native to parts of Africa and Asia, has been utilized as food and medicine for thousands of years, its true impact has barely scratched the surface. And that has researchers excited.

It's being considered a "superfood" for those who consume it and also for those that grow and sell it. The fast-growing and drought-resistant tree thrives in the exact locations that have high malnutrition and poverty rates in parts of western Africa, southern Asia, and South America. The thinking is that by encouraging more local consumption and sustainably spreading it globally, it might be the way out for many struggling families.

Hannah Mensah, a single mother of three, can send her kids to school because of her moringa trees.

Hannah with her children.

She is one of 2,000 local farmers working with MoringaConnect, a young organization tapping into the true potential of the plant. By growing and selling it with the group, she'll be able to put her kids through secondary education with the money she makes and invest more in equipment to keep her farm running for the long term.

So far, MoringaConnect has worked with local farmers, like Mensah, to plant over 250,000 moringa trees in Ghana, which has helped farmers multiply their incomes by 10. And that's just one group.

Be on the lookout for moringa near you.

You can use the leaf powder to make a marinade or put it in a smoothie; the sky is really the limit on this one. In the United States, energy bars, supplements, and powder made from moringa are starting to pop up on shelves and on new trend lists.  With all the hype surrounding the plant, odds are you're about to see it a lot more.

And if you do try it, you'll have the satisfaction of knowing that moringa isn't just good for your health, it might also be good for the entire world.