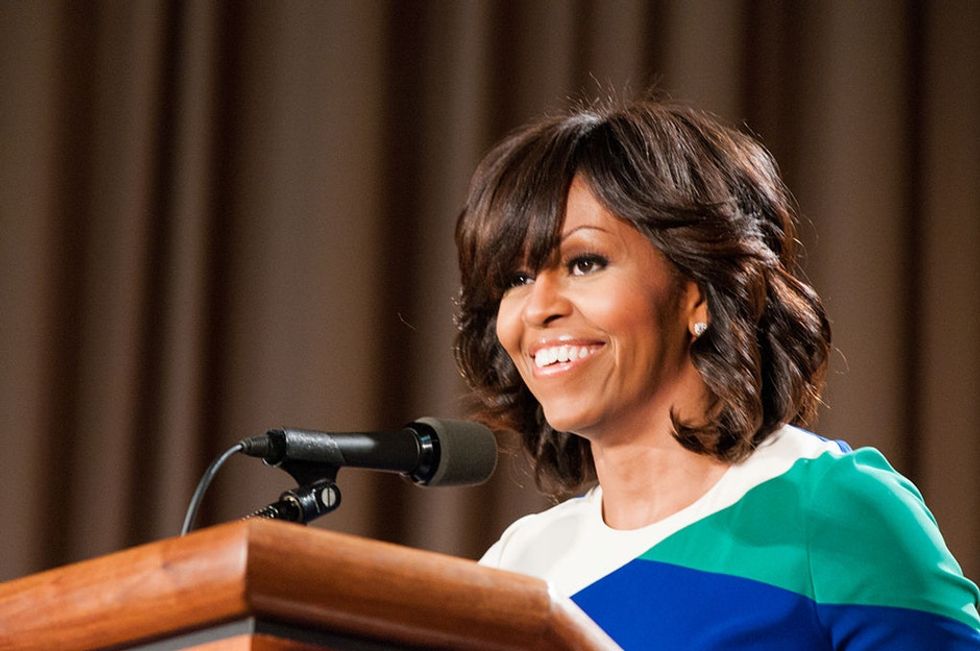 Former first lady Michelle Obama knows about healthy eating. And sometimes that means telling your kids to eat their veggies.

Michelle and Barack both obviously love their kids. But being the "good parent," as she has dubbed her husband, is like being a good president; it's not all fun and games.

She used the apt parenting analogy during her speech at a women's leadership conference on April 5, 2018, to put Barack Obama's presidency in context:

"I always felt like for the eight years Barack was president, it was like having the 'good parent' at home," she said. "The responsible parent, the one who told you to eat your carrots and go to bed on time."

She compared Trump's presidency to a candy binge.

Michelle Obama is clearly not a fan of Trump. Still, she found an insightful and funny way to compare his presidency to her husband's — and it totally makes sense.

"And now we have the other parent. We thought it'd feel fun — maybe it feels fun for now because we can eat candy all day and stay up late and not follow the rules."

More tough love: She explained why she won't ever run for president.

Michelle Obama is one of the most popular public figures in America. There are a lot of people who would absolutely love it if she ran for president. But she doesn't feel the same way.

"The reason why I don’t want to run for president — and I can’t speak for Oprah — but my sense is that, first of all, you have to want the job," she said. "And you just can’t say, 'Well, you're a woman, run,'" she continued. "We just can't find the women we like and ask them to do it because there are millions of women who are inclined and do have the passion for politics."

She went even further, saying we shouldn't pick a president solely based on seductive traits like charisma and celebrity, something she thinks had an outsized impact during the 2016 election between Trump and Hillary Clinton.

"Just because I gave a good speech, I'm smart and intelligent doesn't mean I should be the next president," she said. "That's not how we should pick the president. That's been our problem. We're very shortsighted about how we think about selecting the commander-in-chief."

Even if she never runs for office, Michelle Obama once again showed us that strong role models lead by example.

It would be easy for her to simply take shots at Trump.

The fact that she used her own likability as a reason to explain why she won't, and maybe even shouldn't, run for president is the kind of humble and principled thing real leaders do.

There's no doubt Michelle Obama could do a lot of good if she were president, but thankfully she's still here to inspire us in her own chosen ways.