Michael Ian Black makes some great points about how we raise boys.

There's nothing wrong with healthy masculinity, but there's a toxic variety as well. 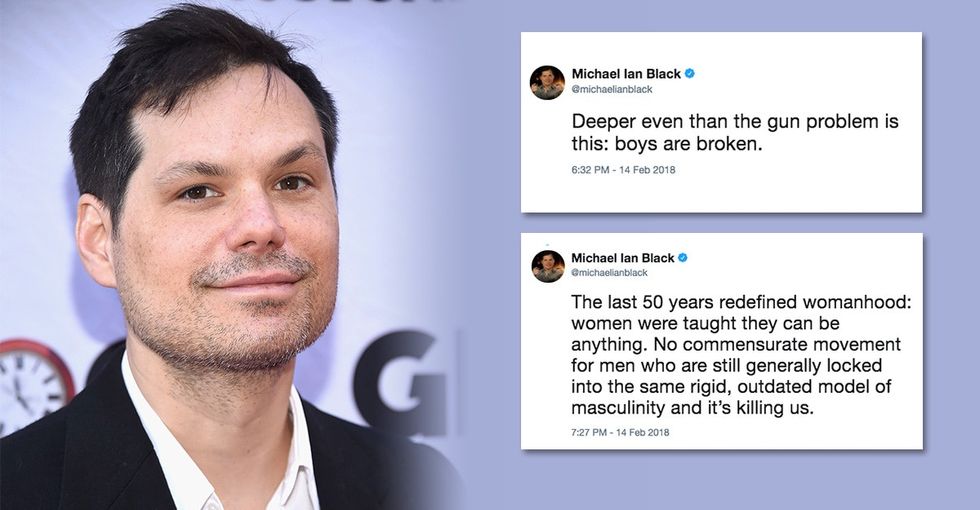 Just hours earlier, a gunman shot and killed 17 students and teachers at Marjory Stoneman Douglas High School in Parkland, Florida. The tragedy led Black to get a bit introspective about his gender and speculate the role society's more toxic messages play in these much-too-frequent massacres.

"Until we fix men, we need to fix the gun problem," he wrote on Twitter. "The last 50 years redefined womanhood: Women were taught they can be anything. No commensurate movement for men who are still generally locked into the same rigid, outdated model of masculinity and it's killing us."

Even talking about this topic invites ridicule because it’s so scary for most men (and women). Men are adrift and n… https://t.co/LFwsyYe0bw
— Michael Ian Black (@Michael Ian Black)1518658643.0

A week later, The New York Times published an op-ed by Black tackling the issue in more detail.

"Too many boys are trapped in the same suffocating, outdated model of masculinity, where manhood is measured in strength, where there is no way to be vulnerable without being emasculated, where manliness is about having power over others," Black wrote. "They are trapped, and they don’t even have the language to talk about how they feel about being trapped, because the language that exists to discuss the full range of human emotion is still viewed as sensitive and feminine."

The point he was making was that we aren't doing enough as a society to encourage and support boys and men emotionally. He's right — and there's data to back him up.

On March 7, LGBTQ student organization GLSEN shared some interesting findings related to Black's argument. It's the same point that's been made a number of times before by writers like Bryan Epps, Lauren Sandler, and Jennifer Wright: Society's outdated vision of masculinity can be harmful.

The argument is not "anti-men" or "anti-boys," but a plea to provide the necessary support to sidestep toxic masculinity.

According to GLSEN, a study of the 31 mass school shootings between 1995 and 2015 found that "each shooter was male and all experienced challenges to their performance of masculinity, through homophobia and other forms of gender policing," to which they responded by trying to "prove their tormentors wrong."

Disturbingly, it looks as though teachers are actually getting less involved in trying to protect their students from bullying.

Creating an environment where bullies thrive unchecked is bad for all students. When that bullying centers on how boys express their masculinity, it simply results in more bullies and, occasionally, violence.

The way we talk to and about boys fosters unhealthy personal expectations, leaving many to feel isolated, alone, and afraid to seek help when they need it.

"Globally, boys are allowed far less space than girls to act outside the norms forced upon them," GLSEN tweeted.

Of course, as the group notes, "most boys experience some gender policing and don't commit acts of mass violence like in Parkland." It's not meant to be an excuse for atrocities, but maybe a bit of an explanation.

There's nothing wrong with being a man, but maybe we do need to rethink what it means to be one.

"Our society's typical notion of what it means to be a man might keep boys from reaching out or accepting help," GLSEN tweeted, continuing:

"It may also lead them to assert masculinity via weapons that are often exalted as symbols and tools of masculine strength and power. ... There is no one cause of mass school shootings. Nor should there be one response. Yet, for the wellbeing of young people of all genders, it's crucial for EVERYONE (in schools and elsewhere) to expand our ideas of what being a man can and should be."

"We know ourselves to be men, but don't know how to be our whole selves," Black tweeted.

The last two tweets from his thread tell the whole story — the fragility, the fear, the need for help. Having these tough, honest conversations, however, are a great place to start changing the world for the better, for children of all genders, not just boys.

"We’re terrified of being viewed as something other than men. We know ourselves to be men, but don’t know how to be our whole selves. A lot of us (me included) either shut off or experience deep shame or rage. Or all three. Again: Men are terrified," Black wrote. "Even talking about this topic invites ridicule because it’s so scary for most men (and women). Men are adrift and nobody is talking about it and nobody’s doing anything about it and it’s killing us."