LeBron James announced he'll pay for over 1,000 kids to go to college. 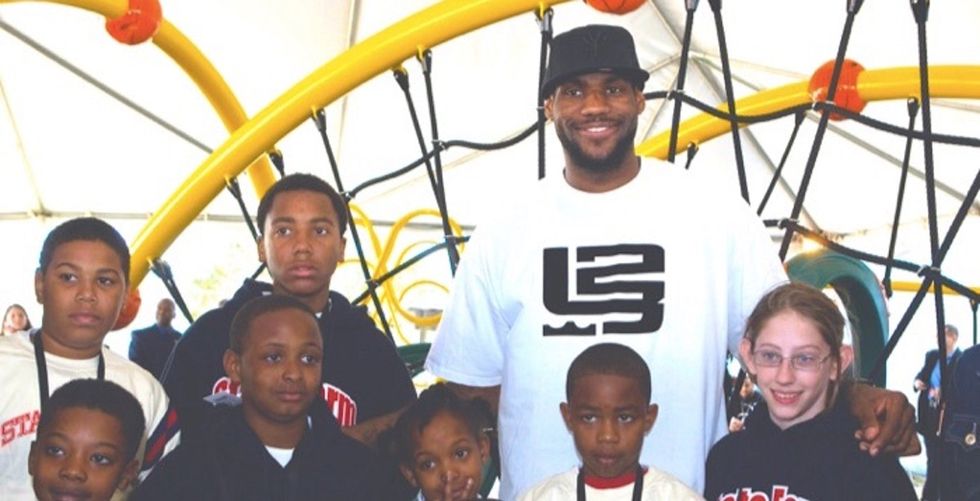 And now, he's the king of the classroom.

James is offering over 1,100 full college scholarships to students in his hometown of Akron, Ohio.

During an event Aug. 13, 2015, at Cedar Point amusement park, James announced that the LeBron James Family Foundation is teaming up with the University of Akron to fully fund more than 1,100 college scholarships to qualifying kids-in-need enrolled in his Akron I Promise Network.

And they're hoping to fund even more students as the number of kids in AIPN grows. James said at the packed announcement:

The college scholarships are the latest in a long list of philanthropic endeavors for LeBron James.

Since launching his professional career and foundation in 2003, James has funded multiple community programs and partnerships. One program, Wheels for Education, annually inducts a new class of Akron third-grade students and offers camps, incentives, and support over the next 10 years to encourage them to finish school.

When Wheels for Education students enter middle school, they graduate into AIPN. The first class of AIPN students, who will matriculate in 2021, are eligible to receive full scholarships to the University of Akron.

The University of Akron is a polytechnic university with over 300 areas of study. Photo by Erik Drost/Flickr (altered).

At current tuition rates, the college scholarships will cost the foundation at least $41 million.

The University of Akron is working with the LeBron James Family Foundation over the next five years to raise the money, but when it comes to helping out his hometown, no expense is too great for LeBron James.

Raised by his mother in some of northeast Ohio's toughest neighborhoods, James has made a point to give back to the community. In a 2014 interview, James lovingly described the place that shaped him:

Hats off to you, LeBron. Thanks for giving back to your community and helping kids in need get one step closer to their dreams.

Feel free to celebrate this accomplishment by working on that "Space Jam" reboot.