This working mom's fight for a better world gets a boost from her new baby. 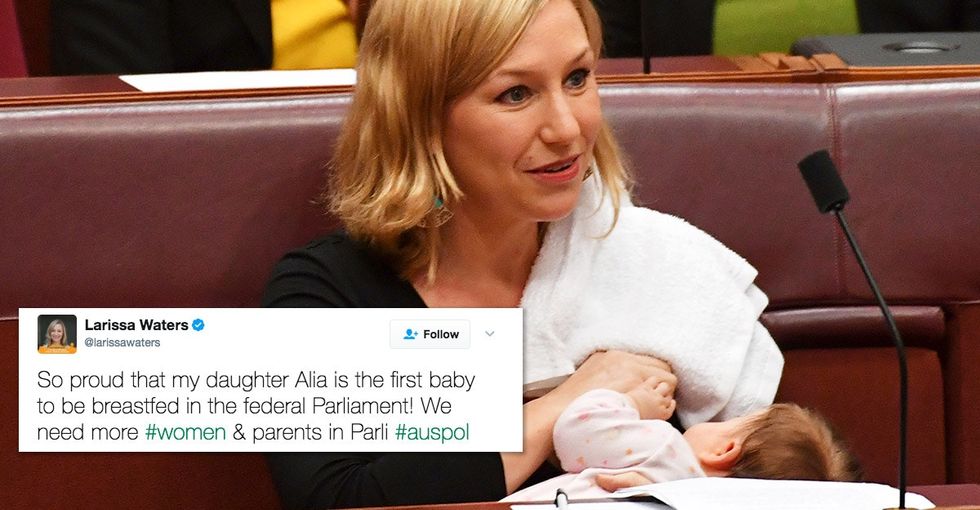 Think politics is filled with nothing but whining babies? Just wait until you see what's happening in Australia.

Queensland Sen. Larissa Waters just became the first woman to breastfeed on the floor of Australia's parliament. Thanks to a 2016 rule that gave the all-clear for moms to breast- and bottle-feed on the job, Waters made a bit of history when she brought 10-week-old Alia Joy to work this week.

So proud that my daughter Alia is the first baby to be breastfed in the federal Parliament! We need more #women & p… https://t.co/dTh4lFI6jr
— Larissa Waters (@Larissa Waters)1494311317.0

The whole thing might seem kind of silly, but there's actually a really important message here.

"If we want more young women in Parliament, we must make the rules more family friendly to allow new mothers and new fathers to balance their parliamentary and parental duties," Waters said in November.

Normalizing the act of breastfeeding (really folks, it shouldn't be that big of a deal) by making accommodations for new parents' hectic schedules and fighting for paid parental leave are both part of the fight for the more equal and welcoming world Waters wants. Sadly, some countries don't have paid maternal or paternal leave (most notably the U.S.), and there's still an unfortunate stigma and disgust surrounding breastfeeding (especially in public) that needs to stop.

Waters longs for the day when a mother feeding her child in public or at work isn't news.

"We need family-friendly and flexible workplaces for all so this isn't news anymore," she tweeted ahead of an interview with Sky News.

Announcing Alia's birth in an International Women's Day Facebook post back in March, Waters offered up a sweet note to her new daughter along with a mission statement about her purpose in motherhood and in politics.

What a fitting day to announce the arrival of my second daughter, Alia Joy! She has a head of hair like an 80s pop star...

"She is even more inspiration for continuing our work to address gender inequality and stem dangerous climate change. (And yes, if she's hungry, she will be breastfed in the Senate chamber)," she wrote, later adding, "Our public health system is excellent and must be fought for and protected! To all the awesome mums out there juggling everything — you are the real superheroes."