John Oliver knows what to do with South Carolina's Confederate flag. 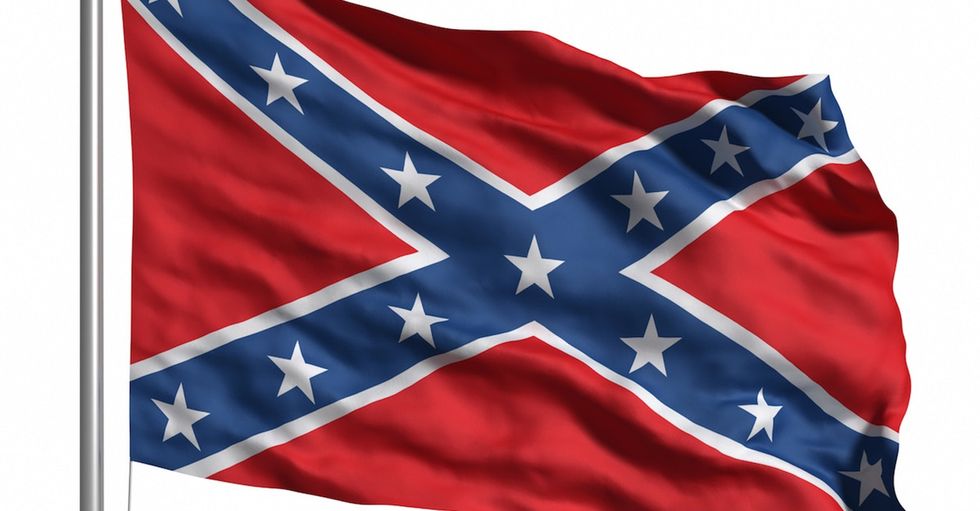 A debate on removing the Confederate flag from South Carolina's Capitol grounds has begun.

Here's one view on this from the great John Oliver. He also mentions a simple idea on what to do with that flag once it's finally taken down, at 4:36. Sounds like a good idea to me.

Is it really about "heritage"?

After the terrorist attack at the Charleston Emanuel African Methodist Episcopal Church in Charleston, I've seen a lot of comments from folks saying the flag is about “heritage" and “tradition." Some say that for those who grew up in the South, the Confederate flag is a source of pride.

It's all about the context.

There's a reason nobody flies a Nazi flag without sustaining major flak from everybody who sees it. In most of the U.S., the same goes for the Confederate, or "Rebel," flag — it's a symbol of slavery and secession.

So should the flag be taken down? Yes. Here's why.

Even the declared reasons for South Carolina seceding from the union are about slavery.

The Confederate flag represents the largest reason why the South rebelled against the North during the Civil War: slavery. South Carolina in particular — the first state to secede — was quite clear about that.

Here are a few paragraphs from the "Declaration of the Immediate Causes Which Induce and Justify the Secession of South Carolina from the Federal Union" of 1860.

We affirm that these ends for which this Government was instituted have been defeated, and the Government itself hasbeen made destructive of them by the action of the non-slaveholding States. Those States have assume the right ofdeciding upon the propriety of our domestic institutions; and have denied the rights of property established in fifteen ofthe States and recognized by the Constitution; they have denounced as sinful the institution of slavery; they havepermitted open establishment among them of societies, whose avowed object is to disturb the peace and to eloign theproperty of the citizens of other States. They have encouraged and assisted thousands of our slaves to leave their homes;and those who remain, have been incited by emissaries, books and pictures to servile insurrection.

For twenty-five years this agitation has been steadily increasing, until it has now secured to its aid the power of thecommon Government. Observing the forms of the Constitution, a sectional party has found within that Article establishingthe Executive Department, the means of subverting the Constitution itself. A geographical line has been drawn across theUnion, and all the States north of that line have united in the election of a man to the high office of President of the UnitedStates, whose opinions and purposes are hostile to slavery. He is to be entrusted with the administration of the commonGovernment, because he has declared that that "Government cannot endure permanently half slave, half free," and that thepublic mind must rest in the belief that slavery is in the course of ultimate extinction.
...
We, therefore, the People of South Carolina ... have solemnly declared that the Union heretofore existing between thisState and the other States of North America, is dissolved, and that the State of South Carolina has resumed her positionamong the nations of the world, as a separate and independent State; with full power to levy war, conclude peace, contractalliances, establish commerce, and to do all other acts and things which independent States may of right do.
Adopted December 24, 1860

What happened in Charleston is one of countless painful wounds on top of scars for generations of people. The flag represents that history.

Yes, it was a terrorist attack. Yes, it was for racist reasons. And yes, flying the Confederate flag at South Carolina's state capitol building is offensive — even more so now. It always was, but it's especially blatant and poignant after this gut-punch to the American experience.

(Update: South Carolina's governor is calling for removal of the flag, joining a chorus of others. It still takes a two-thirds majority of each chamber of the state's legislature for it to happen, but the stakes are higher now.)