Jimmy Kimmel's emotional monologue on gun violence is a must-watch.

Turns out that not doing anything hasn't worked very well. 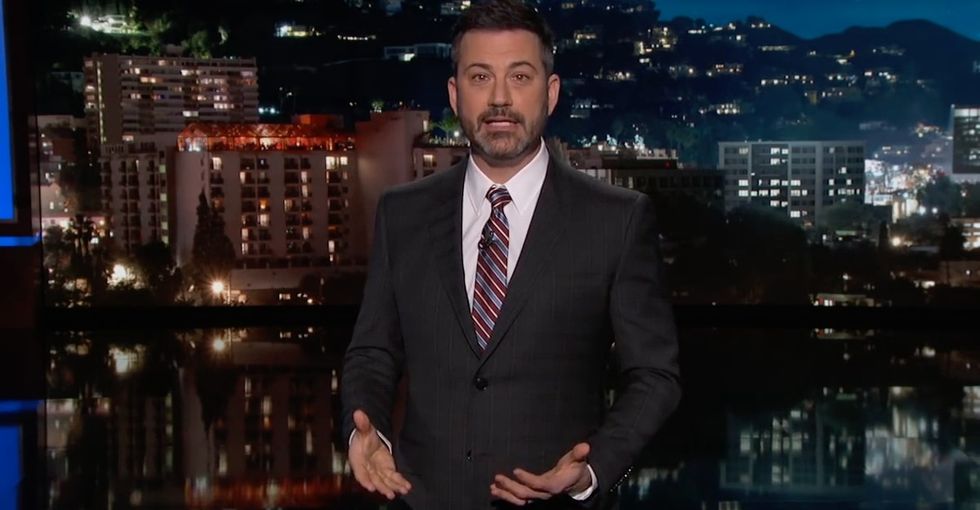 After the October 2017 shooting in Las Vegas that left concertgoers dead, Jimmy Kimmel devoted his monologue to the topic of gun violence. After this week's massacre in Parkland, Florida, he did it again.

The first time around, Kimmel peppered his monologue with stats, ideas, and arguments — almost all of which could be recycled for our current response — but this time, he decided to take a simpler approach, asking simply that lawmakers do "something." For many members of Congress, that may still be asking for too much.

He opened his Feb. 14 monologue with a nod to Trump's response to the shooting — not so much what Trump said, but what he didn't say.

Trump's live address to the nation on Feb. 15 was widely panned for its lack of any substantial policy suggestions. In fact, throughout the speech, he made zero mention of guns at all, instead making a few passing references to Scripture and suggesting that the root of our country's gun violence problem is mental health — not a good look, given that he struck down an Obama-era regulation restricting gun access to those with mental health issues.

It was an empty shell of the type of speech we've come to expect from our leaders, and that's why it's crucial that people with large platforms like Jimmy Kimmel use them to say what our president won't: It's time for action.

"What we need are laws — real laws — that do everything possible to keep assault rifles out of the hands of people who are going to shoot our kids," Kimmel said with tears beginning to well.

He went on to slam politicians who insist, time after time, that we can't "politicize" these tragedies or that it's always somehow "too soon" to have a tough conversation.

"Don’t you dare let anyone say it’s too soon to be talking about this. Because you said it after Vegas, you said it after Sandy Hook, you say that after every one of these eight fatal school shootings we had in this country this year," he pleaded.

"Children are being murdered," he said, choking up. "We still haven’t even talked about it. You still haven’t done anything about this. Nothing. You’ve literally done nothing."

There are a lot of simple, common sense gun safety measures supported across the political spectrum, so why won't Congress act?

According to a 2017 report published by The New York Times, with data sourced from the Law Center to Prevent Gun Violence, some of the most effective solutions — such as reinstating the assault weapons ban (which expired in 2004), a ban on sales to violent criminals, and universal background checks — are also some of the most widely-supported (67%, 85%, and 89%, respectively).

It shouldn't be controversial to enact simple, effective laws. Our members of Congress simply choose not to carry out the will of their constituents and often take a fatalistic approach to the issue by suggesting there's no point in making it harder for people to access guns since they'll find a way to get one anyway

Democrat, Republican, Independent, or "other," Kimmel's exactly right: Now is the time to call on our politicians to stop ignoring the problem and do something.