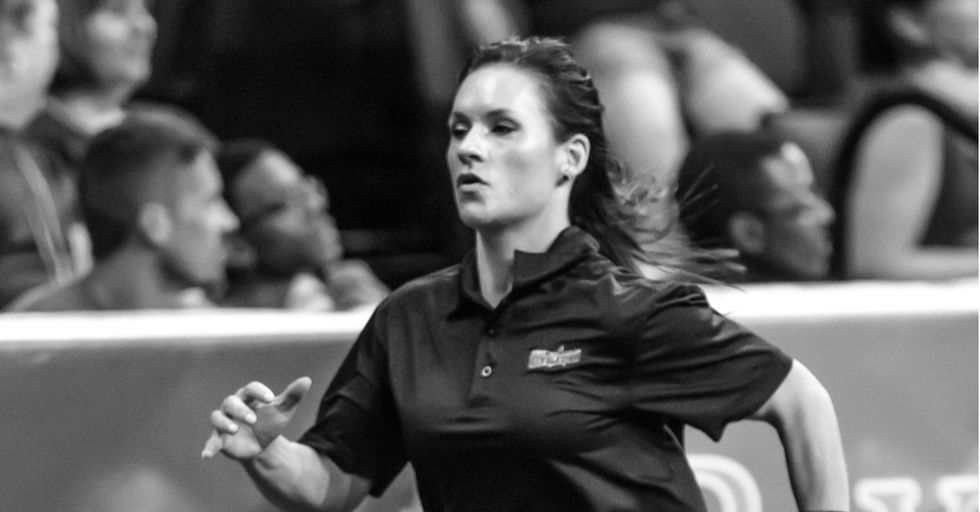 Jen Welter is a professional badass. Her resume is absolutely incredible.

She is a professional American football player and a doctor of psychology, and she was the first woman to coach a men's professional football team, running the linebackers and special teams units for the Texas Revolution arena football team in 2015.

That's Jen flying off the edge for the sack. GIF from Jen Welter.

But if you only remember one thing about Jen Welter, know this: She once played running back in a game alongside the Texas Revolution (before her coaching days), making her the first woman to ever play a non-kicking position in a men's professional football game.

And that's just the beginning of her amazing story.

Jen was just hired as a coaching intern for the Arizona Cardinals. She's the first woman to ever hold any type of coaching position in the NFL.

Welter was an assistant coach for the Texas Revolution this year. Photo courtesy of Jerry Acuff Photography.

The Cardinals announced on Monday that Jen would be joining the team through training camp and the preseason as a coaching intern working with the team's inside linebackers. The team has also scheduled a press conference to introduce Jen on Tuesday.

The Cardinals head coach, Bruce Arians, said in March: "Someone asked me yesterday, 'When are we going to have female coaches?' The minute they can prove they can make a player better, they'll be hired."

I think we can all agree there's a little more to it than that, otherwise this would have happened a long time ago. And there's no guarantee that Welter will have a job once her internship ends before the start of the regular season.

But if her track record tells us anything, it's that she won't be intimidated by the hulking men in that locker room.

If they're smart, they'll realize they can learn a lot from her.

2015 is shaping up to be a really exciting season for fans of the NFL.

Jen's not afraid to lower the boom on a man twice her size. Photo courtesy of Fred Shots Photography.

Every season swirls with intrigue – young players on the cusp of stardom and veteran superstars battling their fading skills, Cinderella teams and perennial juggernauts. The 2015 NFL season will have all that, and more — including the league's first female referee, and now its first female coach.

The NFL has taken a lot of criticism over the last few years, much of it well-deserved, but it's awesome to see the game so many of us love adapting and making changes to better itself.