Ilhan Omar calls Tucker Carlson a 'racist fool' after his straight-up Nazi rant about her. 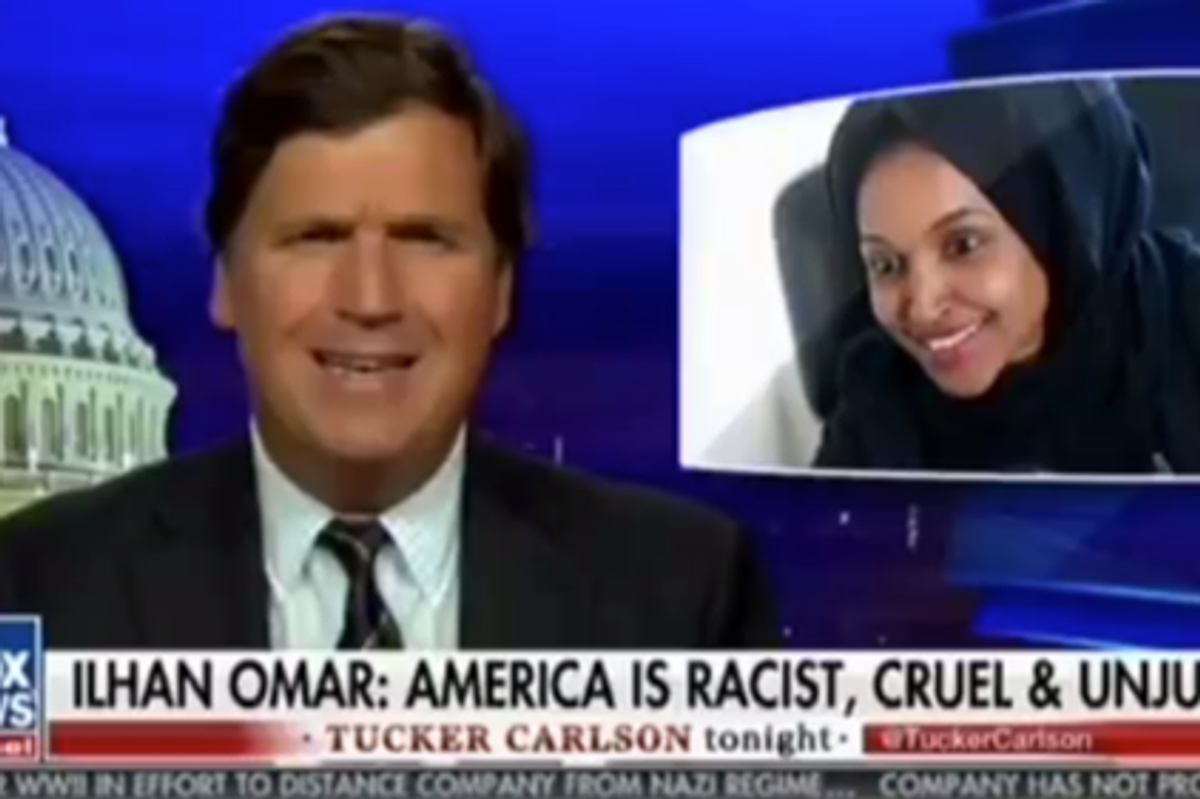 The evil Brooks Brothers mannequin did a segment on Congresswoman Ilhan Omar after a recent Washington Post profile told her life story. In the WaPo piece, Omar told a group of high school students:

"I grew up in an extremely unjust society, and the only thing that made my family excited about coming to the United States was that the United States was supposed to be the country that guaranteed justice to all. So, I feel it necessary for me to speak about that promise that's not kept."

Tucker's takeaway is that Omar's disappointment in America not living up to its ideals is tantamount to treason, a lesson that Muslim immigrants and people of color are a threat to America at large.

An absolutely stunning racist attack on @IlhanMN from Tucker. I'm shocked She is "living proof that the way we pra… https://t.co/BrsZkZsROr
— Andrew Lawrence (@Andrew Lawrence)1562721119.0

"Ilhan Omar is living proof that the way we practice immigration has become dangerous to this country," he said, telling his viewers that criticism of American justice is dangerous when it comes from a woman in a hijab. Donald Trump's whole campaign was calling America a broken trash country that needs to be "great again," but Tucker and friends called him a savior, not a danger.

Tucker proceeded to argue that immigrants like Omar come from cultures that are so "different" that they will never have what it takes to be "American."

That's just straight up Nazi trash, who used the folklore of the "German volk" as a reason to annihilate anybody who was insufficiently Aryan.

"Maybe we're importing people from places whose values are simply antithetical to ours," he said. "This can not continue. It's not sustainable. No country can import large numbers of people who hate it and survive. The Romans were the last to try that, with predictable results."

Omar, for her part, laughed the attack off, calling the racist fool a "racist fool."

An absolutely stunning racist attack on @IlhanMN from Tucker. I'm shocked She is "living proof that the way we pra… https://t.co/BrsZkZsROr
— Andrew Lawrence (@Andrew Lawrence)1562721119.0

Omar's colleagues in Congress are also condemning this trash.

If there's any doubt who the president sides with in this terrifying, boring "feud," he took the opportunity to retweet an article bashing CNN and calling Omar an anti-Semite.

The president of the United States has weighed in on Tucker Carlson saying that "Ilhan Omar is living proof that th… https://t.co/F1UbC3QVOq
— Matthew Gertz (@Matthew Gertz)1562766843.0

Tucker Carlson implying that you can't love something if you criticize it is more anti-Semitic than anything Ilhan Omar has ever said.

We criticize because we love. Just ask my mother.