How people are making their voices heard in the fight against gun violence.

Here's how you can help make gun safety a reality. 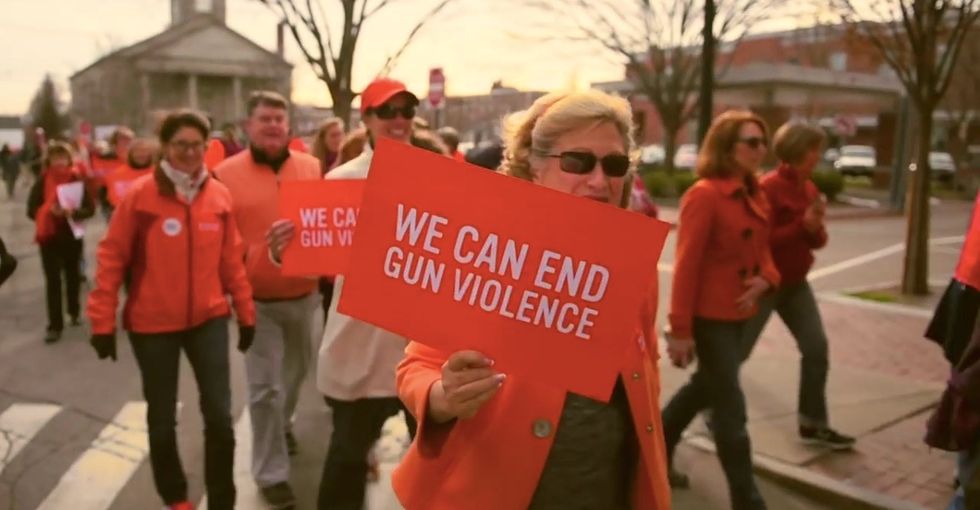 Orange is loud, and that's exactly why it's the color of choice for commemorating National Gun Violence Awareness Day.

In the United States, a discussion about gun violence is a noisy one. With shootings happening on an all-too-frequent basis, it's sometimes hard for regular people to be heard over lobbyists and politicians when it comes to finding a solution.

Orange is also significant because it's the color hunters wear to warn others not to shoot. In that sense, orange is a symbol of gun safety.

The idea to wear orange originated with the classmates of Hadiya Pendleton, a 15-year-old girl shot to death in Chicago in 2013.

In 2015, Hadiya's friends teamed up with Everytown for Gun Safety to send a message. That message: It's time to take gun violence seriously. No one else should die the way Hadiya did.

The movement has earned the attention of celebrities and public figures around the country.

...the Empire State Building even got in on the action...

...and President Obama offered his support.

But you don't need to be famous to take a stand against gun violence. The core goal of the movement is to get regular everyday people involved.

It's about using our voices to usher in change. It's about promoting gun safety.

"The number one way to prevent gun violence is to include a criminal background check on every gun sale," Lucy McBath, faith and outreach leader for Everytown for Gun Safety tells Upworthy.

"We have to close the loopholes in our laws that make it easy for felons, domestic abusers, and other dangerous people to buy guns without a background check. I'd encourage everyone who wants to get involved to join Everytown and their local Moms Demand Action chapter and talk to their legislators about enacting responsible gun laws."

The recent shooting on the UCLA campus serves as a reminder that gun violence can happen anywhere, and it's important to act before it's too late.

"[The UCLA shooting] shows that gun violence affects all of us and can happen anywhere," says McBath, whose son Jordan Davis was shot and killed in 2012.

"Yesterday's tragic events make the June 2 Wear Orange message even more important," she says. "Don't wait until it's your loved one or your community — more than 90 Americans are shot and killed every day and it's time we all come together to say we can do better — there is so much more we can do to prevent gun violence."

Learn more about how you can help bring an end to gun violence at WearOrange.com, and watch the video below from Everytown for Gun Safety for additional information.