Here's a version of Woody Guthrie's 'This Land Is Your Land' that might just light you right up.

"This Land Is Your Land," reimagined. Beautifully. 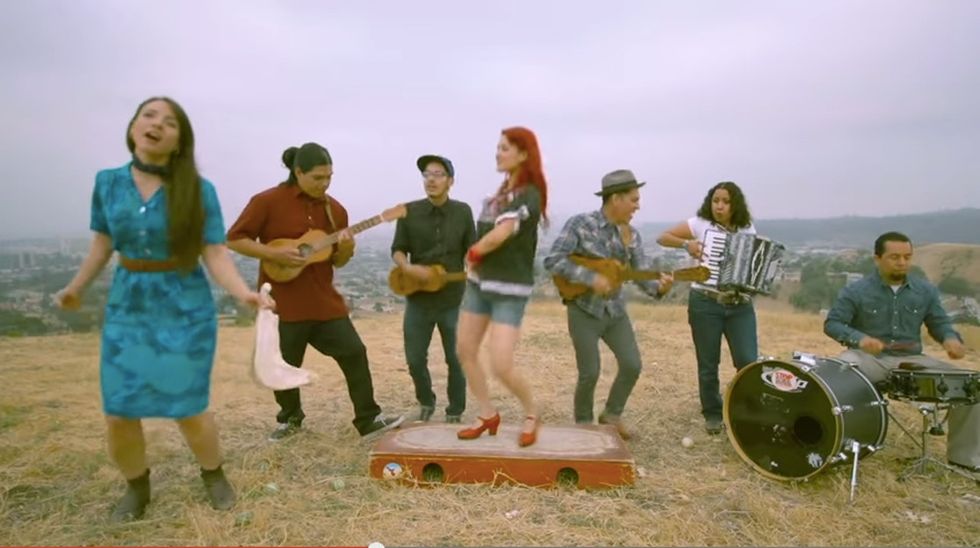 Woody Guthrie originally wrote "This Land Is Your Land" in response to "God Bless America," which he felt wasn't realistic.

When he first composed the song in 1941, he titled it "God Blessed America for Me." But eventually, he changed the title to the well-known version you've probably heard many times.

The song has long endured — in 2002, the Library Of Congress added it to the National Recording Registry.

But what you might not know is that there are some lyrics that are frequently dropped when the song is printed or recorded.

Why? Because they tend to make people uncomfortable.

Here's what the lyrics to "This Land Is Your Land" usually look like when they're given to school kids in music class.

Most people know the first three or four stanzas as the whole song:

"This Land Is Your Land"

Words and music by Woody Guthrie

This land is your land, this land is my land
From California to the New York island;
From the red wood forest to the Gulf Stream waters
This land was made for you and me.


As I was walking that ribbon of highway,
I saw above me that endless skyway:
I saw below me that golden valley:
This land was made for you and me.


I've roamed and rambled and I followed my footsteps
To the sparkling sands of her diamond deserts;
And all around me a voice was sounding:
This land was made for you and me.


When the sun came shining, and I was strolling,
And the wheat fields waving and the dust clouds rolling,
As the fog was lifting a voice was chanting:
This land was made for you and me.

But there's so much more to it — as in, another three stanzas.

The next three are frequently left off of lyric sheets and even some recordings of the song. They're my favorite, really.

As I went walking I saw a sign there
And on the sign it said "No Trespassing."
But on the other side it didn't say nothing,
That side was made for you and me.


In the shadow of the steeple I saw my people,
By the relief office I seen my people;
As they stood there hungry, I stood there asking
Is this land made for you and me?

Now that I've got the song humming in your head ... time to change it up a bit.

Check out this version by Las Cafeteras, which is simply delightful. And very true to the original meaning of the song, I think.

When you're imagining what this land "should" look like, consider that it's made up of a multitude of diverse cultures that are all as beautiful as this land itself.