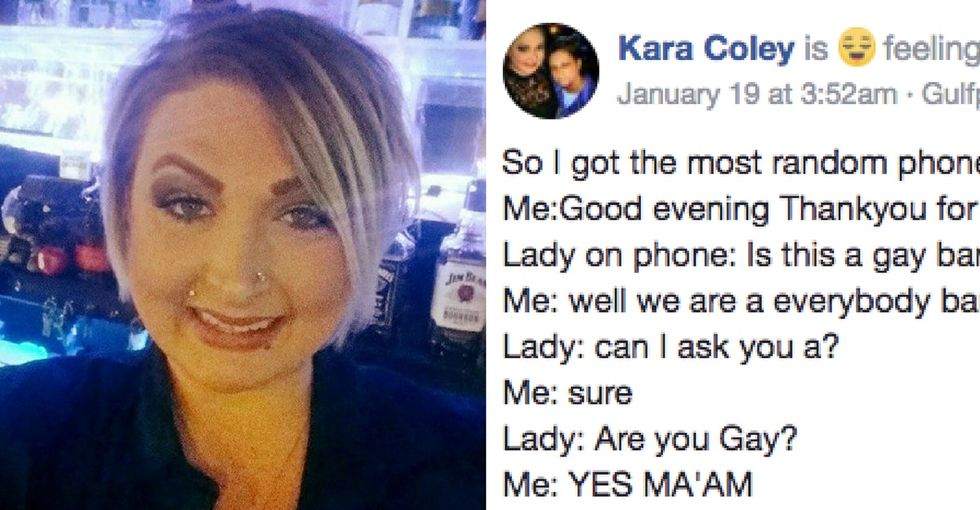 This article originally appeared on 01.26.18


"Can I ask you a question?" the caller followed up. "Are you gay?"

Then things got interesting.

"What was the one thing you wanted from your parents when you came out?" the woman continued.

Coley, who's tended bar for about 17 years, was a little caught off guard. In all her years of experience fielding requests and helping others working in the service industry, she'd never received a question like that.

"My son just came out to me," the woman continued on the other end of the line. "And I don't want to say anything that may mess him up in the head."

Coley thought for a moment. Then she asked the woman if she accepted her son for who he is.

"You should definitely let him know that you love and accept him!" Coley said. "I think everything will be OK from there!"

The woman thanked Coley for her input and they parted ways.

Later that night, in the early hours of Jan. 19, Coley decided to post the entire interaction to her Facebook page, noting how "random" it all had been.

In the days following, her post went viral, amassing over 1,500 likes and hundreds of shares.

So I got the most random phone call at the bar tonight! 😀Me:Good evening Thankyou for calling Sipps!Lady on phone: Is...
Posted by Kara Coley on Friday, January 19, 2018

The post's comment section soon filled with love and gratitude for Coley's simple but endearing answer.

"My heart is truly touched by this," one Facebook user wrote. "A parent wanting to support correctly, and a beautiful response. This is progress. This is love and acceptance in the rawest form."

"Kara, this old granny lesbian is so grateful for you, and for a parent that thought outside the box to get advice!" another user chimed in. "Keep being you!"

"[The response] has been amazing," Coley writes. She believes her post struck a chord with friends and strangers alike because people are looking for encouraging news: "Every day people wake up and there's so much negativity in the world — people just need a breath of fresh air!"

For parents to an LGBTQ child, it's still vital to understand the facts too, Coley noted: "Educate yourself [on LGBTQ issues] and do a little research."

Ideally, parents should have access to better resources than their local gay bar when it comes to getting help with LGBTQ parenting. At the end of the day, though, the best thing you can do as a parent is make sure your kid understands you're there through thick and thin.

"Just knowing you have someone in your corner takes a little weight off your shoulders," Coley wrote.

Learn more about being a good ally as a parent of an LGBTQ child at PFLAG (Parents, Families, and Friends of Lesbians and Gays). If you're a young LGBTQ person who needs help, resources are available at The Trevor Project.