What do coffee, a pharmacy and rock-and-roll have in common? In Philly, everything. 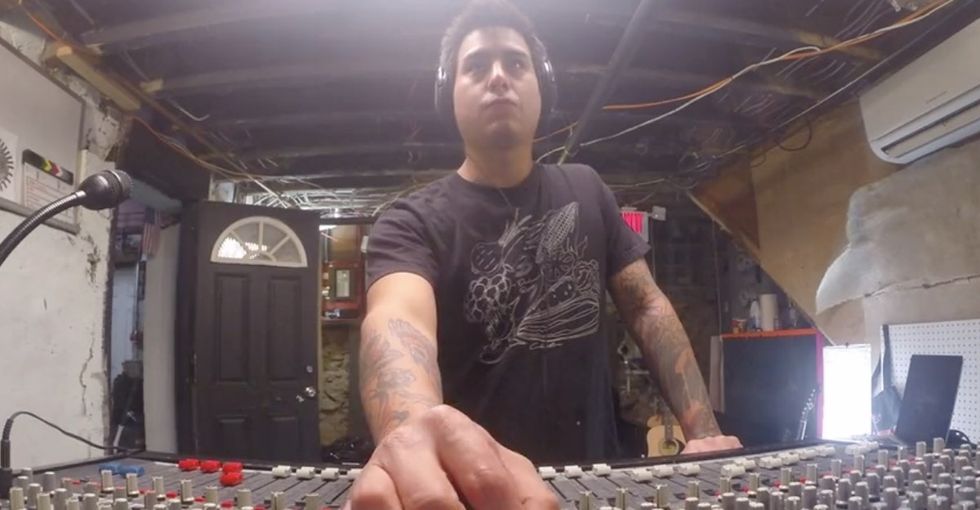 Gary Viteri was living the rock-and-roll life when an accident changed everything.

As a musician in a rock band since he was 17, Gary Viteri lived a fast-paced, go-big-or-go-home lifestyle. But when he got hit by a truck and was basically immobilized for a year, his focus changed. "The accident was definitely a type of blessing," says Viteri. "I needed to take a break. I was moving too fast."

He looked around at his community in south Philadelphia and recognized the need for a community-based space for creative people to gather. An abandoned building that had once been a clinic and pharmacy caught his eye, and the idea for The Pharmacy coffee shop and music venue was born.

The Pharmacy in its early stages. Photo via Viteri.

He wanted to create a space where local musicians could collaborate, perform and build a following.

"I definitely envisioned a place that would be not just a cafe but more of a community center for art and music and creative types," says Viteri.

So he renovated the upstairs of the old building to create a hybrid coffee shop and live performance space. Up and coming musicians often have a hard time getting their music out there for people to hear. The Pharmacy helps fill that need. It also gives artists a space to share creative ideas and support one another.

But there is another need that Viteri wants to fill. Local musicians often struggle to afford recording time in professional music studios. At up to $200 per hour, studio space is out of reach for many.

The Pharmacy had one space left that could be used for such a purpose—the basement.

So Viteri organized a massive cleanup of The Pharmacy basement to build an affordable recording studio.

"We continue to kind of clean and restore the building," says Viteri. "The basement was always on the back burner because we had to initially just start the shop. The potential is there to do something like a studio."

Viteri had the space rezoned as a music studio, but needed help in getting the basement cleaned and revitalized in preparation for building it. That's where Clorox jumped in—as part of their What Comes Next Project, the brand recognized Viteri's vision and provided support.

Volunteers helped take part in the effort, mopping floors, putting up walls, and lending their creative talents to make the space bright and unique.

"It feels really special just seeing how many people care about the place and want to lend a hand," says Viteri. "Friends and family, but also neighbors and local bands and stuff. A lot of people like to throw around the word 'community,' but for us it really is."

Putting in the studio space means a lot to Viteri as a member of that community. "When I was coming up in music," he says, "to have a studio was almost unattainable. It was like something you had to save up for. But for here, to be able to come to just a corner spot to do a demo or EP or something at an affordable, lo-fi rate is important for us."

Viteri hopes the studio space will be a launching pad for local musicians.

The Pharmacy basement studio is meant to be a place for musicians to get their start. "It's less about having the fanciest gear," says Viteri. "It's more about being comfortable and having a space that's clean, but also the right kind of vibe and environment for folks to just create."

"If we can reach out to the local bands," he adds, "the studio will definitely have an impact on the folks that could really use it. We want to see you grow out of this place, get too big to play here, then go and work at other studios. So many places have done this for me, and gave me opportunities. I think that's kind of why I felt the responsibility to kind of pay it forward."

Going from traveling as a musician to running a cafe and music studio has been a big change for Viteri, but one he's proud of. "If I can do it," he says, "there's no reason why anyone should not think that they can try and do their own thing."

Learn more about Viteri and The Pharmacy Cafe in the video below:

We can all be part of the giving movement

We all know that small acts of kindness can turn into something big, but does that apply to something as small as a pair of socks?

Yes, it turns out. More than you might think.

A fresh pair of socks is a simple comfort easily taken for granted for most, but for individuals experiencing homelessness—they are a rare commodity. Currently, more than 500,000 people in the U.S. are experiencing homelessness on any given night. Being unstably housed—whether that’s couch surfing, living on the streets, or somewhere in between—often means rarely taking your shoes off, walking for most if not all of the day, and having little access to laundry facilities. And since shelters are not able to provide pre-worn socks due to hygienic reasons, that very basic need is still not met, even if some help is provided. That’s why socks are the #1 most requested clothing item in shelters.

Socks are a simple comfort not everyone has access to

When the founders of Bombas, Dave Heath and Randy Goldberg, discovered this problem, they decided to be part of the solution. Using a One Purchased = One Donated business model, Bombas helps provide not only durable, high-quality socks, but also t-shirts and underwear (the top three most requested clothing items in shelters) to those in need nationwide. These meticulously designed donation products include added features intended to offer comfort, quality, and dignity to those experiencing homelessness.

Over the years, Bombas' mission has grown into an enormous movement, with more than 75 million items donated to date and a focus on providing support and visibility to the organizations and people that empower these donations. These are the incredible individuals who are doing the hard work to support those experiencing —or at risk of—homelessness in their communities every day.

Folks like Shirley Raines, creator of Beauty 2 The Streetz. Every Saturday, Raines and her team help those experiencing homelessness on Skid Row in Los Angeles “feel human” with free makeovers, haircuts, food, gift bags and (thanks to Bombas) fresh socks. 500 pairs, every week.

Raines is out there helping people feel their beautiful best

Or Director of Step Forward David Pinson in Cincinnati, Ohio, who offers Bombas donations to those trying to recover from addiction. Launched in 2009, the Step Forward program encourages participation in community walking/running events in order to build confidence and discipline—two major keys to successful rehabilitation. For each marathon, runners are outfitted with special shirts, shoes—and yes, socks—to help make their goals more achievable.

Help even reaches the Front Street Clinic of Juneau, Alaska, where Casey Ploof, APRN, and David Norris, RN give out free healthcare to those experiencing homelessness. Because it rains nearly 200 days a year there, it can be very common for people to get trench foot—a very serious condition that, when left untreated, can require amputation. Casey and Dave can help treat trench foot, but without fresh, clean socks, the condition returns. Luckily, their supply is abundant thanks to Bombas. As Casey shared, “people will walk across town and then walk from the valley just to come here to get more socks.”

The Bombas Impact Report provides details on Bombas’s mission and is full of similar inspiring stories that show how the biggest acts of kindness can come from even the smallest packages. Since its inception in 2013, the company has built a network of over 3,500 Giving Partners in all 50 states, including shelters, nonprofits and community organizations dedicated to supporting our neighbors who are experiencing- or at risk- of homelessness.

Their success has proven that, yes, a simple pair of socks can be a helping hand, an important conversation starter and a link to humanity.

You can also be a part of the solution. Learn more and find the complete Bombas Impact Report by clicking here.

From Your Site Articles
Related Articles Around the Web
humanity
Education

This article originally appeared on 08.05.21

Six years ago, a high school student named Christopher Justice eloquently explained the multiple problems with flying the Confederate flag. A video clip of Justice's truth bomb has made the viral rounds a few times since then, and here it is once again getting the attention it deserves.

Justice doesn't just explain why the flag is seen as a symbol of racism. He also explains the history of when the flag originated and why flying a Confederate flag makes no sense for people who claim to be loyal Americans.

But that clip, as great as it is, is a small part of the whole story. Knowing how the discussion came about and seeing the full debate in context is even more impressive.

May Wilkerson
via Tod Perry

18-year-old Twitter user Aimee recently took to Twitter to ask something most of us have probably wondered about without even realizing it:

"Serious question, what the fuck is this for?" she asked, next to a photo of that handle on the ceiling of every car that we all knew about and probably wondered about but never thought to even ask for some reason?!?!?!?!?!?