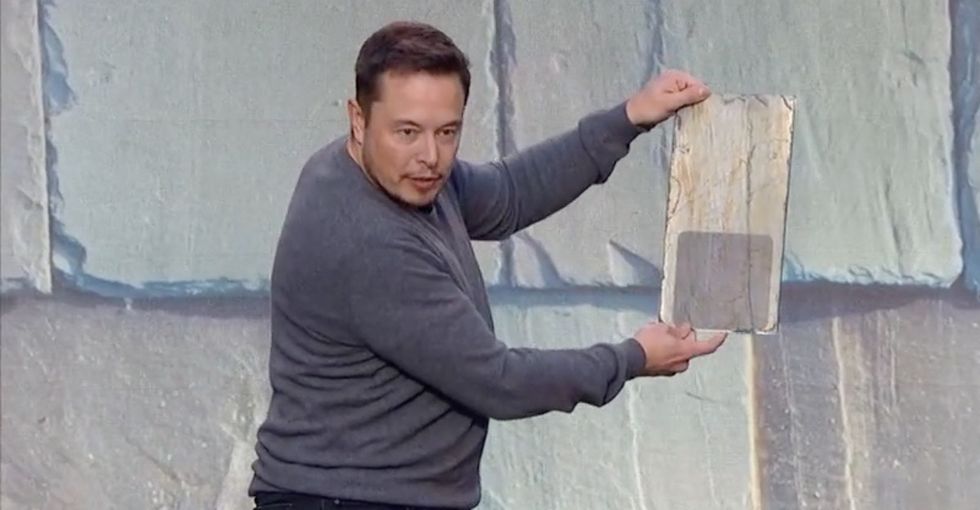 We all know the feeling. Looking at your energy bill can be a lot like this:

How the heck did I use $30,000 worth of electricity? Was it all my Tesla coils? Photo from iStock.

Electricity is expensive. Renewable energy could help, but the technology has its hurdles to overcome, including cost, availability, and infrastructure.

There's also another psychological barb: A lot of renewable energy tech is kind of goofy-looking.

So Elon Musk has a new plan. He wants to make solar power super pretty.

On Friday, Elon Musk announced that his company would make glass roofing shingles that double as solar panels.

There have been solar shingles before, but what makes Tesla's different is they're incredibly pretty. Compared to those big, bulky, blue ping-pong tables we probably normally think of, these are downright artistic. Musk hopes by making the panels visually attractive, they'll entice more homeowners to add them to their roofs.

They work like thousands of little solar panels all hooked together.

They're basically mini-solar cells covered in a durable glass coating that will protect them from the elements. They can be designed to match different shapes and styles to fit the house.

The shingles will likely be out of reach for most homeowners at first. Tesla hasn't announced a price, but a similar product by Dow costs about $20,000 for a small patch of 350 shingles. Tesla's website does suggest that with the lower utility bills they'd end up paying for themselves, however, and government incentives could help too.

All that said, for now, they'll probably be similar to Tesla's first electric cars — a cool device for people who are really into new technology. But they could end up becoming more popular: Think of all the people driving electric cars now. And we have seen solar power in general get massively cheaper in the last few years, a trend that is likely to continue.

This is a neat example of how renewables could end up integrated into everyday life.

Right now we depend on just a few huge power plants, but in the future inventions like this — combined with more affordable energy storage options — could turn our homes, offices, and garages into mini power plants.

This could not only help us transition away from fossil fuels and toward more green energy, it could also be a lot cheaper and make the market more dynamic.