Ellen DeGeneres weighed in on the Starbucks cup controversy. And yes, she nailed it.

Leave it to Ellen. 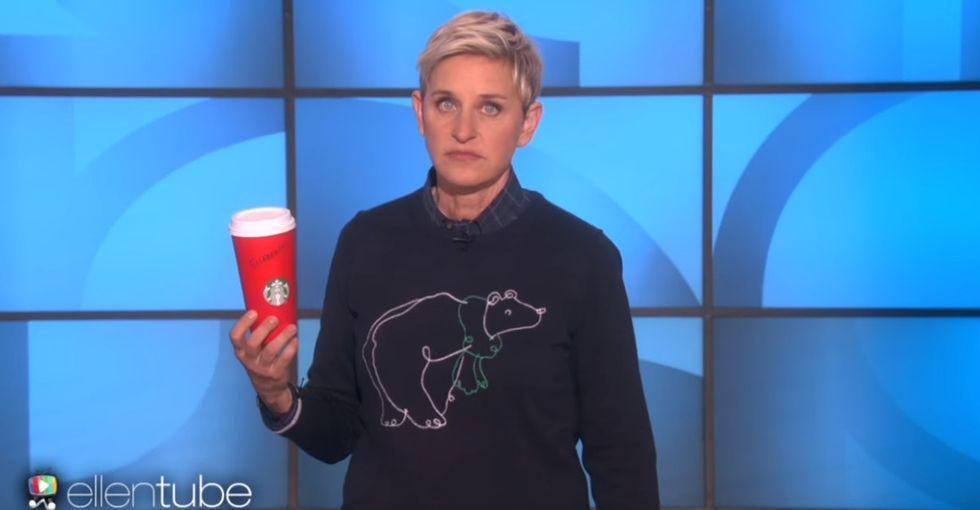 In case you missed it, some coffee drinkers are very upset about Starbucks' new holiday cups.

They feel the plain red cups are a sign of the times — that Starbucks is just the latest company to remove Christmas from the holiday season.

In years past, Starbucks' holiday cups had a bit more ... let's say flair to them, featuring things like snowflakes and tree ornaments. In 2015, however, the coffee giant seems to have gone with a more minimalistic approach for the cups' design.

Admittedly, they are be a bit boring (hey, I like my snowflakes):

“This is a denial of historical reality and the great Christian heritage behind the American dream that has so benefitted Starbucks," Andrea Williams of the group Christian Concern told Breitbart. “This also denies the hope of Jesus Christ and his story told so powerfully at this time of year."

For the record, Starbucks has never featured overtly religious symbols — let alone the story of Jesus — on its holidays cups (unless Jesus was a cartoon snowman). And it continues to sell Christmas Blend coffee and advent calendars, by the way.

See these holiday cups from 2012? I believe that's a snowman under there, next to the scribbles. Photo by Eva Hambach/AFP/Getty Images.

Nonetheless, outrage sparked the #MerryChristmasStarbucks hashtag among some people of faith (certainly not all) who are sharing photos of themselves with their Starbucks coffee after asking baristas to write "Merry Christmas" on the cups. Which the baristas do, because Starbucks does not have an anti-Christmas policy.

As expected, not everyone has been on board with the hashtag or its message. So those who think the holiday cups are just ... well, cups ... created their own hashtag, #ItsJustACup, poking fun at their cause. A digital war of words ensued.

And this week, Ellen DeGeneres joined in on what has become this year's first War on Christmas debate.

As DeGeneres often does so brilliantly with cultural controversies, she weighed in on the holiday cup drama.

During her show this week, DeGeneres broke down exactly why some people are bent out of shape about these gosh darn cups.

She mentioned that Starbucks released a statement explaining its holiday cups were not at all intended to be anti-anything, but to "create a culture of belonging, inclusion and diversity" by welcoming "customers from all backgrounds and religions in [its] stores around the world."

But DeGeneres clearly was not having it.

"I mean, look at this cup," she quipped. "You might as well call it a Satan sipper."

DeGeneres' solution to those who feel like Starbucks needs a bit more Christmas in its stores?

They're called Starbucks Holiday Vision Glasses and you can purchase them for the low, completely reasonable price of $99, as DeGeneres hilariously explains in the clip below.

It's certainly worth three minutes of your time.