During his 1988 campaign, George H.W. Bush warned his son about 'new friends.'

'As we move closer to November, you'll find you've got a lot of new friends. They may become real friends. Or...' 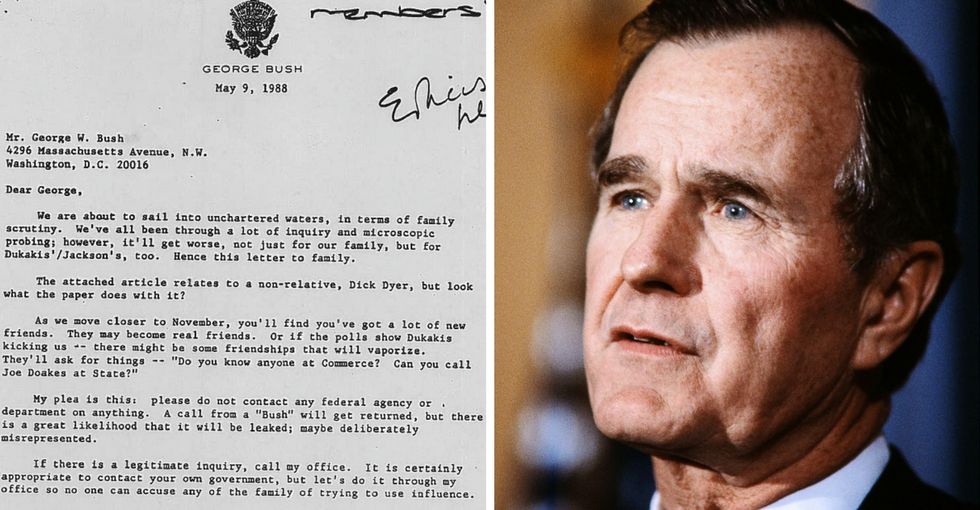 When first running for president in 1988, George H.W. Bush sent a letter to his oldest son, George W. Bush, who was 41 years old at the time.

"We are about to sail into uncharted waters, in terms of family scrutiny," he told his son in the letter, which was shared by The New York Times in 2015. "We've all been through a lot of inquiry and microscopic probing; however, it'll get worse, not just for our family, but for [fellow presidential candidates] Dukakis'/Jackson's, too. Hence this letter to family."

With the letter, Bush Sr. sent an April 1988 New York Times article about a distant relative who tried to use "his contact" with the then-vice president to obtain a contract.

Using that as a warning, the elder Bush reminded his son to be wary of "new friends."

Those "new friends" will ask for favors, he warned, reminding his son of the weight and power his name would have as the election drew closer.

It's totally appropriate for a candidate's adult son — especially his oldest son, carrying on his namesake, who has political dreams of his own — to want to help out in a presidential campaign. But there are limits to what can and should be done. A very deliberate line has to be drawn between loyalty and an abuse of power or influence.

"As we move closer to November, you'll find you've got a lot of new friends. They may become real friends. Or if the polls show Dukakis kicking us — there might be some friendships that will vaporize. They'll ask for things — 'Do you know anyone at Commerce? Can you call Joe Doakes at State?'

My plea is this: please do not contact any federal agency or department on anything. A call from a 'Bush' will get returned, but there is a great likelihood that it will be leaked; maybe deliberately misrepresented."

If one of those "new friends" were to make a request that could be viewed as an abuse of power, even if the request was legitimate, Bush Sr. asked his son to be careful to avoid even the appearance of improper action or corruption.

"If there is a legitimate inquiry, call my office. It is certainly appropriate to contact your own government, but let's do it through my office so no one can accuse any of the family of trying to use influence.

I know I must sound very defensive, but — believe me — every effort will be made to find some phone call, some inquiry, some letter that can be made to appear improper."

In hindsight, it was a remarkable letter, and another instance where George H.W. Bush showed himself to be a real stand-up guy.

Along with his 1995 letter of resignation to the National Rifle Association and a powerful 1993 letter of congratulations and well wishes to then-president-elect Bill Clinton, George H.W. Bush can sometimes feel like an artifact from a fundamentally different time in American politics.

Sure, merely avoiding the appearance of improper action doesn't necessarily mean that the administration was scandal-free — there will always be questions about what Bush knew about the Iran-Contra affair and his office's decision to issue pardons to Reagan-era officials for their involvement, for example — but at least it seemed like politicians made an effort to steer clear of scandal.

He closed out the letter noting that he hoped he would no longer have to send such "preachy letters" and signed it, "Devotedly, Dad." For him, being a good father meant trying to keep his son out of trouble — even if it meant passing up a potentially juicy campaign advantage.