Drowning is a top cause of death for kids. This Olympian wants to change that. 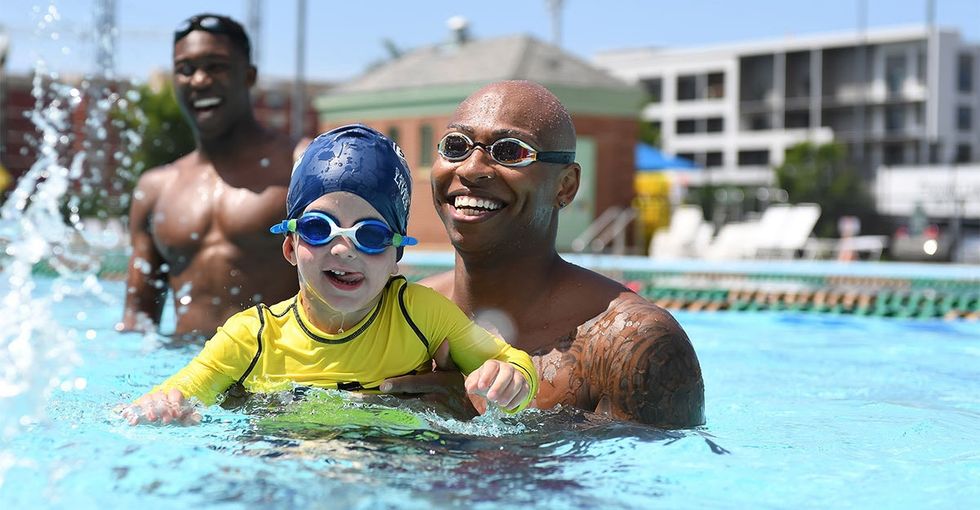 "How many of you guys like being in the water?"

That's what two-time Olympic gold medalist Cullen Jones usually asks a group of squealing, excited kids in bathing suits at pools around the country. Millions of kids will jump in a pool on a hot summer day. But, summertime fun shouldn't come at the expense of safety. Jones and the USA Swimming Foundation want to make sure it's a safe experience for everyone.

In the summer of 2018, the USA Swimming Foundation's Make a Splash initiative is sending more than 1 million kids to the pool to learn to swim, and they're doing it to reach families and kids who might not otherwise have access to lessons

According to research from Pediatrics and Adolescent Medicine, formal swimming lessons reduces the likelihood of childhood drowning by 88%.

Make a Splash is working to make swimming lessons accessible for everyone by offering free or low-cost swim lessons. Research shows that 87% of swimmers with little or no ability have plans to go to a swimming facility this summer at least once, and 34% plan to go 10 or more times. Even more concerning, drowning is a top cause of unintentional death for all children under age 14 both in the U.S. and globally. But, the Make a Splash team is working to reduce those numbers.

For 12 years, through the Make a Splash initiative, the USA Swimming Foundation has partnered with learn-to-swim providers in all 50 states, offering low-cost or free swimming lessons and educating more than 6 million children and their families on the importance of learning to swim. The initiative's mission strikes a chord for Jones personally, which is why he's devoted nine years to being an ambassador for the program.

Jones loved being in the water at an early age even though he couldn't swim.

A trip to a water park changed his life forever. Jones flipped over in an inner tube in the water, and while he ultimately was unharmed, it was enough to push his mom to immediately put him in swimming lessons. I think it's safe to say that Jones learned how to swim well — and then some.

"I feel very close to the mission statement when it comes to saving lives and when I see that those giant statistics are still as bad as they are, even though we've seen some of them get better, I still know that I could've been one of those numbers. And I think that's what still drives me."

Though Jones didn't expect his swim lessons to lead to a career as a professional swimmer, he's immensely grateful for the chance to help other kids learn to swim, particularly those who are historically underrepresented at the pool.

In 2010, approximately 70% of black kids and 60% of Latino kids had little or no swimming ability, compared with 42% of their white peers. Thankfully, those numbers have steadily improved. Currently, those percentages have dropped to 64% and 45%, a reduction Jones thinks is due in large part to a changing narrative around the importance of learning to swim.

"There's always been a stigma that black people don't swim. It's been a running joke in our culture," says Jones. "It's also something that we have accepted as a culture. And I think that that's why these lessons are so important because you're changing the perception of a culture."

"You never know what can happen, but it's better to teach your child how to be safer on the water, than to limit them." Jones says. "Let your child be successful around water because your child's going to want to be around water. Especially now because it's hot. Every single place that I say to the kids, 'How do you like being in the water now?' and every hand shoots up in the air. It's important that we teach them how to be safer around that water."