Could you live in this delightfully tiny home? Eco-advocates sure hope so. 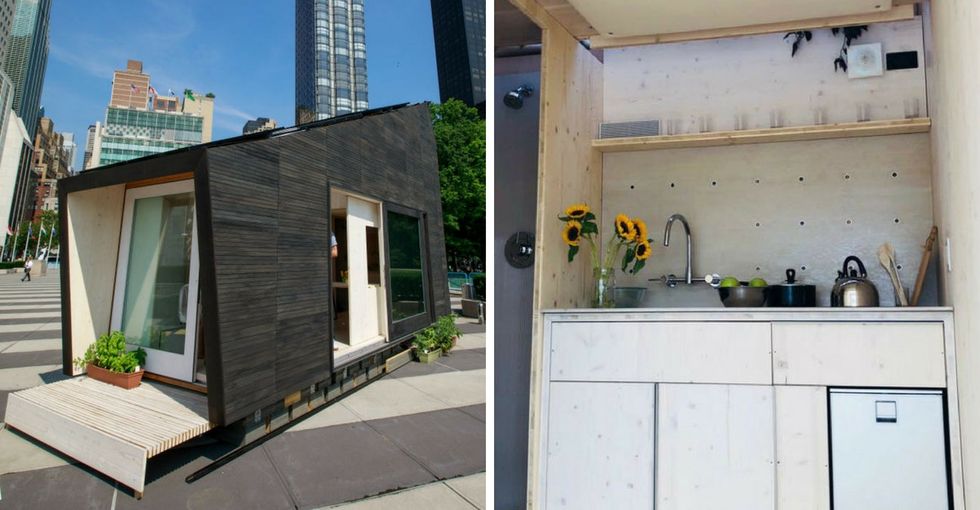 When you think about climate change, what comes to mind?

I immediately imagine smokestacks billowing black soot, congested highways with idling cars, and millions of unassuming, gassy cows hanging out on the prairie. I don't, however, think about the house I live in — but I should, if you ask a climate scientist.

The housing sector is responsible for over one-third of global greenhouse gas emissions, according to the United Nations.

And that's what makes this amazing tiny house all the more spectacular.

The house, set up in New York City's U.N. Plaza between July 9-18, was built through a collaborative effort between U.N. Environment, U.N. Habitat, and Yale University. And its features are pretty darn remarkable.

Could this tiny house represent the homes of the future?

Many environmentalists certainly hope so.

The house was constructed using only locally sourced and bio-based materials. It runs on solar energy, has on-site water collection for in-home use, and uses plants to keep the interior air pure and fresh.

The home even has a "micro-farming wall" on its exterior so that potential residents can eat (very) locally.

The tiny home movement has been picking up speed in American culture as more people trade large houses on big properties for a simple, cheap, and sometimes mobile alternative.

But beyond relishing in any short-lived lifestyle trend, the U.N. module home is aimed at helping solve two dire global problems in the long term:

The tiny home is a two birds, one stone solution.

While this particular tiny house in New York will be moved this month, U.N. Environment plans to build future iterations in different countries to continue pushing for solutions-based design.

"Adequate housing is at the heart of sustainable urbanization," according to Maimunah Mohd Sharif, executive director of U.N. Habitat. "If adopted widely, this practice can create jobs and prosperity with lower greenhouse gas emissions."

Sounds like a win-win for our world to me.