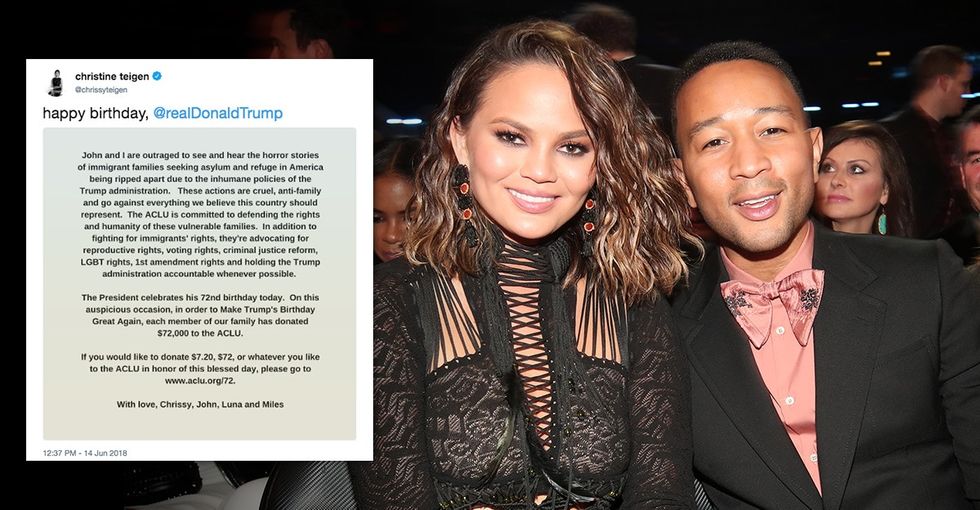 Chrissy Teigen is no fan of Donald Trump, which is why her plan to "Make Trump's Birthday Great Again" had people like 👀.

In honor of the president's 72nd birthday, Teigen, her husband John Legend, and their two children, each chipped in a cool $72,000 for an unforgettable present: a massive donation to the American Civil Liberties Union.

Posting on Twitter, Teigen explained how you can get in on the gift as well.

"John and I are outraged to see and hear the horror stories of immigrant families seeking asylum and refuge in America being ripped apart due to the inhumane policies of the Trump administration. These actions are cruel, anti-family and go against everything we believe this country should represent. The ACLU is committed to defending the rights and humanity of these vulnerable families. In addition to fighting for immigrants' rights, they're advocating for reproductive rights, voting rights, criminal justice reform, LGBT rights, 1st amendment rights and holding the Trump administration accountable whenever possible.

The President celebrates his 72nd birthday today. On this auspicious occasion, in order to Make Trump's Birthday Great Again, each member of our family has donated $72,000 to the ACLU.


The ACLU does a lot of great work, and in the Trump era, they're more needed than ever.

The ACLU is fighting back against actions the administration has taken on asylum seekers at the southern border, they've taken the administration to court over the so-called Muslim ban, they're advocating for detained immigrants and asylum-seekers and their right to reproductive health care, they're making strong arguments against anti-LGBTQ discrimination, they're speaking out against unjust government surveillance, they're fighting against U.S. citizens being sent to other countries without due process — and so, so, so much more.

It's important to remember that the ACLU isn't a partisan organization, which is a good thing. The government must be held accountable by the people no matter who's in charge.

If you want to get in on the action, head on over to aclu.com/72 to help fund the fight for the rights of all of us.