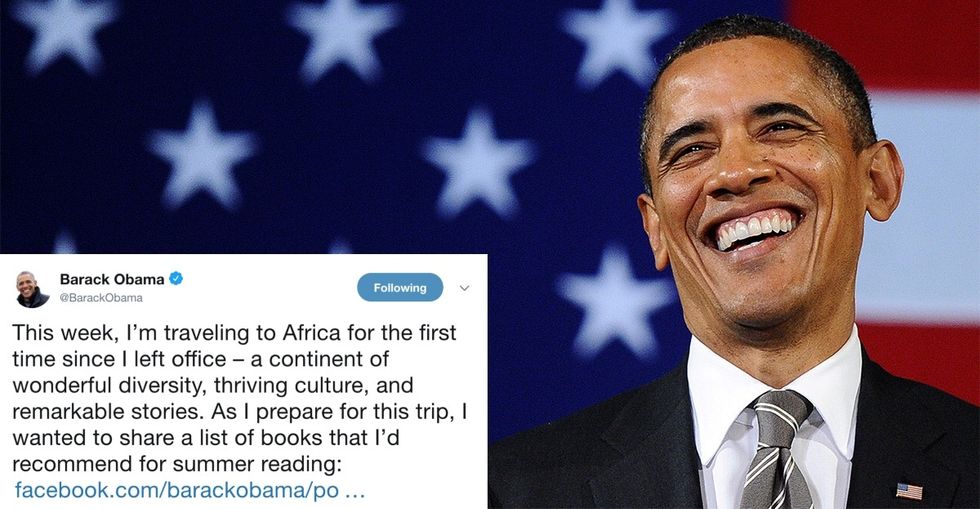 For the first time since leaving office, former commander-in-chief Barack Obama is headed to Kenya and South Africa to visit the Obama ancestral home, convene 200 young leaders across the continent, and deliver a speech to mark the anniversary of Nelson Mandela's 100th birthday.

While his schedule is jam-packed, Obama managed to make a reading list for his followers before leaving.

Barack Obama recommended six books, the majority of which are authored by African writers.

This week, I’m traveling to Africa for the first time since I left office – a continent of wonderful diversity, thriving...

"Things Fall Apart" by Chinua Achebe, "A Grain of Wheat" by Ngũgĩ wa Thiong'o, and "Americanah" by Chimamanda Ngozi Adichie are just a few. They tell stories ranging from the pervasive impacts of colonialism to an African nation's story before foreign influence to the Nigerian immigrant experience in America. In short, they tell the stories of a remarkably diverse continent, all through the words of people that are connected to it in their own unique ways.

While Obama has released a recommended reading list many times in the last few years, this year's list is particularly important. In the past, political figures and educators alike have centered the stories of white, straight men. While these stories have certainly influenced our society, they are by no means the only stories that exists, nor the only stories that should be told.

Obama is increasing exposure to a largely unexplored literary world of African writers and is helping to make space for diverse storytelling.

As Adichie — one of the novelists Obama recommends — once said in a viral TedTalk, there is a danger in telling a single story. When society only supports stories that feature a singular perspective, we fail to recognize the experiences of immigrants, queer folks, people of color, disabled people, and other underrepresented groups.

Through his summer reading list, Obama is helping make writers like Thiong'o and Adichie as commonly known as Ernest Hemingway and Harper Lee.

Judging by the description of these books, it seems like readers are in for a super fun literary ride.

Wear your values with products from PSA Supply Co., an independent site owned by our parent company, GOOD Worldwide Inc. GOOD makes money when you buy these products, and 10% of profits go to The Center for Community Change Action. Use discount code UPWORTHY to get 15% off your first order!
popular