Chance the Rapper to bring coats to Chicago's homeless population ahead of winter cold.

Chicago winters can be deadly, but this local musician is trying to help. 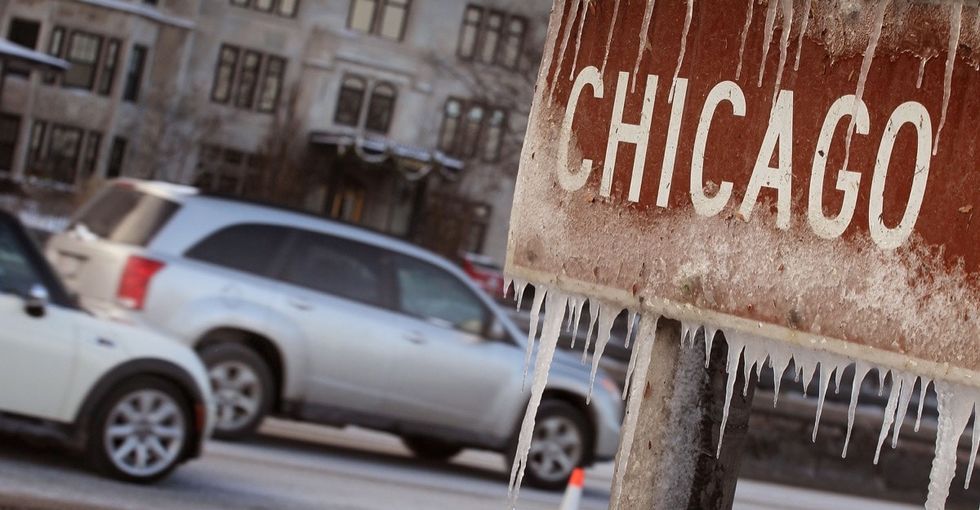 And I say that as someone who has spent all 29 years of her life living in and around my dear Chicago city by the lake. Winters here aren't just "brrr, I'm feeling a little chilly," they're full on having to worry about losing a few digits if you leave your fingers exposed to the cold winter air for more than a few minutes.

In so many ways, you are the worst, Chicago. ... Why can't I quit you? Photo by Scott Olson/Getty Images.

I can't even imagine how bad it must be to be homeless and have to endure sub-zero Chicago winter weather.

Sadly, many aren't able to endure the city's fatal freeze. And with an estimated 125,000 homeless Chicagoans gearing up to take on the winter, they could really use some help now more than ever.

A 2011 snowstorm shut down Lake Shore Drive, one of the city's busiest streets, leaving it looking like a scene out of "The Walking Dead." It gets so cold and snow can get so high that cars stop running, engines don't work. Photo by Scott Olson/Getty Images.

And that's where Chicago-born artist Chance the Rapper comes in.

"They say I'm saving my city, say I'm staying for good / They screaming Chano for mayor, I'm thinking maybe I should," Chance raps in "Somewhere in Paradise," one of two songs he premiered on the "Saturday Night Live" stage last week.

His history-making performance — he was the first independent artist to appear as a musical guest on "SNL" — got rave reviews, but it's those lyrics and how he's living up to them that's making news today.

Here's Chance performing at the 2014 Made in America Festival. Photo by Christopher Polk/Getty Images for Anheuser-Busch.

So how is he "saving his city"?

On Dec. 16, 2015, Chance launched Warmest Winter 2016, a fundraising effort to help raise money to get coats to Chicago's homeless population.

His goal is to raise $100,000 — enough money to manufacture 1,000 EMPWR coats from The Empowerment Plan, a Detroit nonprofit.

The coats are self-heating jackets made from upcycled auto insulation, Carhartt fabric, and donor-provided materials. They can be turned into a sleeping bag and transform into an over-the-shoulder bag for carrying items.

Here's a bit from the EMPWR website (emphasis added):

"The Empowerment Plan can produce 1,000 coats on a budget of $100,000. Our studies show that for each 1,000 coats distributed, we can save 14 lives and reduce healthcare costs by $58,800 annually. Also, each recipient of an EMPWR Coat will make at least one less emergency room visit per year due to hypothermia. Assuming an average cost of $4,200 per visit, we estimate reduced healthcare costs of $58,800 for every 1,000 coats we distribute. Each year approximately 7% of homeless individuals die from hypothermia. Our coat reduces this statistic by over 20%."

It's not the first — and almost certainly won't be the last — time Chance will do something great for people in need.

Earlier this year, he helped find jobs for 500 people on Chicago's south side. And just months before that, he surprised a group of kids with a trip to the Field Museum.

And here he is at Coachella 2014. Photo by Kevin Winter/Getty Images for Coachella.

In 2014, he used his influence on social media to effectively call for a citywide ceasefire over Memorial Day weekend. And for 42 peaceful hours, not a single person in the city was shot.

Now, of course, that's not to say Chance is without his flaws or controversies. Some have argued that lyrics on some of his older songs are misogynistic and homophobic.

That said, the work he's doing off the mic is saving and enriching the lives of others, and that's worth a whole lot.

So, if you're looking for a cause to donate to — one that will literally save lives — consider Chance's Warmest Winter.

There'll be a lot of chilly Chicagoans ready to thank you.

The temperature on the day this picture was taken? Minus-16 degrees. Yikes! Photo by Scott Olson/Getty Images.

"I cried, and I'm not even American!" That's one of the thousands of comments posted on the newest Black Eyed Peas video, which has been viewed more than 28 million times in one week on YouTube. "THE LOVE" with Jennifer Hudson and Black Eyed Peas was produced by will.i.am and it might be the most powerful campaign-ad-that's-not-actually-a-campaign-ad that's ever been made.

The video is a remake of the Black Eyed Peas' popular song "Where is the Love," but with revised lyrics and a powerful opening of Jennifer Hudson singing along with Joe Biden's DNC speech. As Biden recalls the events of Charlottesville, the video shows clips of news coverage from three years ago, followed by the prayerful chorus, "Father, father, father help us. Send some guidance from above, because people got me, got me, questioning, 'Where is the love?'" Soon will.i.am comes in rapping about the hatred in the world today, we see more of Biden's words backed up by the music, and the effect of the whole thing is just deeply moving.

People are confused whether this audio clip says 'green needle,' 'brainstorm' or both

Vote with your dollar: 8 products that help combat climate change