After the Brussels attack, many opened their homes to stuck travelers. She got in her car. 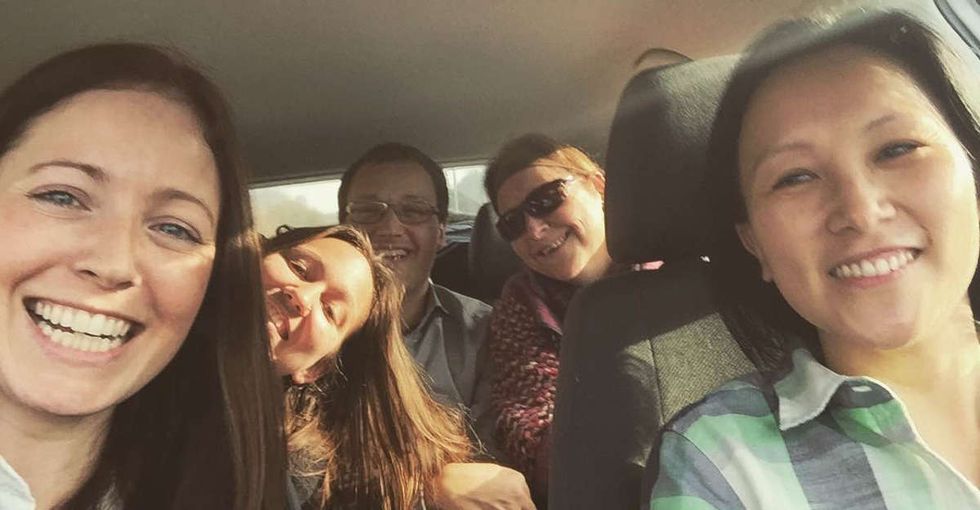 Ann Glorieus was working from her home in Brussels when she heard that bombs had exploded at the city's airport and in the Maelbeek subway station.

Her thoughts immediately turned to the hundreds of travelers stranded by the attacks. With trains and flights on hold throughout the country, Glorieus decided to press her car into service.

"Nothing is so depressing as being stuck somewhere when all you want to do is be at home," Glorieus told Upworthy.

Glorieus was one of hundreds of Belgians who used the Twitter hashtag #IkWilHelpen ("I want to help") to offer support and services to those impacted by the bombings.

Residents of Brussels and cities across the country offered rides to far-off cities, resting places, and lodging to those who were unable to get where they were going due to the shutdowns.

While many of the drivers who posted on the hashtag said they'd happily pick up passengers along their route, Glorieus went the extra mile.

A blocked highway at the Brussels airport. Photo by Thierry Monasse/Getty Images.

According to Glorieus, she initially made two trips from her home in Brussels, driving three people to Aalst, about 30 km away. Then, she returned to the city, picked up four more people, and drove them to Antwerp, about 45 km away.

Later that evening, she made a third run, picking up four college students who were stranded in central Brussels and driving them to Antwerp, returning home close to 1 a.m.

Quinten de Raedt, one of the riders on Glorieus' second trip, told Upworthy via Twitter that none of the passengers in his group realized Glorieus was driving miles out of her way until it slipped into conversation in the car.

"She just thought she should do something for the people stuck in Brussels and decided she could play ... taxi."

Enormously grateful for the ride home, de Raedt called it an "act of pure generosity, kindness, and social responsibility."

The rides, he said, along with the dozens of Belgians who were giving blood and offering refuge, were a small, unexpected source of comfort on a horrible day.

"We were all surprised at the amazing willingness of everybody to help," de Raedt said.

Glorieus said that while there was "no upside to this madness," it felt good to be able to do something.

Even something as simple as giving a lift to a few people among the hundreds in need.

"Being able to offer help is actually a plaster for my own sadness," Glorieus said. "Today it made me happy that I could bring people back home when they thought they were going to be hours before arriving home. And maybe, maybe it helps to counter all the ill will in the world."

"Although I suspect it's only a tiny drop of water on a hot plate."