After a massively successful marketing stunt, 2 Chainz put the attention on a good cause.

What an awesome idea. 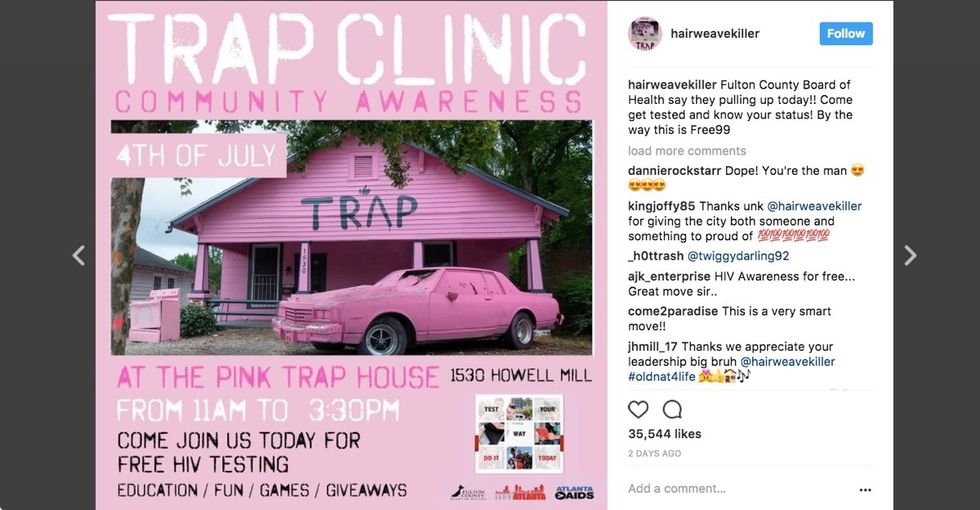 Last month, rapper 2 Chainz decided to rent out a house in Atlanta, paint it a nice shade of Pepto-Bismol pink, scrawl the word "trap" across the front, and open it up to the public as a sort of ad hoc art installation — you know, just normal stuff, as one does.

The whole thing was a marketing gimmick to promote his latest album, "Pretty Girls Like Trap Music," and the project quickly took on a bit of a life of its own.

The pink trap house has been a runaway success, tagged nearly 300,000 times on Instagram in just a couple weeks. Then, 2 Chainz put that attention to good use.

On July 4, 2 Chainz teamed up with the Fulton County Board of Health, Atlanta AIDS, and Test Atlanta to offer free HIV testing to anyone who wanted to stop by the house.

Fulton County Board of Health say they pulling up today!! Come get tested and know your status! By the way this is Free99

1 in 7 people living with HIV in the U.S. doesn't even know it. That's what makes the free HIV screening so important.

More than 1.1 million people in the U.S. are HIV-positive, and those who don't know their status, are most likely to spread the virus. While there's been a lot of progress in how we treat HIV/AIDS over the past several decades, it's still a serious issue that needs attention.

By stepping up and making it easy to get tested, 2 Chainz is fighting the stigma that comes with an HIV diagnosis and helping prevent future outbreaks.

Everyone should know their HIV status. Yes, everyone.

It's easy and free. You can check the Centers for Disease Control website to find a clinic near you.

In the meantime, 2 Chainz's Pink Trap House is open through July 7 (though there's a chance it'll be extended), so if you happen to be in the area, swing by, snap a few selfies, and let the world know you were there!