A tattoo shop's offer to cover up hateful ink went viral. People are taking them up on it. 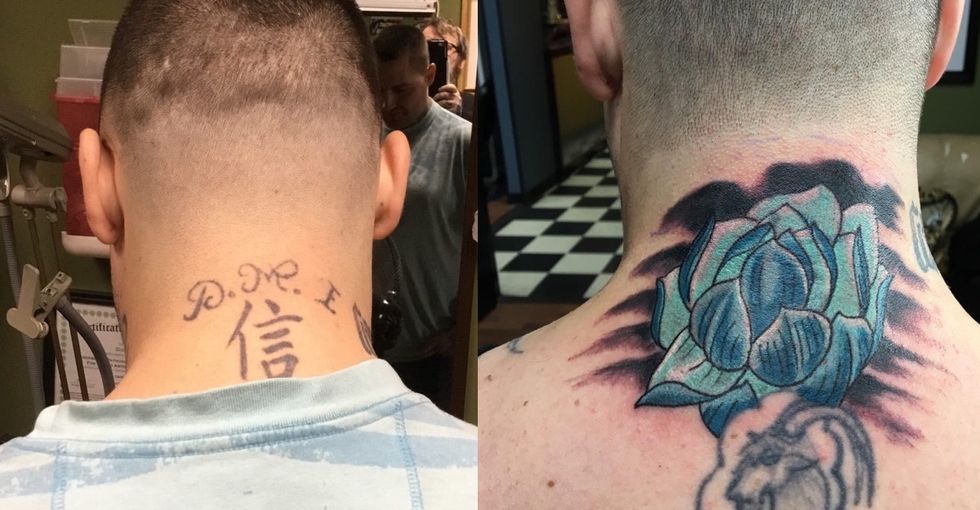 Beth Cutlip, co-owner of Baltimore's Southside Tattoo parlor, was working one day when a man walked in with some unmistakeable ink.

The man's face was covered in gang tattoos, Cutlip says, and he was there to have them covered up. He got them as a teenager while running with a rough crowd, but he was a grown man now. Married. Kids. Trying to make an honest career as an electrician.

The tattoos, Cutlip recalls him saying, made people nervous when he came into their homes to do work. He needed them gone.

But they were just too big.

"As much as I wanted to help him, I had to refer him to have them removed. But I don't think he had the money," she says.

Later, when recounting the story to her husband and co-owner, Dave Cutlip, she knew there had to be a way to help people like that.

"I said, 'Dave, these people made a mistake, changed their life, and they need to get these tattoos covered up,'" she says. "He looked at me and said, 'Are you asking me to tattoo people for free?'"

Dave agreed to set aside time in the shop, once a week, for people to come in and have hateful or violent tattoos covered up, free of charge.

Beth posted a small announcement on the parlor's Facebook page, thinking a few hundred people might see it and think it was a good idea.

Soon, messages poured in from all over the country and world. There were thousands and thousands of people trying to get rid of permanent ink that didn't reflect who they were anymore.

Southside Tattoo is now completely booked with cover-ups, and Beth has been working with other parlors around the country to help people outside the Baltimore area.

They've even begun setting up a nonprofit to help pay for the work. Beth says some of the funds they've raised go toward helping people in more remote areas travel to somewhere they can have the work done properly and safely.

His arms said "white" and "power." Beth and Dave covered up the "white." Photo by Southside Tattoo, used with permission.

Beth says everyone she works with has a different story, but they all have one thing in common: They're trying to build a better life.

Along with gang tattoos, "I am seeing so many swastikas, Aryan Brotherhood, things like that," Beth says. Some get inked up in prison to fit in, for safety. Others are just trying to leave their old ways behind.

Either way, Beth and her husband are happy to help.

Together, Beth and Dave are helping people prove it's never too late to change. And that's a message we all need to hear right now.